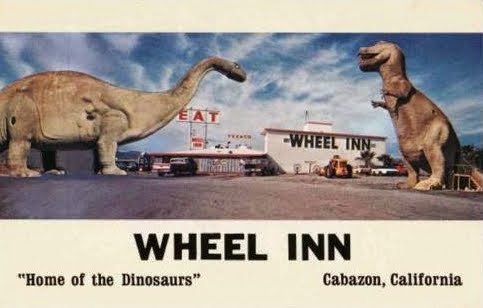 To continue my Pee-wee fix...!


While we were in California, primarily for Disneyland,  we did carve out a day to seek other fun things to experience in the Los Angeles area. One day is certainly not enough but we narrowed it down to three 'Must-Do' places.   On the top of my list was somewhere I honestly never dreamed I would ever get to go to in my life!
The Cabazon Dinosaurs!
You know the ones, featured in the 1985 Tim Burton classic film, Pee-wee's Big Adventure.
I love dinosaurs and I love Pee-wee.

Now, Let's talk about your big but. 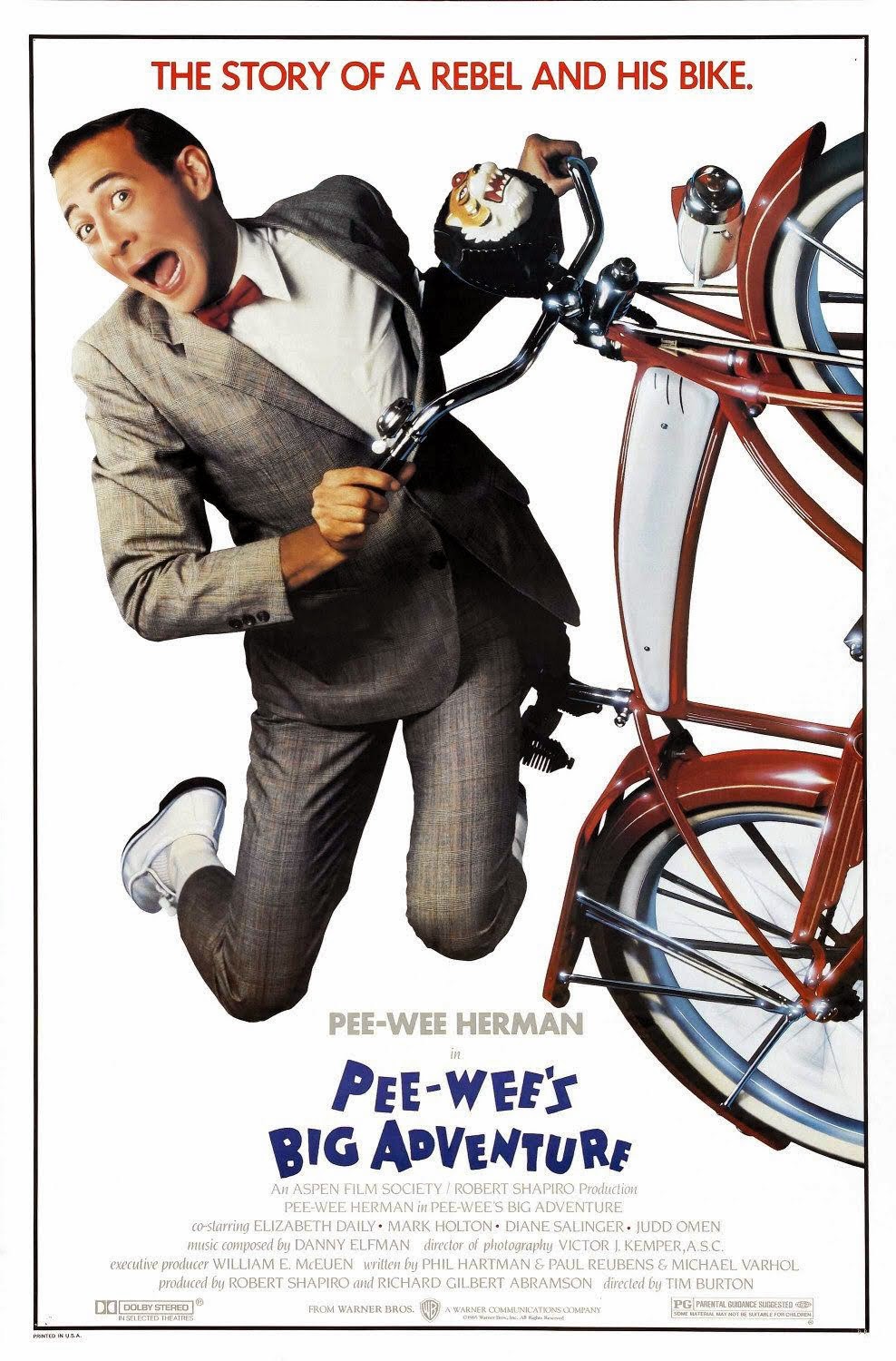 Here is a scene from the movie with PW trekking in front of Mr. Rex and Dinny. 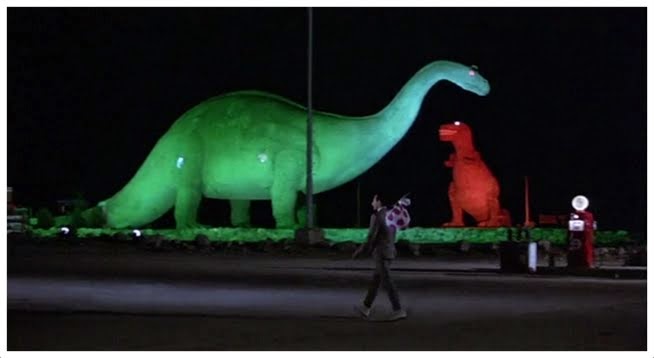 I am not sure how, but I captured almost the same image sans Pee-wee! 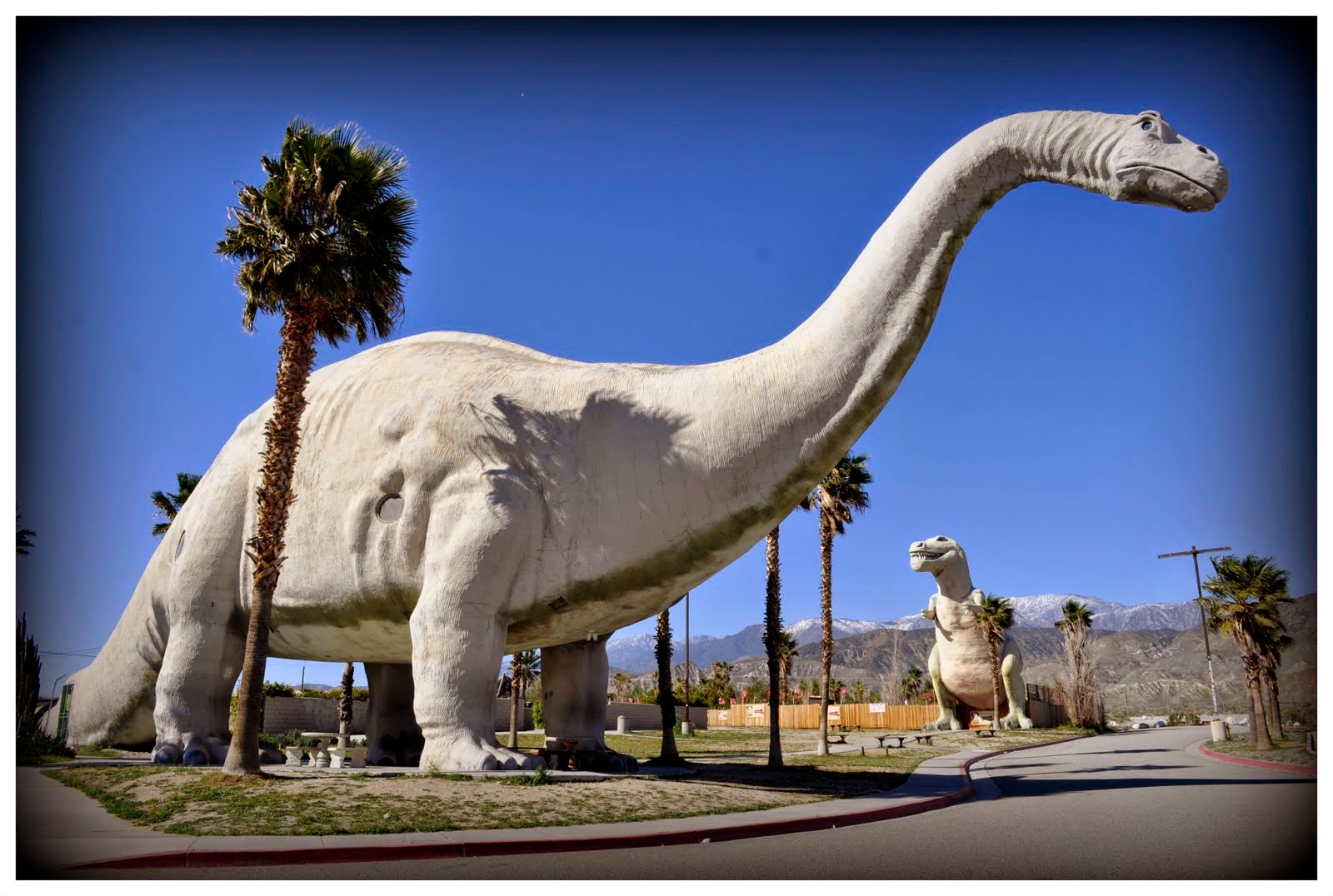 In modern day, Mr. Rex has his ass behind a privacy fence, along with a creationist museum. 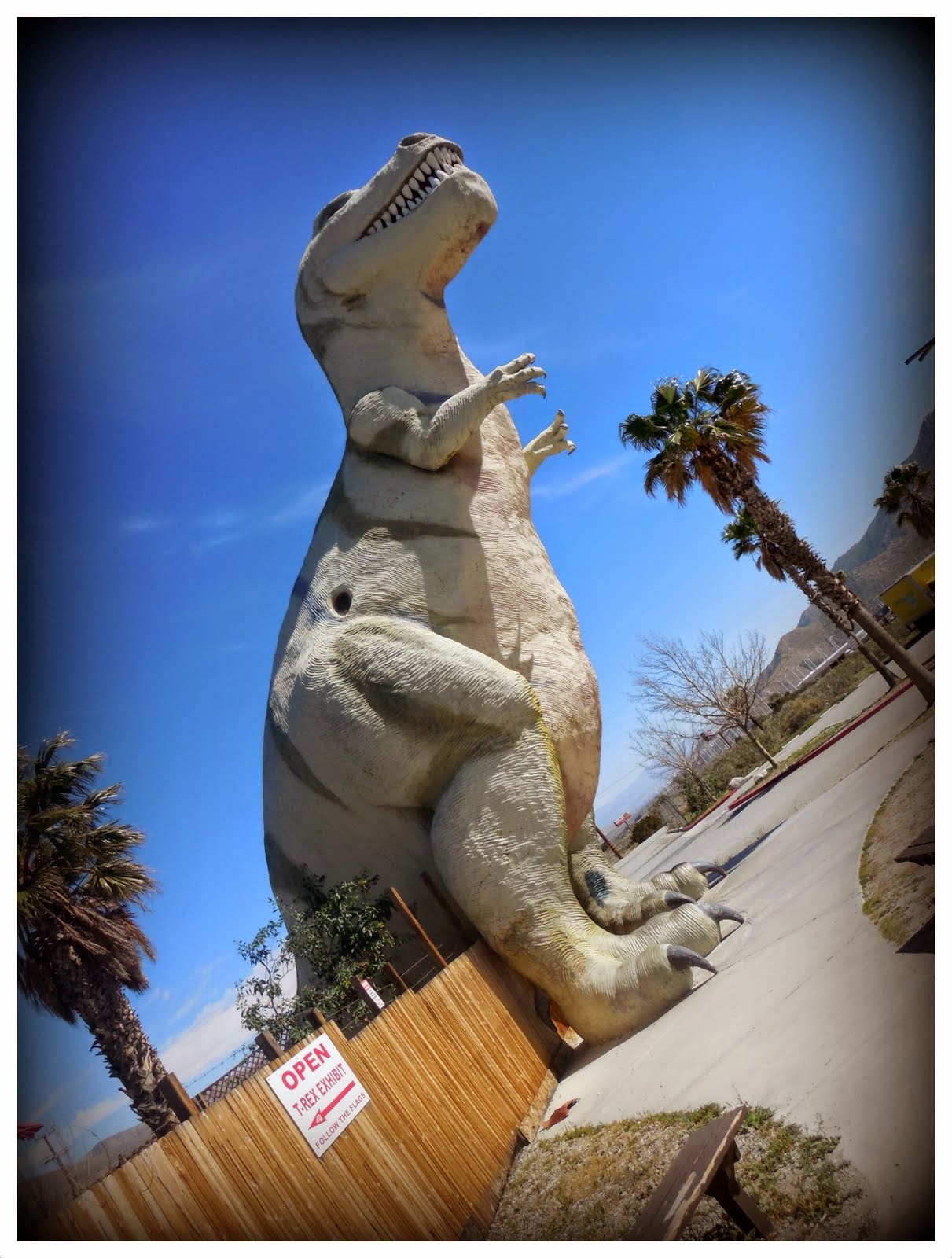 One of my favorite parts of the movie is the Large Marge /Trucker Diner/ Big Dinosaurs section. The scene when PW and Simone are watching the sunrise while within the T-Rex mouth's vast tongue and teeth laden auditorium is quite lovely. 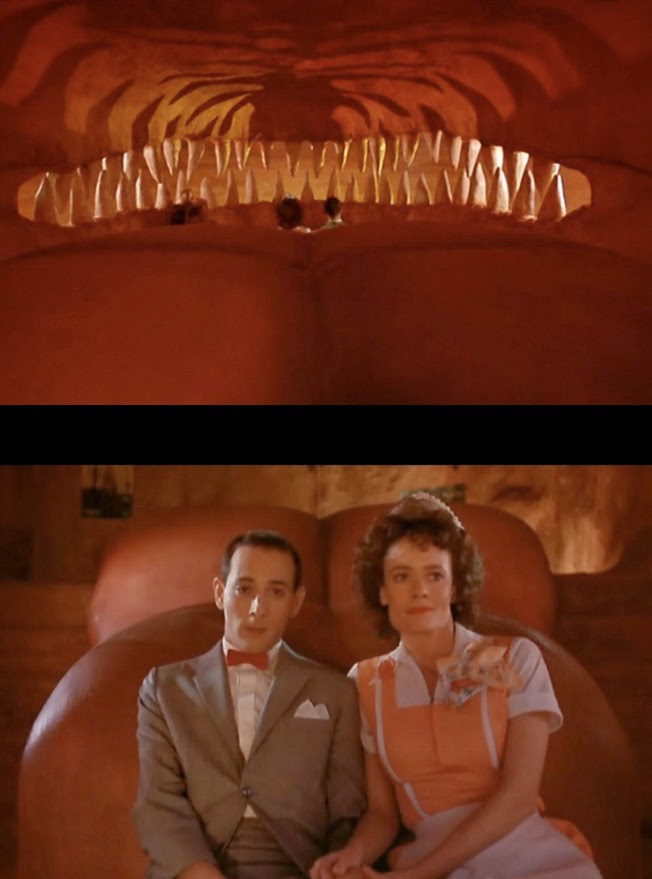 I longed to be able to sit in the same spot and gladly paid the 9 buck entrance fee for that chance.
Well, as I have mentioned before I lead a bit of a sheltered life and didn't know that spot was mostly movie magic.  Tim Burton inspired for sure. 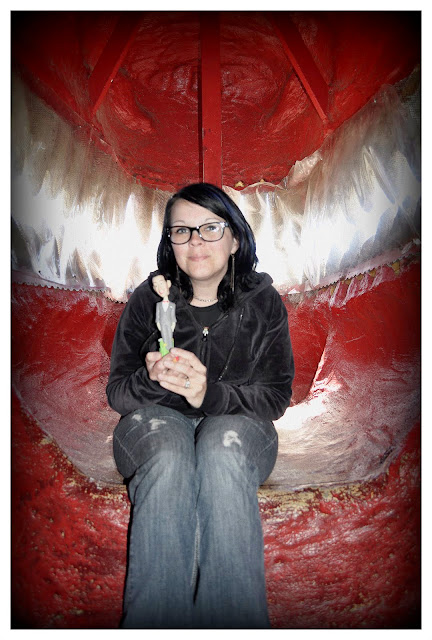 This is the view that is actually to be had.  At least Pee-wee accompanied me up there so we could discuss our dreams.  Mine involve doughnuts as well. 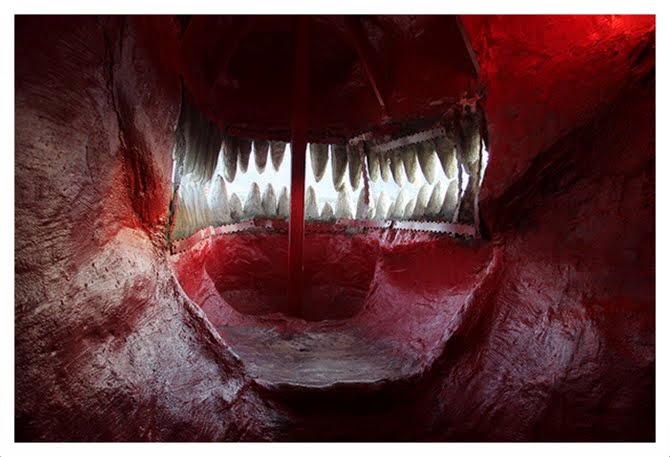 Here is a view sans me. 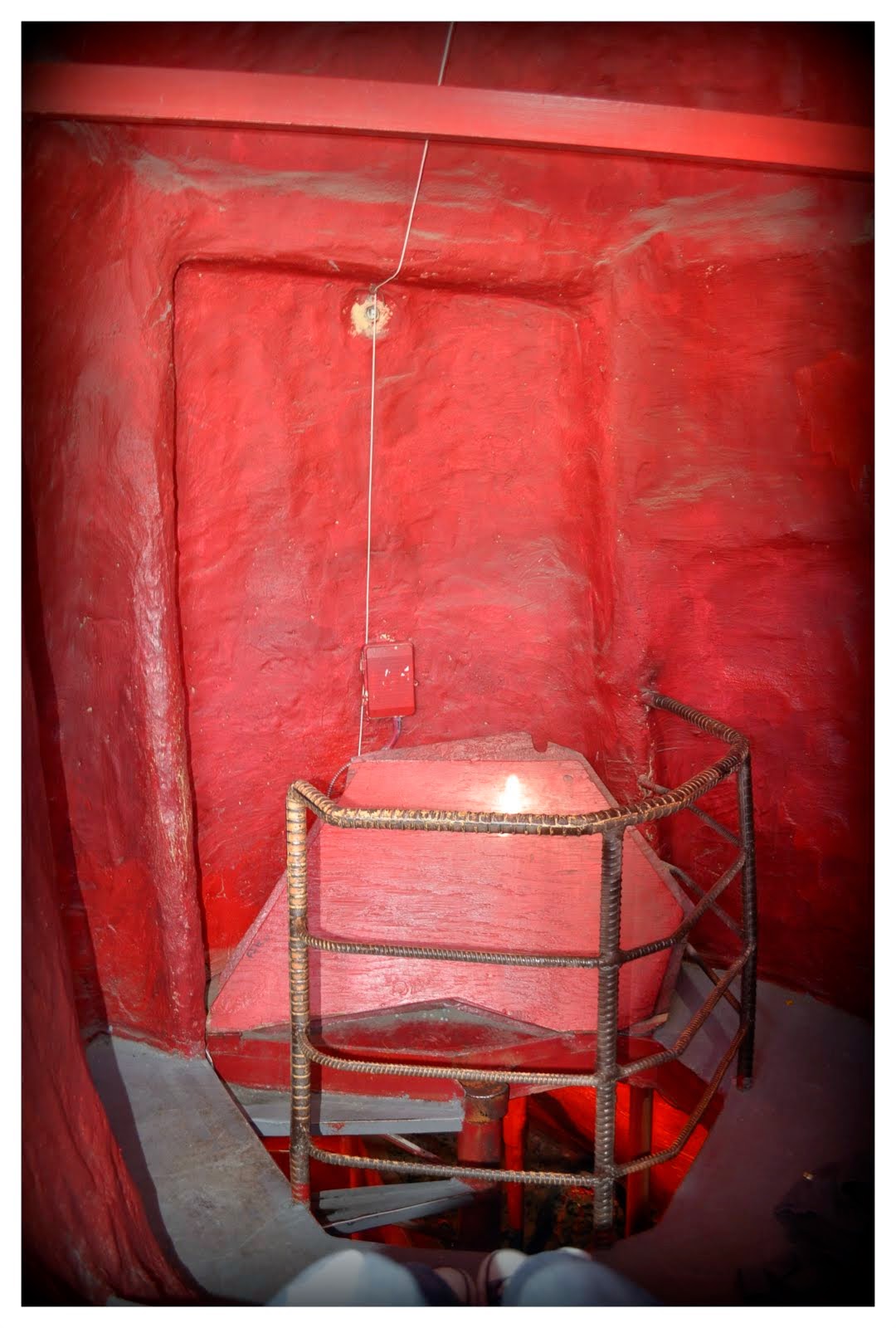 And this is the sight behind the mouth area...no big tongue to sit on.  However I thought that cover-overed doorway was interesting.  With a bit of sleuthing into the history of the dinosaurs I think I figured it out.

But first things first:
The dinosaurs were designed by a Knotts Berry Farm sculptor and artist named Claude Bell. He was looking for a way to attract customers to his roadside restaurant, The Wheel Inn, which opened in 1958.

First came Dinny (pronouced Dine- ee) the Apatosaurus, whose construction started in 1964.  He took 11 years to finish.   This was in part because Mr. Bell was doing most of the work solo, though it is rumored he paid a friend one dollar and a pack of Dr. Pepper to paint Dinny. It also took time to collect the materials which were salvaged from the construction of near-by Interstate 10.   Dinny wound up being a 150 ton 45 foot tall concrete sculpture with a gift shop held in his innards.

Originally, Mr. Bell wanted to install a large slide down Rex's back but this never quite came to be. Mr. Bell passed away in 1988 and the slide was filled with concrete.
So that's the deal.  Visitors could climb the steps inside Mr. Rex, enjoy the view from his mouth and then slide back down on his tail, hence the doorway.  Magical.

The dinos have been used for several other Hollywood features: films, music videos, a video game, an album cover and in a novel.   Most notable is Tears for Fears, 'Everybody Wants to Rule the World' video and in a flashback scene in Pixar's movie "Inside Out".
On the commentary track of Pee-wee's Big Adventure is a sweet story told by Paul Reubens and Tim Burton about getting to met Mr. Bell and having such an admiration for him. 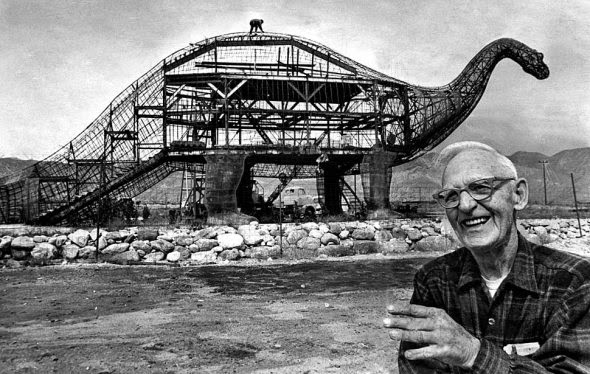 Here is an image of Claude Bell during the construction of Dinny.
When we went in February Dinny's innards were not open for perusing. But we did have a good time running and weaving around his legs as Pee-wee did when hiding from Simone's boyfriend, Andy, in the movie. 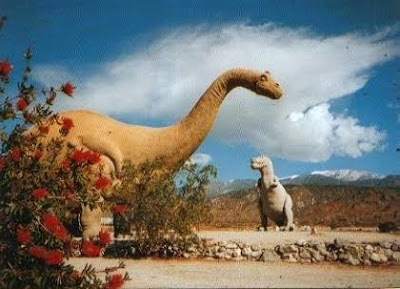 As part of the ticket price, as I mentioned above, is a creationist museum. It is self guided with a few winding overgrown paths with different species of dinosaurs, in varying scale size, that I doubt lived during the same periods in time. 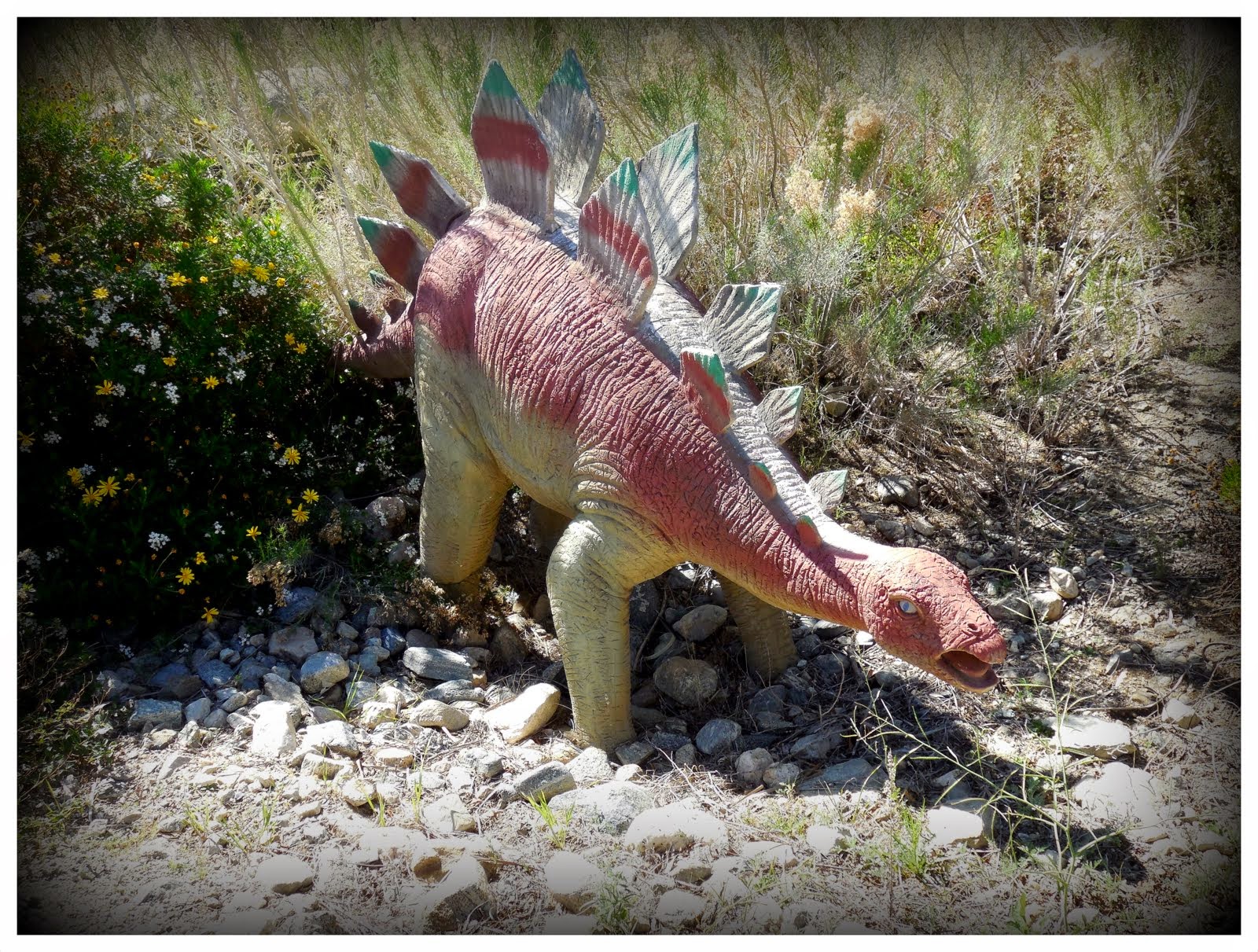 ...or that had this stripey color scheme! 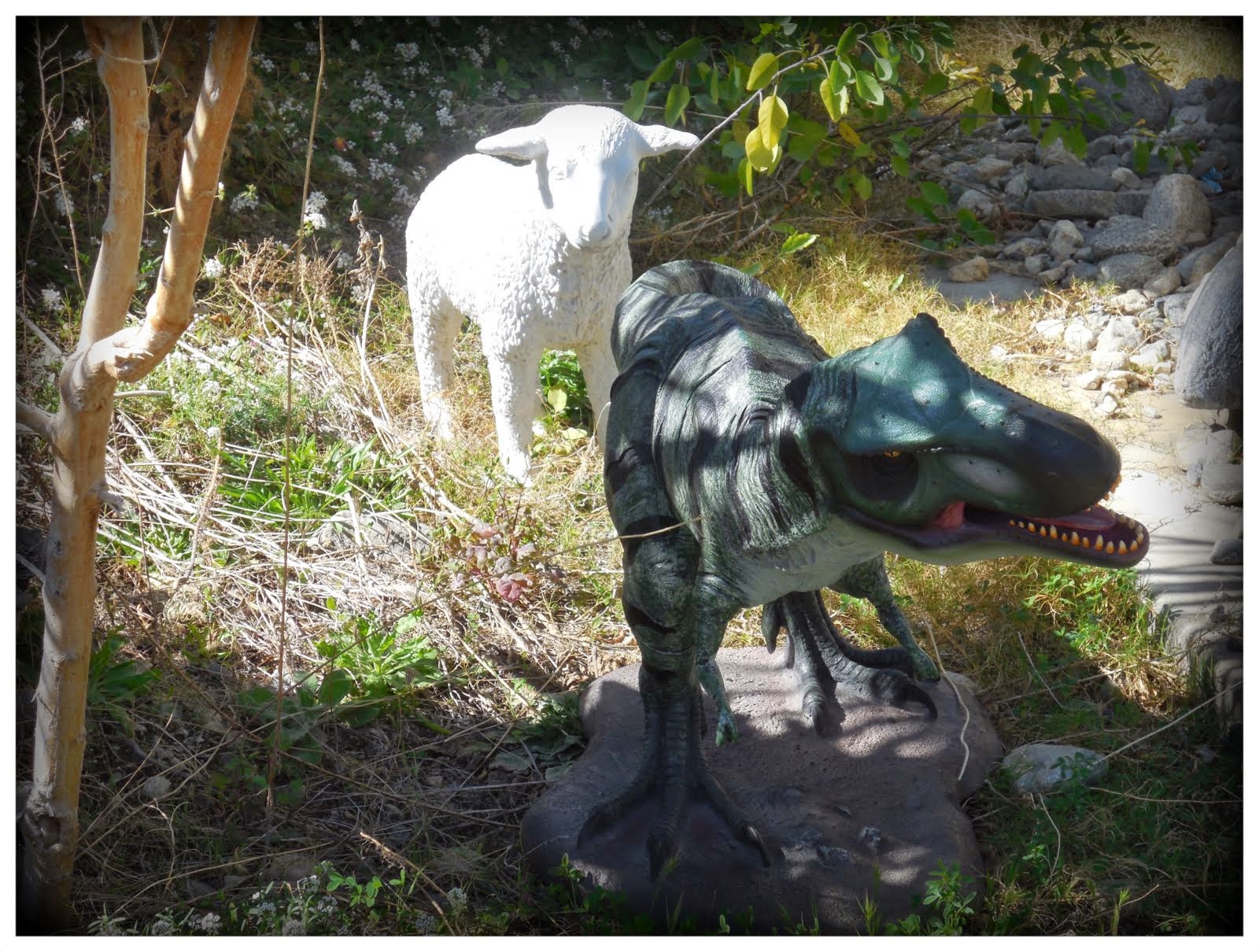 It's a world where lambs and velociraptors can be BFFs! 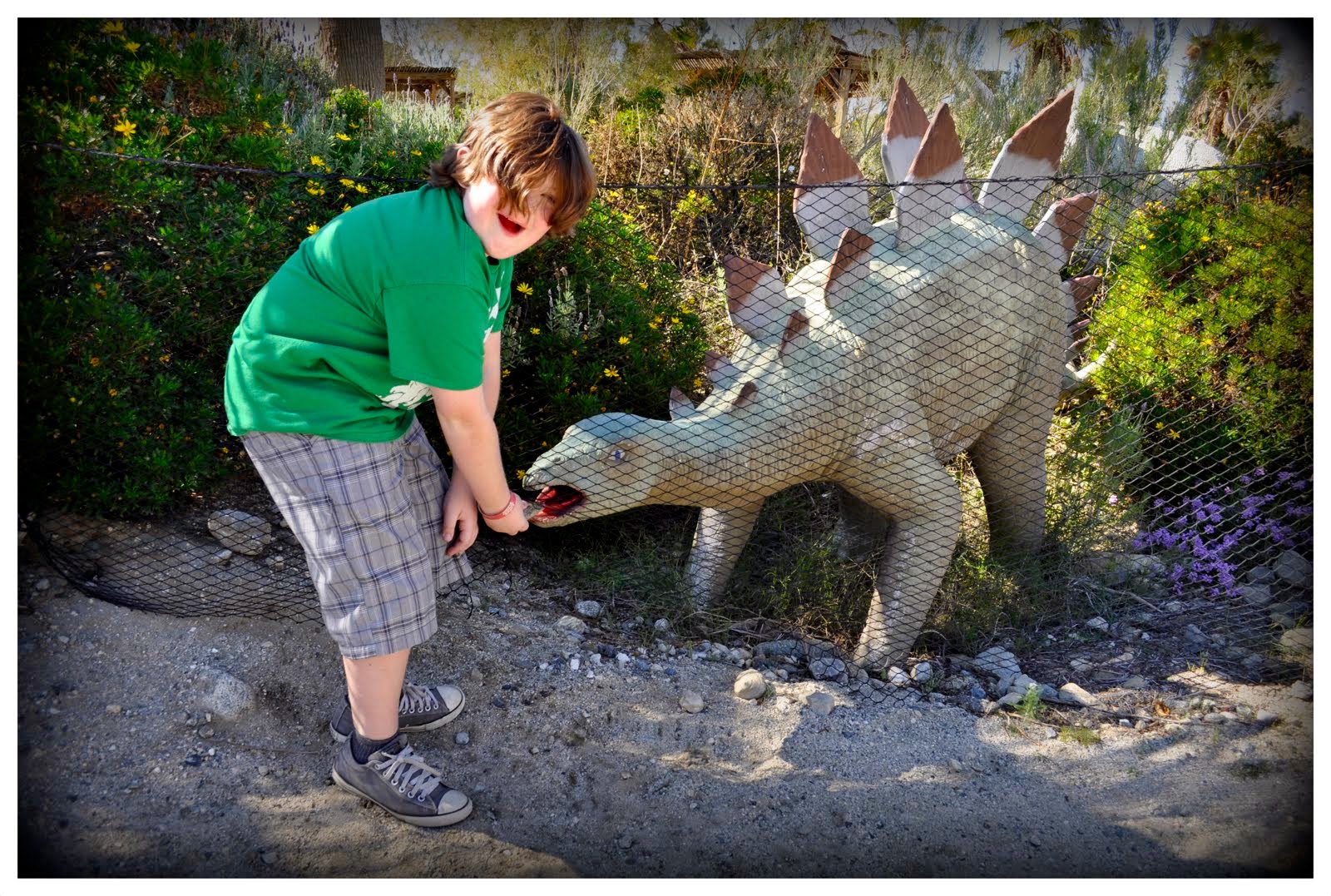 But please don't feed the stegosaurus!

On a night just like tonight... now on to the other 'attraction' on this site from Big Adventure.  I get off right up here... 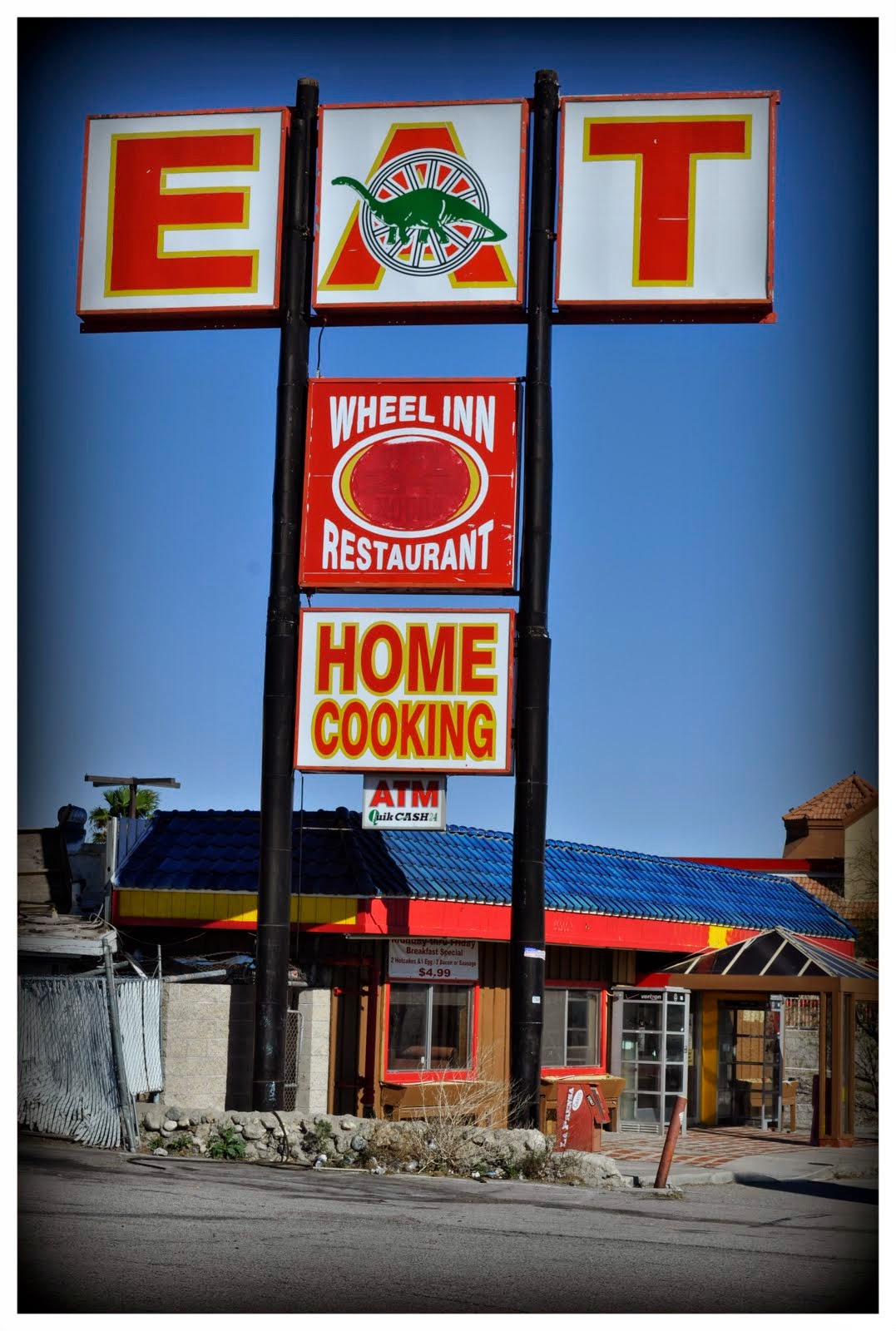 The Wheel Inn is located in front of the large dinosaurs and has remained basically unchanged from when the movie was filmed there.
But, sadly, Large Marge can never send anyone else there again.  It closed in September 2013.

The Wheel Inn is not owned by the same management as the dinosaurs.  It was forced to close due to economical pressures.  It was known for it's peanut butter cream pies, working phone booths for collect calls, and velvet painting gallery where John Wayne and Elvis painting were big sellers. I have read a couple of articles/reviews about the restaurant and it seemed to be a fairly decent place; good food, good prices, and employees that were like family to each other.  Five years ago the waitresses dressed like cave-women as a quirky reference to the beliefs of the dinosaur museum behind them. 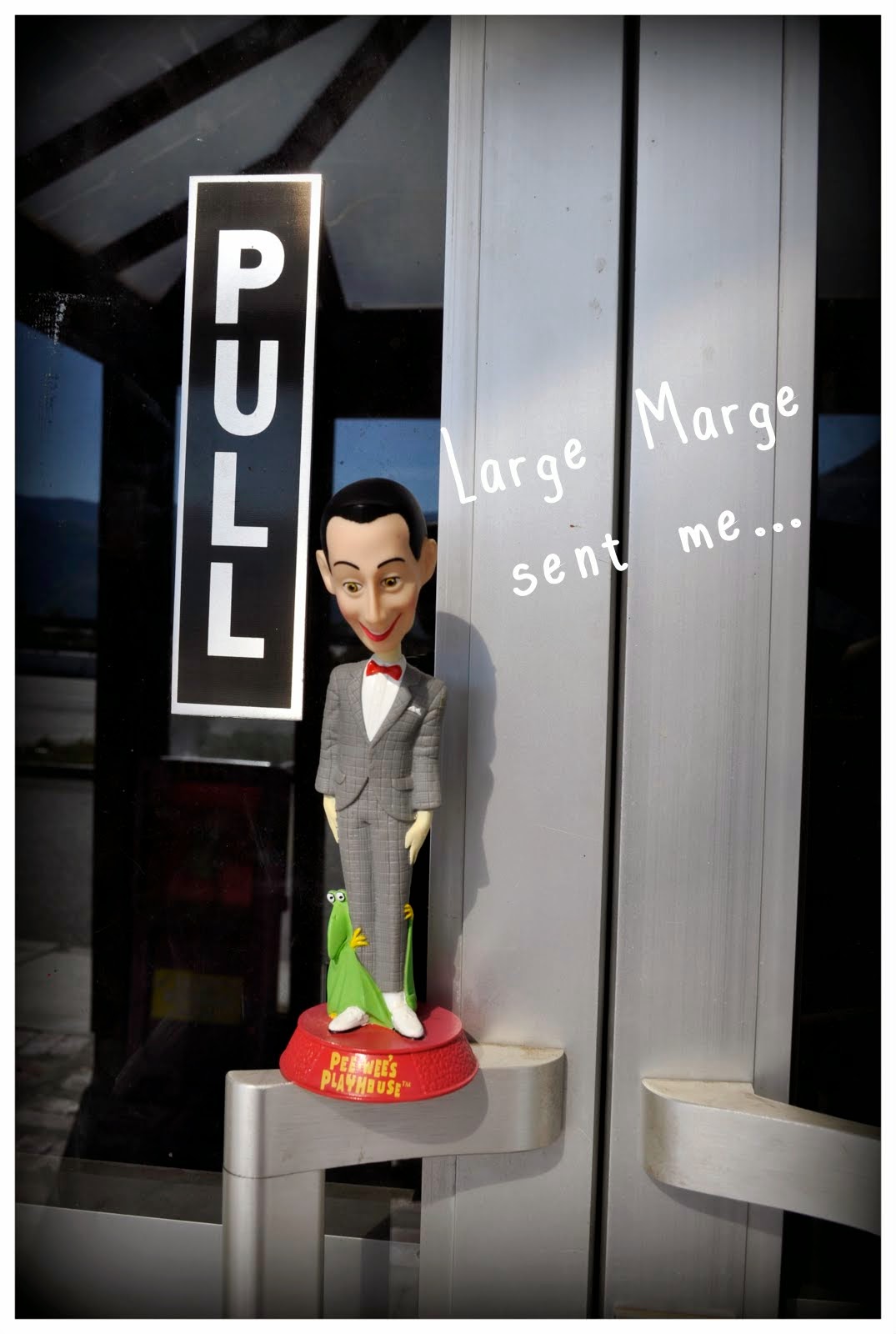 I have also heard good things about the Tuna platter accompanied by a milkshake. 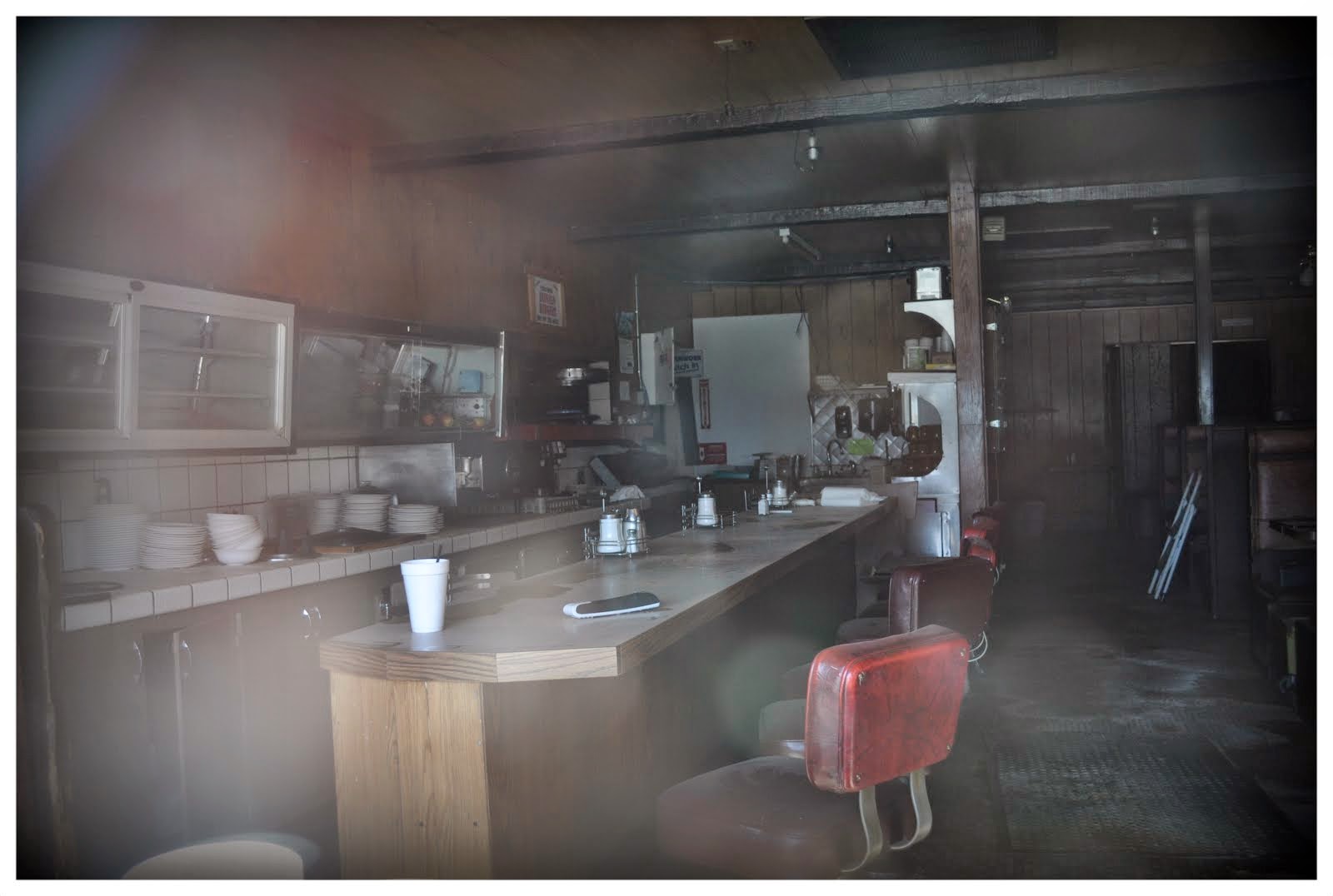 I was able to snap a pic of the interior through the dusty windows.
This is the bar Pee-wee sat at! 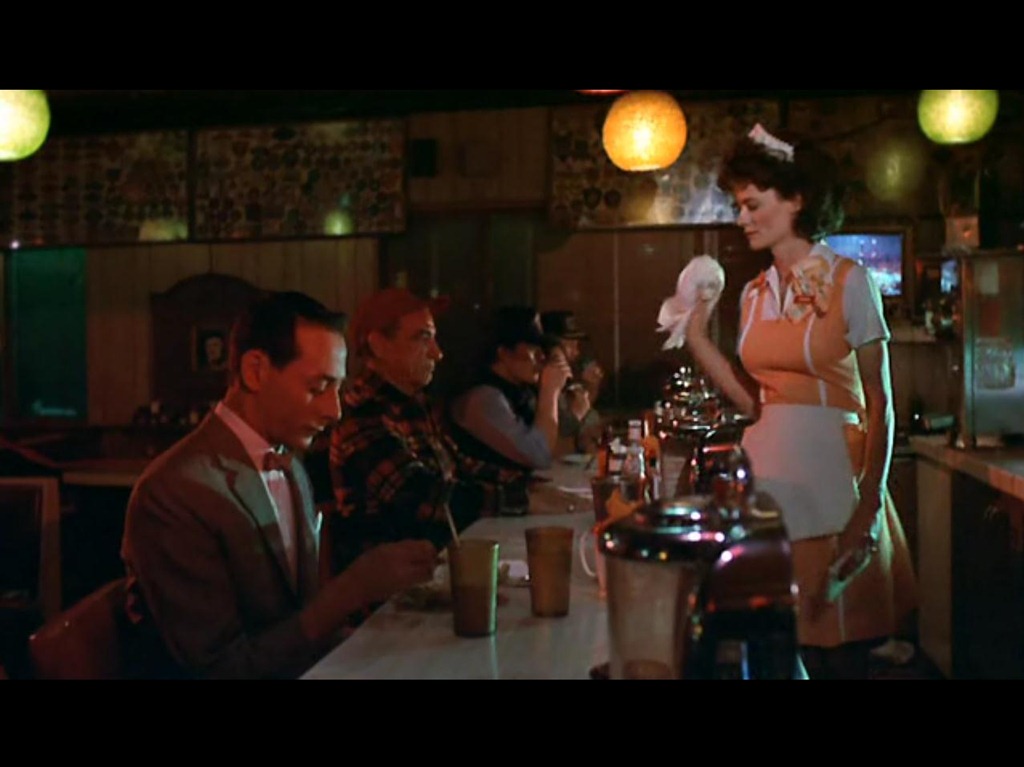 It is a shame the restaurant is not open anymore.  I saw them together as kinda like getting a packaged deal; two fun locations from the film in one spot.
I haven't read anything about what will become of the Wheel Inn property. 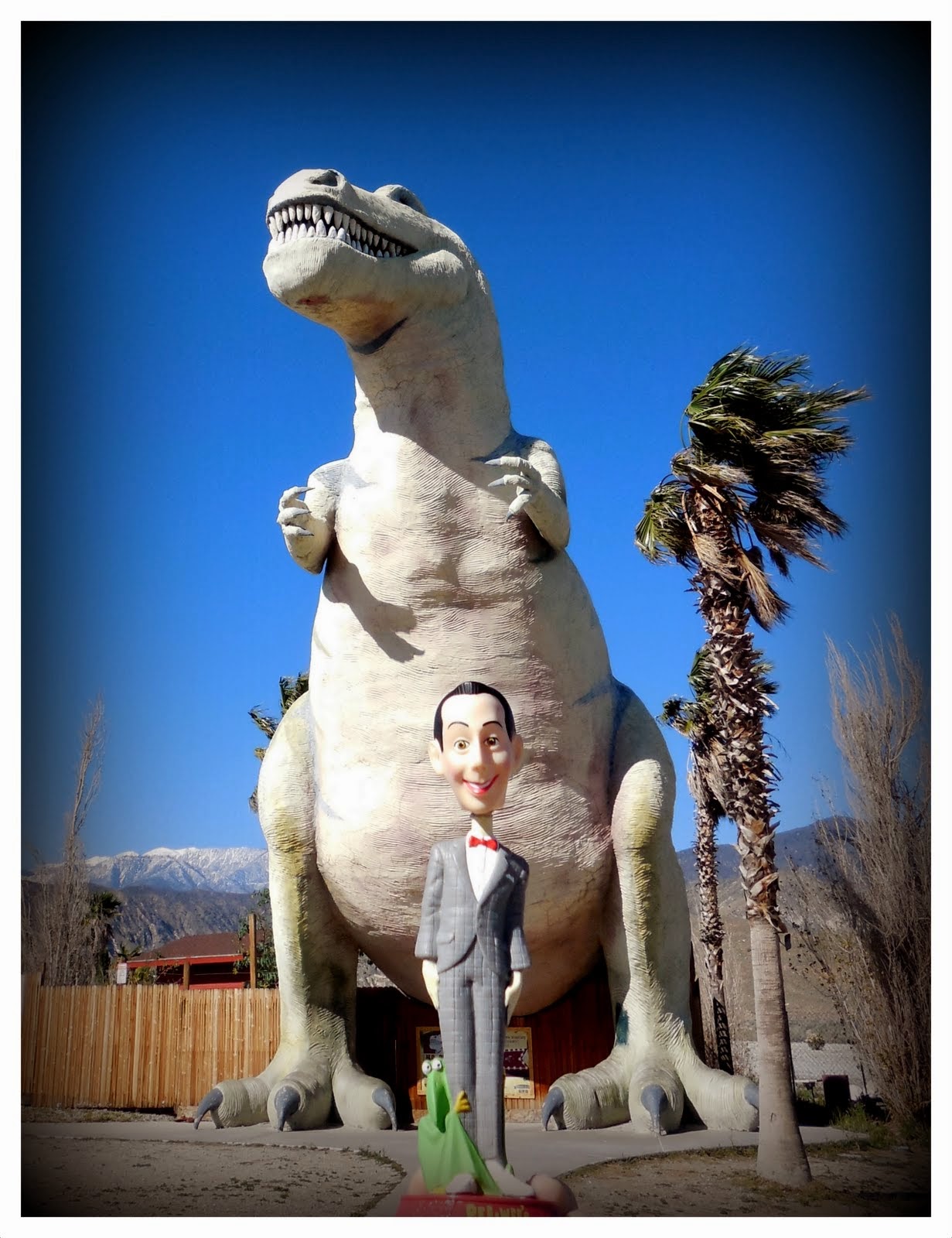 Well.. That old highway's a-calling.
I have two more stops to make!

Have a nice day!
Be sure to tell them...

...who doesn't know that today
is
Paul Reubens
Birthday
!!! 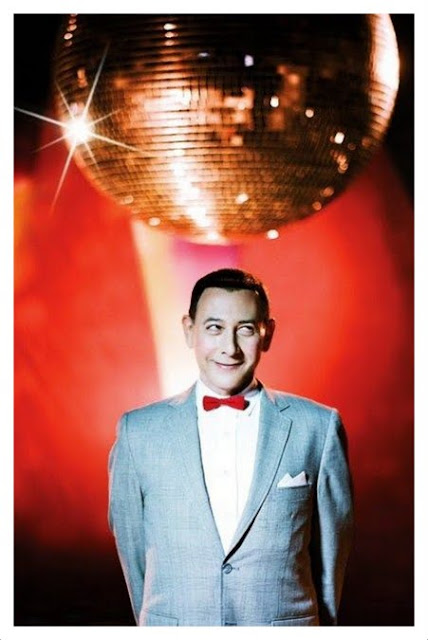 And then when we are finally ready for a snack, we are going to have some of these "Mr. Breakfast" cupcakes I made...but we'll wear x-ray vision glasses while we eat them! 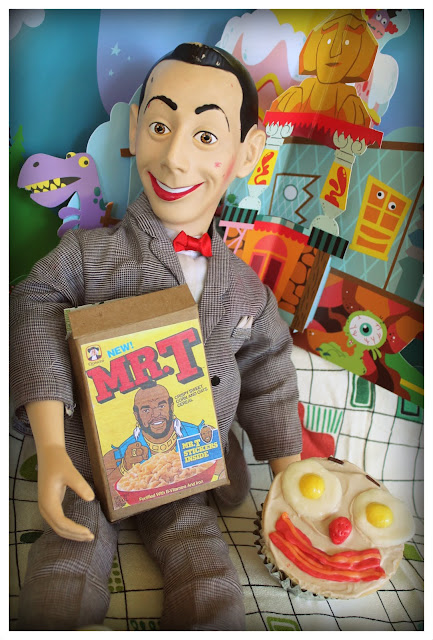 I love how the cupcakes turned out.  Well then, why don't I marry them?! 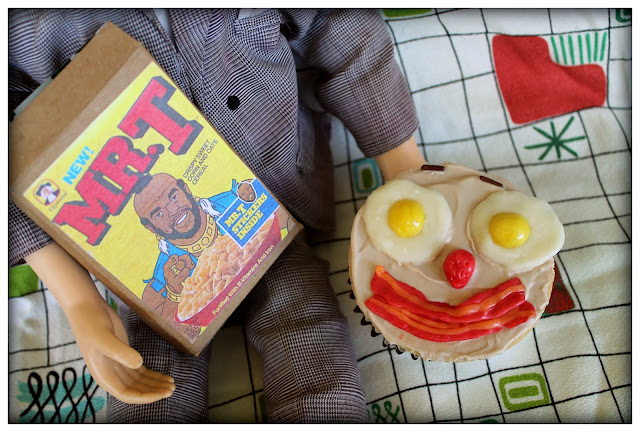 I made the (lightly toasted) pancake face from a frosted cookie.  Most of the other features: egg yolks, strawberry nose, and bacon mouth, I modeled from starburst candies!  The egg whites are white almond bark.
We don't have any Mr. T cereal laying around so we plan on dumping peanut butter Captain Crunch on 'Mr. Breakfast' instead.  But, of course, we will eat it with an oversized fork!

We hope Paul Reubens has a grand day and Jambi grants him a wish!
Meka Leka Hi Meka Hiney Ho! 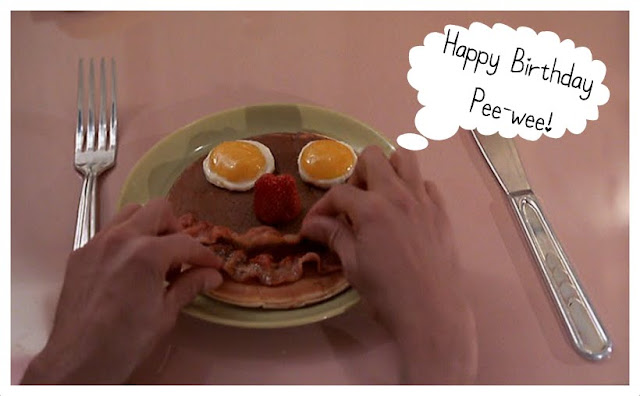