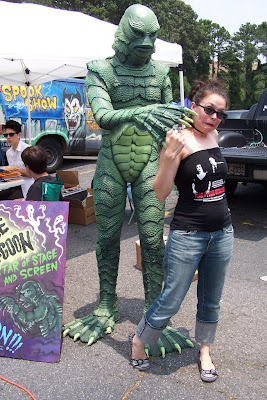 Also while in atlanta, heather and i went to the Rock and Roll Monster Bash. loved getting my picture with this guy (this could be why...).

first up, blastoff burlesque performed...i have big plans on making myself some of those bat pasties... 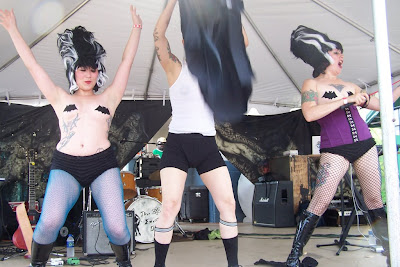 and the folks from Zombie Walk Atlanta were there doing free zombie makeovers...i should have taken advantage of it... 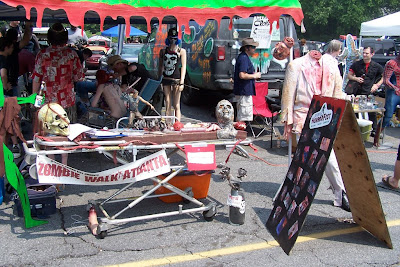 here's a person getting done up. i was so impressed with the amount of work these folks put into doing the makeup. along with giving someone that general zombie look, they airbrush the skin and apply all sorts of oozing lesions for the full effect. why again did i not do this? 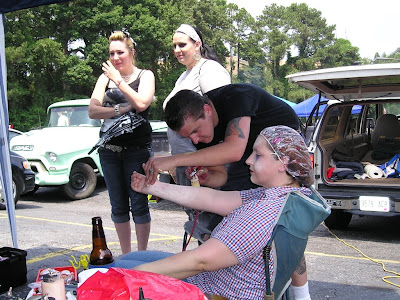 heather and i with a zombie dude. this guy was amazing...stayed in character the entire time and came to the event already looking like this...i don't think he gets out much. 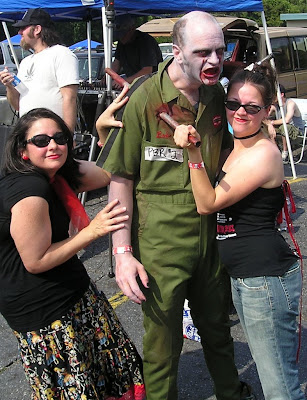 also at the fest was an array of artists and crafters with creepy wares. got to meet c. martin croker (involved in many ways with space ghost, but most importantly to me, he is the voice of zorac "I'm chartreuse").
other fun stuff to see and do includes but not limited to was a hearse show, a few decent bands, and my favorite all time activity, gawking at people.
Loads o' fun...waay better than drive invasion... hands down.
Posted by my house is cuter than yours at 8/30/2007 5 comments: 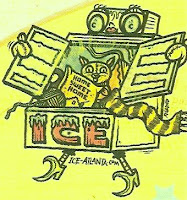 heather and i went on a mini vacation weekend to atlanta a few months back. the main reason was to go to ICE (Indie Craft Experience), an alternative craft fair. just now getting a chance to post about it. and because it's not as fresh in my mind as it could be, i don't have alot of details to share...sorry. i wish i could blame it on drugs and alcohol because that would at least be a fun reason but no... anyway, back to our story. below is a booth, who's booth? the hell if i know, but i liked it. 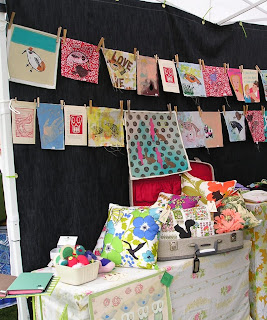 my dearest heather, trying to eat a crocheted pastry. the girl loves her cupcakes.... 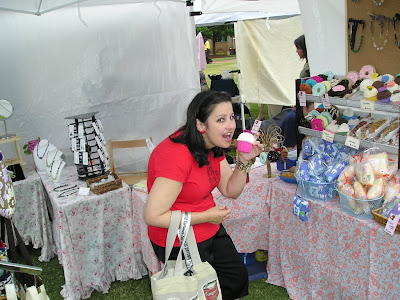 me, at the esty booth. along the bottom edge of the table were crafty offerings. i hope i didn't mess up the karma by picking up this...er, i'm not sure what it is but it's cute. maybe a food item of some sort, i think it's living in a bowl. 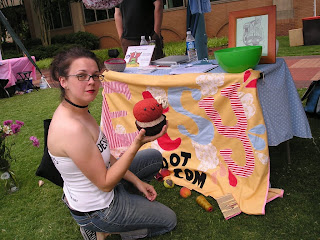 here are some girls that know how to pose for a picture the way i like, all over dramatic-ish..unfortunately, i don't recall their shop name or i would give some props. 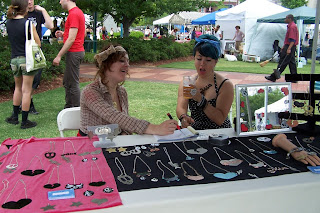 now meet the Geets... heather and i bought this little monster fam and toted them with us everywhere for little photo shots . the Geets got to go to IKEA and enjoy swedish meatballs among other "vacation in Atlanta" hotspots. they are seen here in the park in front of the world of Coke. they were just a few of many purchases we made. 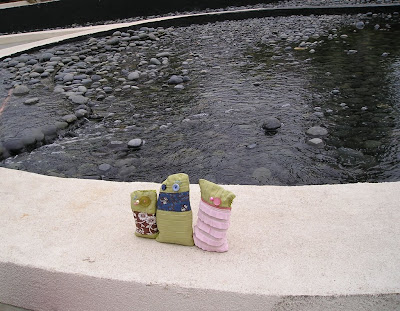 if my memory serves me right, it was a very cool craft fair, lots of neat stuff ...i highly recommend going...maybe one day the dixie dolls will be representing.
Posted by my house is cuter than yours at 8/27/2007 2 comments: 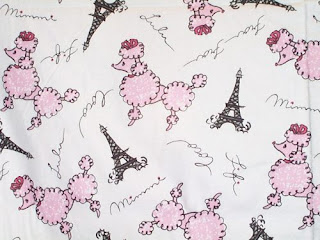 one of my dearest friends, dixie doll heather got herself knocked up just so we could throw this cool baby shower soiree! we knew she and her hubby were getting a little girl and since the nursery is done up in pink and black with french poodle decor, we decided to carry that idea into the shower theme. we did our best to hose the room down with anything pepto bismal colored ala steel magnolias and briefly entertained the idea of even painting the walls pink. above image is the fabric i bought as decor for the shower and then to make into a gift...notice in the script it says Coco (this is the baby's nickname!)

princess heather at her throne. we all dressed in pink and black. 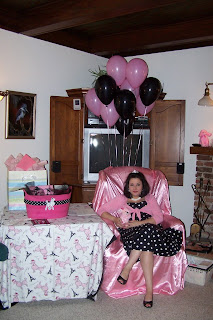 seen below is the hors d'oeuvres set up. the baby's nickname is spelled out in foam letters atop the table. the pink Eiffel towers are photo holders with ultrasound images along with french words and sayings relating to babies on them. heather's mom made the black/pink polka dotted table cloth. all the hor d'oeuvres were french inspired or within the color theme: croissant sandwiches, chocolate eclairs, strawberries and mini quiches. 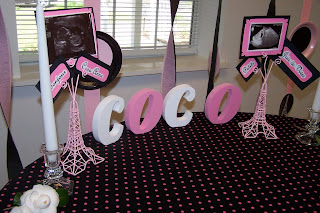 here is a cheap decoration i came up with using paper plates and streamers suspended from the ceiling. kinda snagged the idea in part from martha stewart magazine. 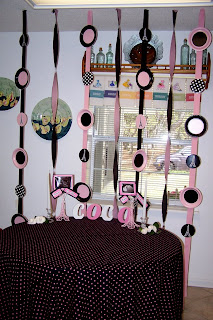 here's the beverage table. more pink and black! heather came up with the neatest idea. you see that thing hanging on the wall? well that is a framed print that was already there of something that just didn't go with our decor and we just couldn't have that! so heather covered it in black/white polka dotted paper and affixed the extra ultrasound photos and frenchie saying on it. genius, really. 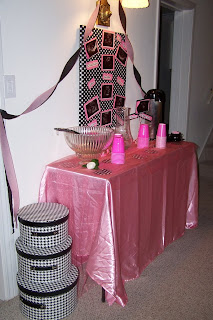 these, well, didn't quite turn out as i had hoped. they are pink tinted white chocolate little Eiffels. they are weeble woobles really...and not as pristine as i would have liked. not to mention these few took forever to make. 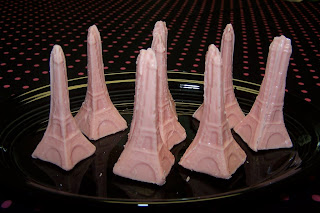 forgot to mention that it was heather's birthday as well as her shower! yay! here she is with her own little birthday cake i did up for her. notice the candles match the decor theme. the little crown was my birthday present to her. 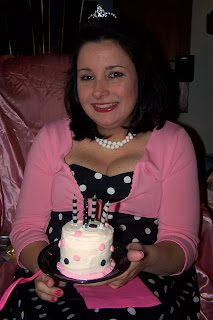 here are the "petite fours" i made for the rest of the guests. they are actually upside down cupcakes. 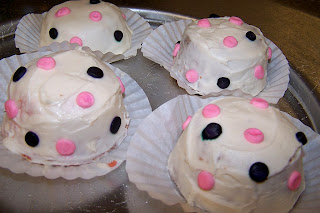 the hat boxes are from coco's nursery. we put the thank you gifts in and around them. 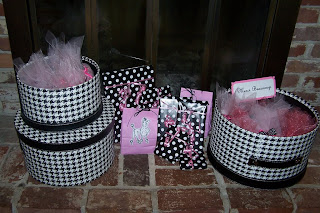 close up of the "merci beaucoup" parting gifts. 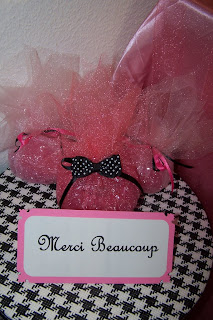 okay, now for some other details. it's going to get lengthy here on out so stick with me if possible....

:games:
i didn't want us to play the same old boring shower games. i was able after some time of searching online to find a few suggestions that weren't the same sad overdone ones. first was the string game. i'm sure it could have a much punchier title but i can't think of anything right now...maybe "how huge is the pregnant woman really?". in this game, all the guests cut a length of yarn that they think is the circumference of mommy's belly, the closest guess wins. the second game involved giving every guest a disposable diaper and a permanent marker. they are asked to write a funny saying (ex: loaded! it's daddy's turn! beware of fallout! poops, i did it again...) on the diaper so that when the parent's are changing said diaper at 3 in the morning it will give them something to laugh about, maybe... the winner is whichever one mommy thinks is the funniest. the third game takes some prep work but it is humorous along with being a bit disturbing, if you are into that kinda thing. take photos of the mother and father's face foward. cut out nose, eyes, hair, lips, ears ect. then find in a magazine a photo of a baby's face/body that will as close as possible work ratio-wise to the features cut from the parent's faces. pass out pre-made forms with facial features and some personal attributes are listed (eyes, nose, mouth, ears, hair, sense of humor, sense of style ect). mommy-to-be decides beforehand which of each features she would like for baby to have of her or daddy. the guests are asked to guess what they think mom will say, closest wins. for the visual part of the game put magnets or double-sided tape on the cut outs and place them over the mock baby face... it can become very creepy looking. to

:parting gifts:
example seen above with the merci beaucoup sign. to keep with a girly theme, the gifts were such things as pink lip gloss, pink nail polish, pink candles... you get the idea. the wrapping for them is pink netting on the outside with pink easter grass inside surrounding the gift then tied with matching ribbon.

whew, i hope i explained everything clearly, typing it all out was more exhausting than doing it...
Posted by my house is cuter than yours at 8/26/2007 13 comments: