Tie One On ~ Apron themed after a Musical 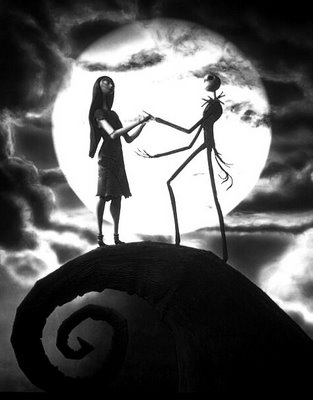 The current TOO theme is to make an apron inspired from a musical. And of course I take every single opportunity I can to do something spooky...and The Nightmare Before Christmas is a musical!!!! mawhahahahahaha!!!! 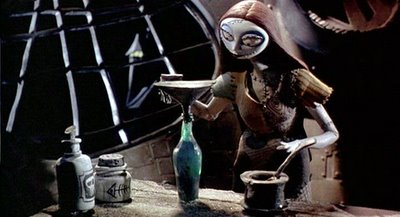 My apron is based on Sally's patchwork dress and even has a little pocket for collecting deadly nightshade. My new sewing machine has a special stitch function that is all about not being perfect and is all jagged on purpose...don't know what it would be used for in the real world of sewing but it was perfect for the look I was going for with this apron. I know it's hard to tell in the picture but those white things hanging down from my hair are the little black ribbons with skelly-head beads tied into my pig tails that came from miss amanda button!

Here are few more shots that don't really show off the apron much but are still suitable for framing (in my house at least)! Frank told me he didn't mind me sprawled out on his grave, if you were wondering, he actually enjoyed it.

okay, back to adventures in "Oh, Andy!" and watching out for loaded goats in the next post!
Posted by my house is cuter than yours at 7/31/2006 16 comments: Links to this post

Hello darlings! Welcome to the first of many posts regarding the vacation... My mom, pumpkinbutt and I went to Mount Airy, NC which is the town that Mayberry from the Andy Griffith show is based upon. She and I are big fans and have been dying to visit for years.

The first cool thing we discovered was The Derby Restaurant which dates to 1947. I LOVE finding quaint, oddball, local type places...and flipped when we just happened to drive past this place while we were exploring the town aka getting lost. The neatest thing to me is that this place isn't listed on the "tour guide". 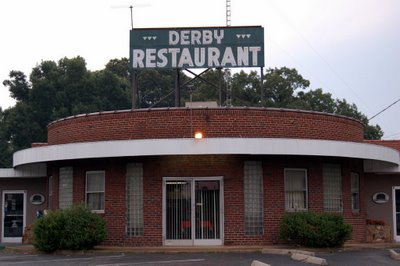 Here is a newspaper spread from when the Derby first opened. It was originally called the Derby Cottage and had a separate small building donning a derby hat out in the front that was a gas station and later became an ice cream stand, but has now been torn down. Click on the image to read about how the Derby was the newest, the most modernest, up-to-date eating establishment and it featured tomorrow's lighting!!! 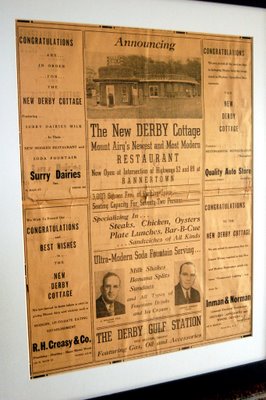 The Derby serves yummy greasy southern food for cheap and they load you up with it! I absolutely recommend stopping in if you are in the neighborhood. I don't have the phone number or address but the town is small...ask someone, anyone that lives there and I'm sure they will directly direct you in the right direction.

Now....For the most exciting thing ever!!!!! I am an absolute freak over old fortune telling type things and I LOVE these wate/fate deals!!!!!! I actually found one for sale once and was dying to purchase it, only it was $500...damn. This one at the Derby is the coolest though! It still worked and was only 1 cent! 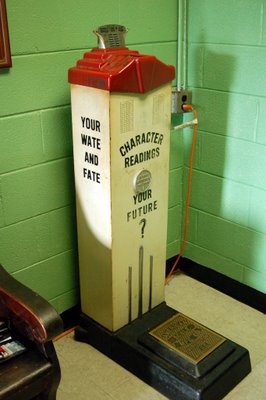 Now, here is my dilemma... I have an awful memory so I took a picture of the fortune. Well, I then discovered that the picture is not completely legible...Click on the image for a larger look-see and tell me if you can make it out.. At this point I don't care if it's just an educated guess! In part it says "Don't expect miracles but _____k fact(s?) ____. " 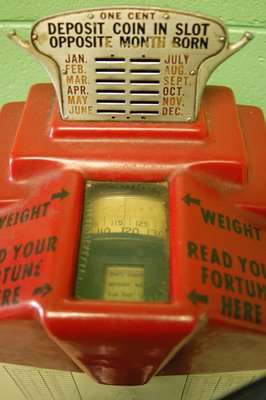 It's driving me crazy that I can't figure this out....
I had a picture of me standing on here but I looked like Dorkus McClod so I decided to not embarrass myself by including it.

Stay tuned! More installments to follow!
Posted by my house is cuter than yours at 7/30/2006 8 comments: Links to this post

I'm a bad, awful, terrible daughter... I just got these very belated gifts for my mom for mother's day and her birthday to her. I could throw out a bunch of excuses right now but let's just get to the goods instead!
First off is something I made: 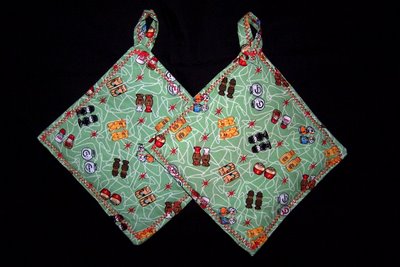 These are pot holders I made from the fabric Jenn sent awhile back. It is a Michael Miller fabric with retro style s & p shakers on it (click on image to enlarge it). The woman-my mom, needed some good pot holders... All she had were these wimpy paper thin ones that you had to use 3 of them together and that still was living on the edge of third degree burns. I made these nice and thick but admitly didn't try them out because I didn't want to get them dirty! Hopefully I haven't set my mom up with a disaster! 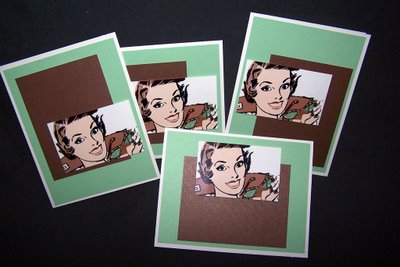 They are handmade cards by Mary Ann. Aren't they cute? It was hard to not keep them for myself! I love how each card is a little bit different but the same... very clever!

Okay, for starters, when I saw the recipe (see post below) from Amanda for Pink Coconut Frost I thought it was for a frosting and considered just eating it straight from the bowl...well, if I would have turned the card over I would have realized that IT IS A DRINK!!! However, I thought the idea of it being a frosting would still kick ass so yesterday I rocked out in the kitchen to The Raveonettes while wearing my cool new apron and making up a batch of pink coconut frost and frosting! 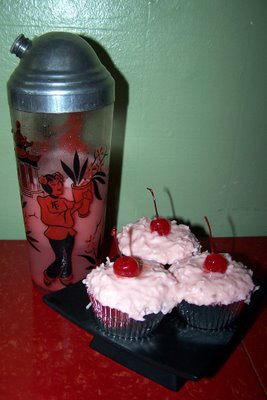 combine all in a blender til slushy, garnish with cherries.

I took the above recipe and just adapted it abit.
Only I didn't use or write down measurements so do
what you have to with this:
powdered pink lemonade mix
vanilla vodka
marachino cherry juice
shredded coconut
cream of coconut
pre-fab cream cheese icing

Mix the above in what ever measurements you please. If the icing seems too liquidy put in the freezer and it'll firm up.

The Pink coconut frost/ing were both very good! I have to say though I took liberties with the cream of coconut and added waaay more than 3 tbsp. for the drink. I am just freaky over coconut.

I don't have a blender but I do have an "Ice-o-Matic" ice crusher, I just thought I would share it with you all. Yes, it's a hideous shade of avocado green but it's got an awesome form and works really well! 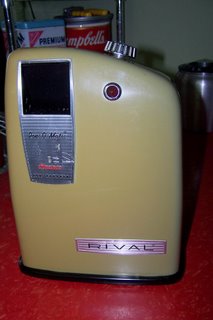 It's pretty bad when you are late for your own party but it just couldn't be helped!

Here are the goods I got from the lovely and talented Amanda...I am soo thrilled !!!! She totally GOT me...which I have to say is hard. I was feeling bad for whoever pulled my name because I am not the easiest person to make for. (Click on all images for a larger view) 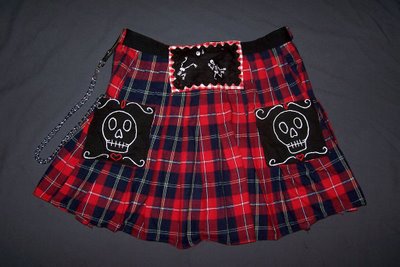 Isn't this a cute apron! I'm telling you I am going to be wearing this apron out on the town! It's not going to stay hidden away in my kitchen! On the pockets are skelly heads that are embroidered and lined in red gingham. I love details like that! And check out my chain! 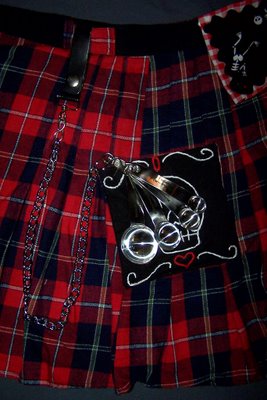 It's got measuring spoons on it!!!! Such an awesome clever idea! 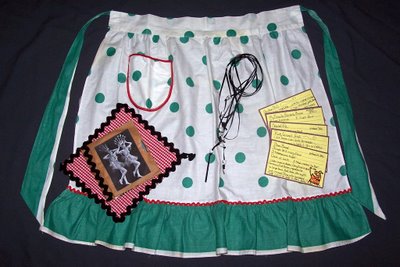 She sent some extra goodies as well...like a matching pot holder in red gingham and black skeleton fabric (seen on the left). The recipe cards are on the right and have the cutest little monster on them holding a speared food product saying "I cook!"....love them! One of the recipes is for Pink COCONUT frosting....and it calls for gin or vodka! Forget frosting the cake! Let's just eat it right out of the bowl! In the middle of the photo are the little ribbons that were tied around the packages...so dang cute! They are black ribbon with skelly head beads.. I see these becoming hair adornments for my pig tails! On the left, on top of the pot holder is a nifty CD holder along with 4 very cool CDs (more on that below). Then in the background is a vintage cutesy apron....did I rack up or what?

Here is a close up of the front of the CD case she made. First off what I love about this little organizer is that it is scrap craft (made from a brown paper bag!!!) soooo clever! Amanda, you should do a tute on this baby! At first glance the image on the front is cute... two vintage pinup chics.. but there's more going on! These chics are wearing saran wrap dresses and have cooking utensil headgear (a pot and spoons)! That is soo bad ass! 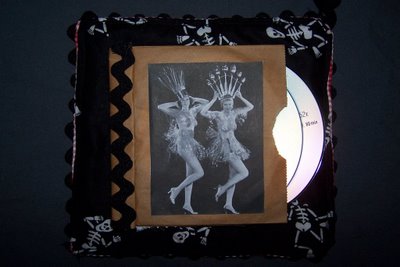 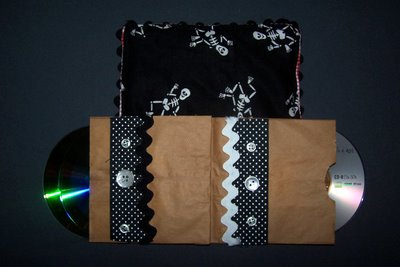 Here is the inside of the CD case... cute details! lovin' them! the CDs are bad ass too! Stuff I had never heard about before... The Raveonettes and some old timey 20's, 30's, 40's comps with songs alluding to sex and dope! Too cool!

I got Mary Ann for my guest! Lucky for me she and I have similar interests so she was pretty easy to make for. I made the apron design up myself and included a matching head band seen to the right. 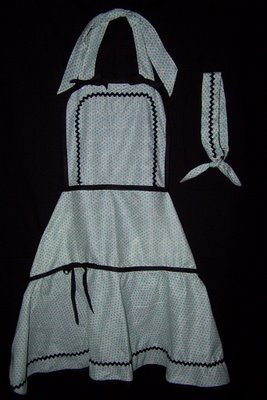 I also made a matching recipe card holder book(below, on the left). The recipe cards are on the right..I still owe her an extra recipe because of computer issues. 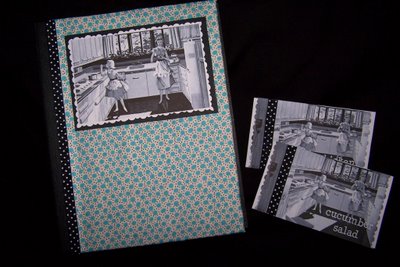 What's Cookin' first round done! Hope everyone had a fun time!
Posted by my house is cuter than yours at 7/20/2006 14 comments: Links to this post