Have a Nice (Birth)Day!! 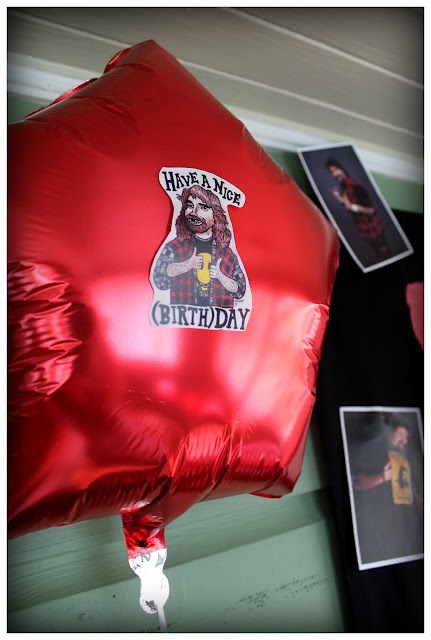 For PB's birthday party this year I decided to go with a Mick Foley hardcore theme!
For those of you who don't know who Mrs. Foley's baby boy is, he is the Hardcore Legend of WWE wrestling. 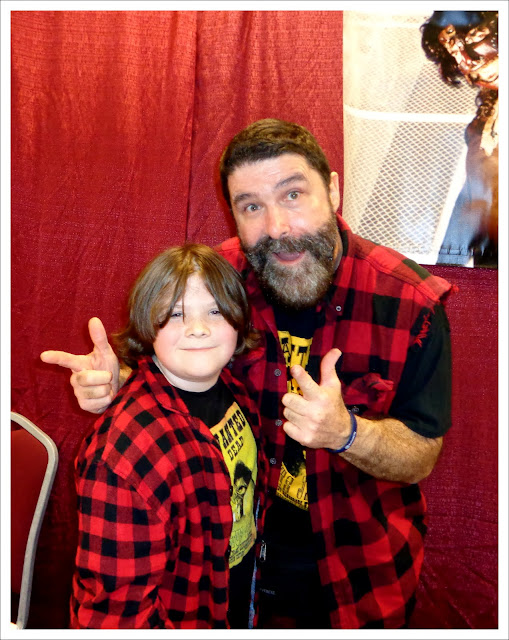 PB got to meet his favorite celebrity at a recent Comic Con, along with getting his autograph, a photo with him and attended his panel talk.  Look! They were matchers! 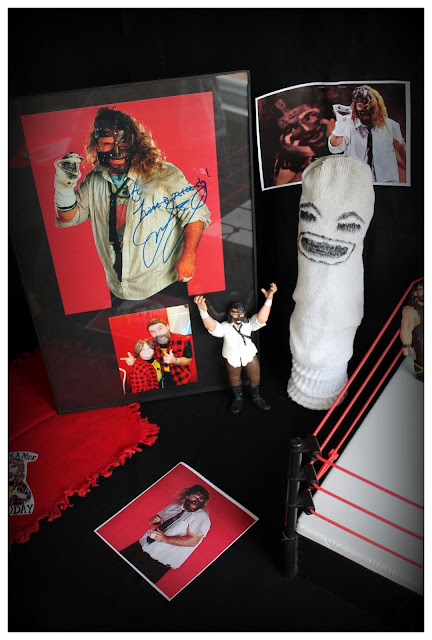 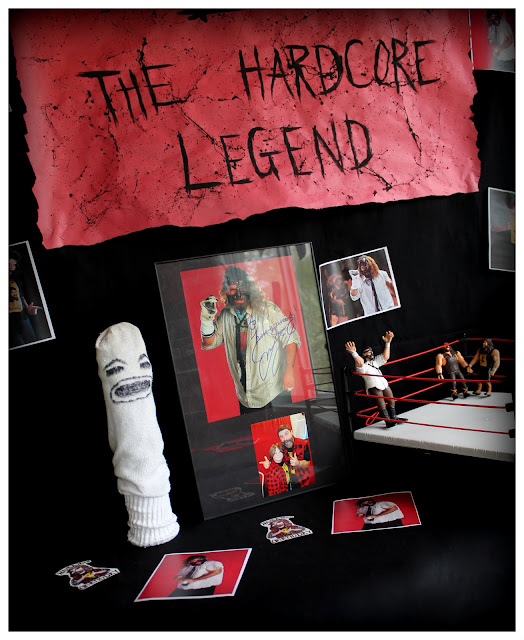 I decorated with PB's wrestling ring, his 'three faces of Foley' action figures and publicity photos.  We also had PB's autographed photo framed for him. 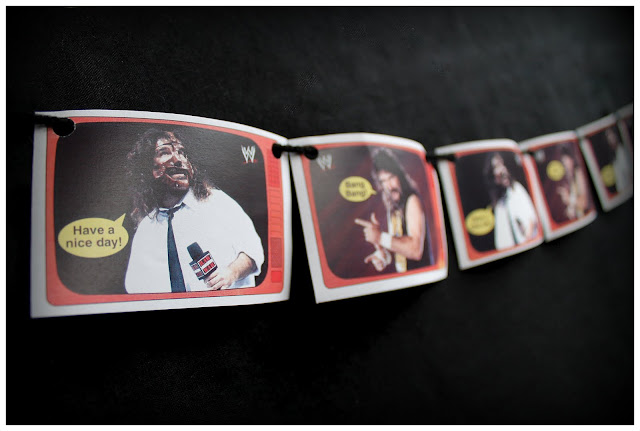 I made a couple of buntings with Mick Foley trading card images. 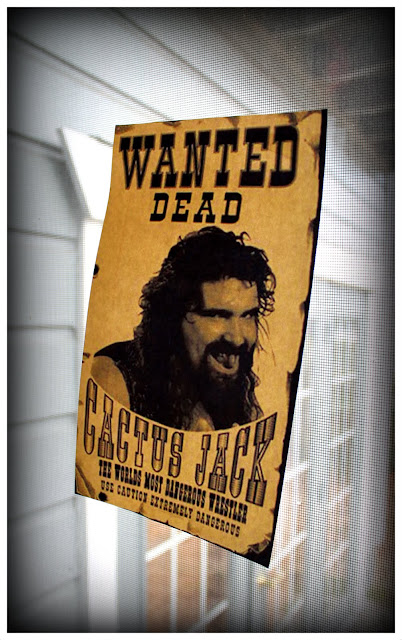 And had to put up a bunch of Cactus Jack Wanted posters. 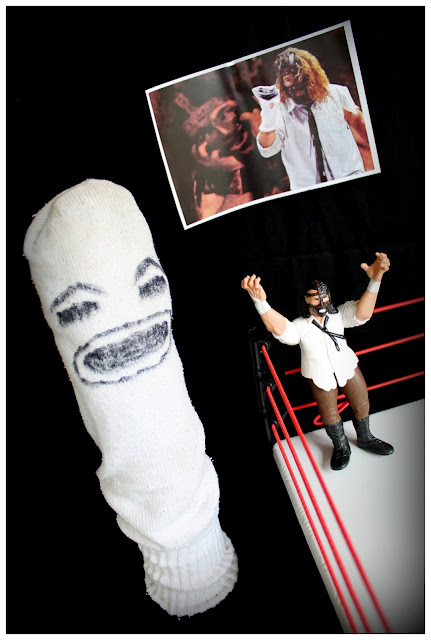 I made several Mr. Socko puppets, Mankind's side kick, which happens to be an old dirty sock.  I had lots of perfect dingy holey socks in my rag bag courteous of Mr. Husband to decorate with.  To make them stand I inserted several balled up plastic grocery bags in the toe area and slipped it over one of those tall glass Mexican religious candle holder deals. 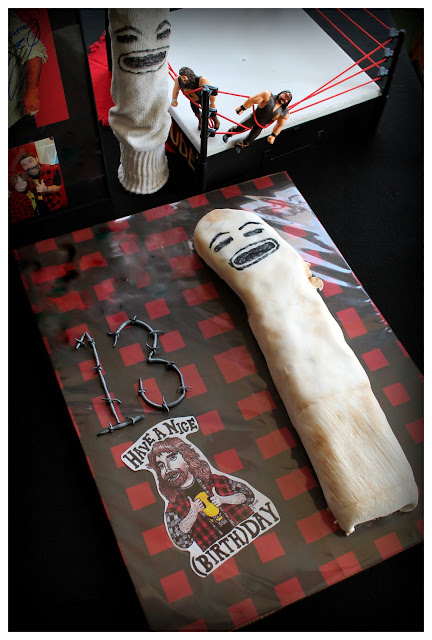 Mr. Socko's likeness was also the inspiration for the birthday cake.
I covered the cake in white fondant that I brushed cocoa powder on to make it look roughed up. I also torn a hole in the heel. 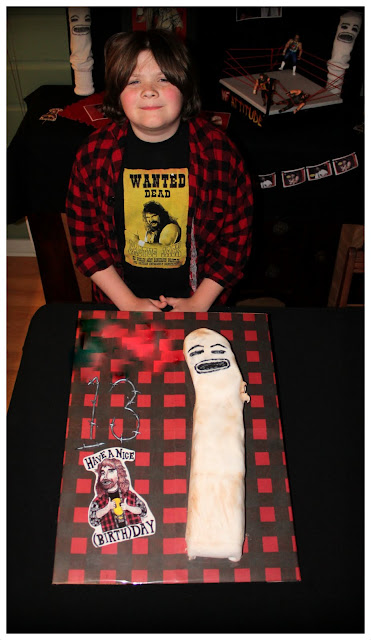 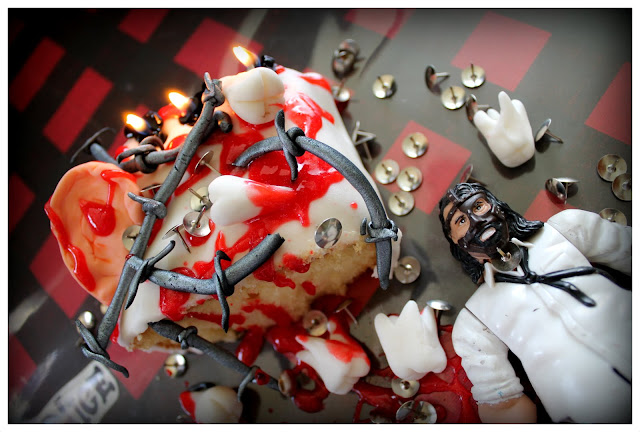 To have a piece of the cake you have to be Foley Hardcore though!  It is covered in some of his infamous items (some real, some not!) from his matches:  Barbwire, a ripped ear, broken teeth, blood, fire, and lots of tacks!

Need a little more wrasslin'?
Check out this past post:
Lunch Time Ring Side
Posted by my house is cuter than yours at 5/29/2017 No comments: 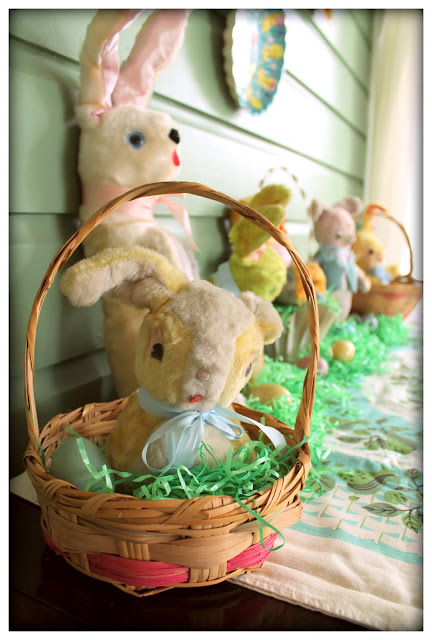 You read that right.  It says EASTER decor.  Easter is one of my least favorite holidays.  I am not into froo froo flowers and pukey pastel colors.  I like things a bit distressed, old, and with character.  How can a Halloween kid represent this happy fluffy holiday in their own way?  It then came to me when I was arranging my vintage stuffed animal collection that most of the fellas I had were bunnies, a chic, along with several other deteriorated darlings that once upon a time were probably nestled in someone's Easter basket.  I then realized I had Easter decor and didn't even know it! 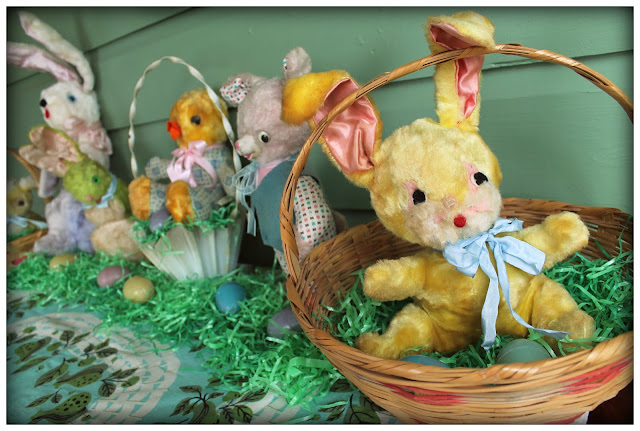 So I rounded up these cotton tailed cuties along with the other minimal vintage Easter items I have and set up a bit of decor in the dining room.   Everyone did get a bit dress up with a new fresh flouncy bow. 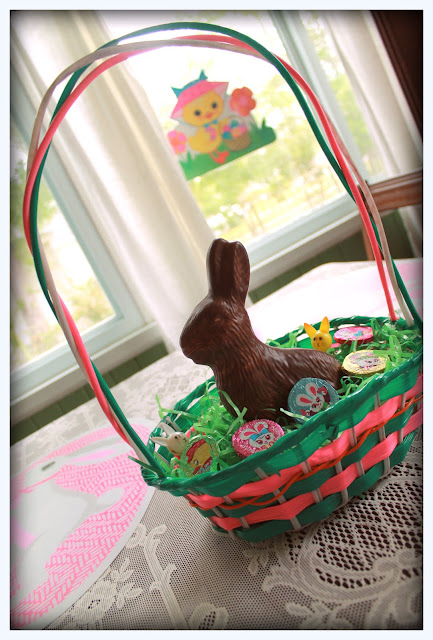 The table centerpiece is kinda halloween evil in a way.  None of the candy is real in the basket.
The chocolate bunny is ceramic and the little foil wrapped "Bunny Money" chocolate coins are just for show.  I like to collect packaging with graphics that have remained unchanged over many decades.  Russell Stover and Palmer are two companies havng these kind of illustrations for Easter.  I saved these foil wrappers several years ago and replaced the candy with cut out disks of foam core.  PB was not pleased with any of this nonsense.

Here are some individual mugshots of my enervated eggheads: 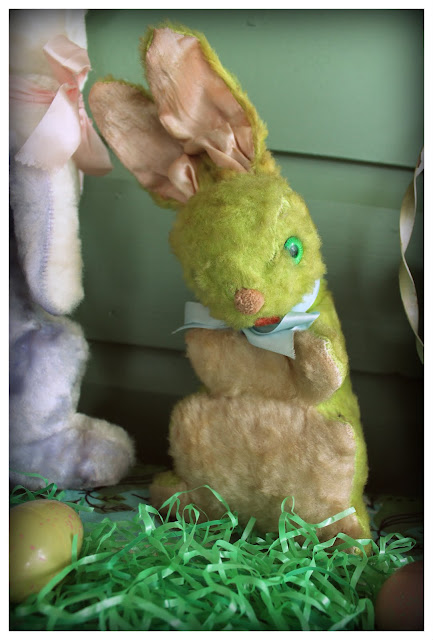 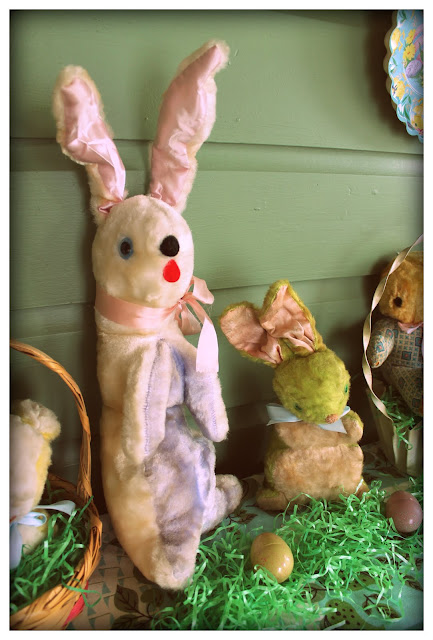 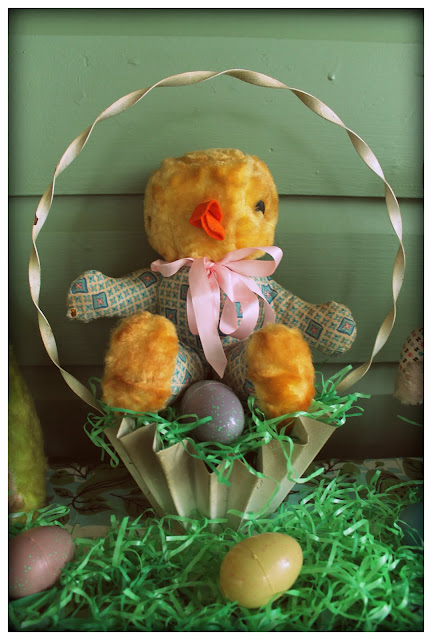 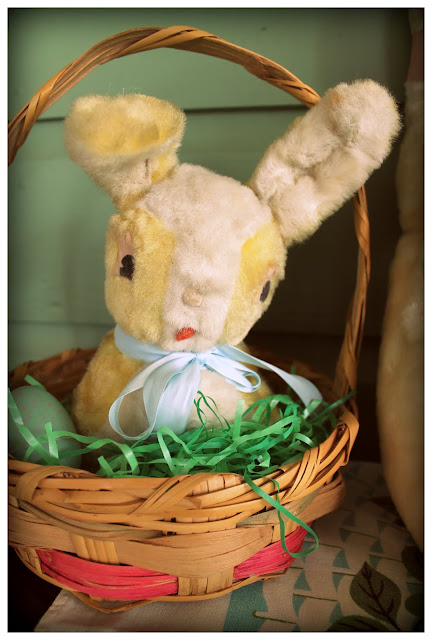 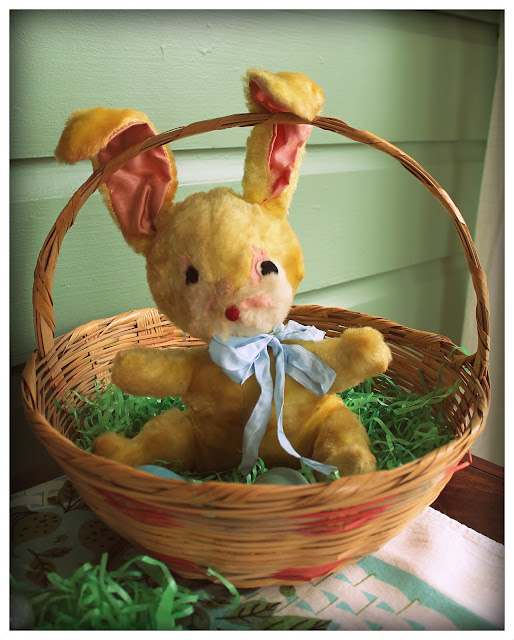 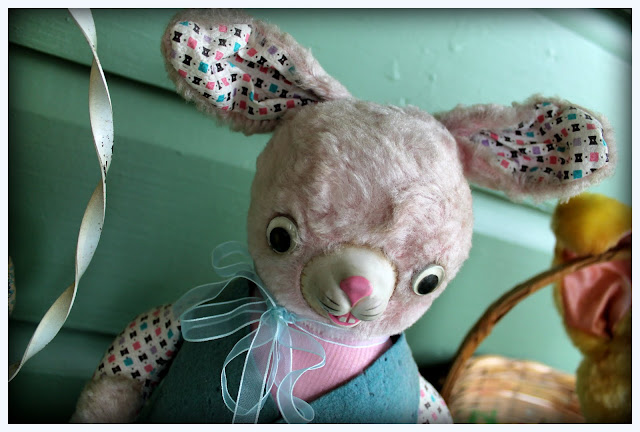 Easter Egg Past Posts Hunt:
Delicious Glamour Easter Egg Cake
Easter Droppings
A Peepin' Easter Craft
Posted by my house is cuter than yours at 5/22/2017 No comments: 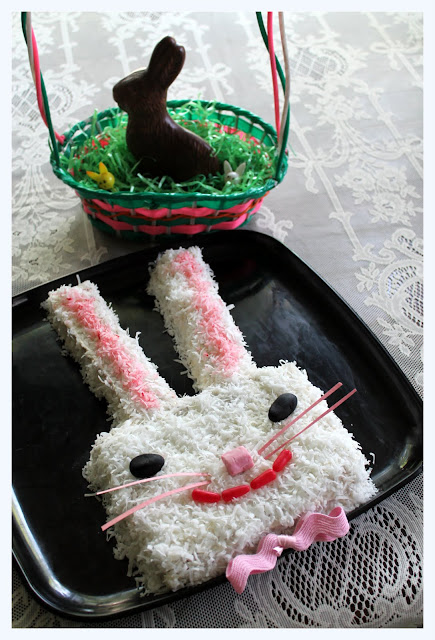 My Easter involvement is usually pretty minimal.  Yet this year I actually acknowledged the holiday with more than an a Target bag filled with discount cheap candy.  I have two whole new posts to share this year on said subject!

Most years we do manage to make a bunny cake because of coconut....love coconut! The cake is generally one with a plastic bunny face stuck to a couple of half circle cakes loaded down with coconut fur.  The Easter bunny does drop off goodies to PB every year along with "pooping" out PB's name next to his filled basket.  The Easter bunny poops candy like chocolate malt balls and chocolate covered peanuts or raisins.  You knew that right?


This year we retired the plastic bunny face and tried a whole new design of cake.  This boxy bunny is too too cute!

image source
{Click on above image to enlarge for instructions}

We don't care too much for jelly beans so I improvised his facial features with stuff we already had, some edible and some not.  Eater beware.  His eyes are black fondant, nose is a rock hard piece of bubble gum, smile is Hot Tamales.  His whiskers are strips of construction paper and his bow tie is scrap fabric. 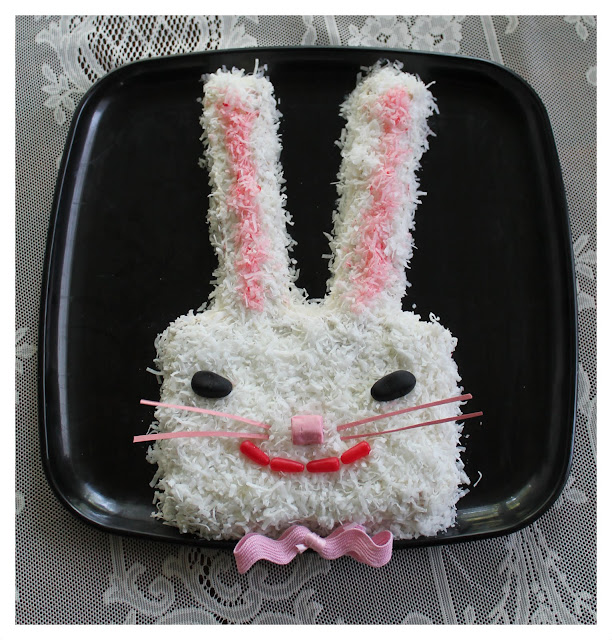 Here are the few minimal, yet super cute, posts links I have to some past Easter stuff:
Easter Rewind
A Peepin' Easter Craft 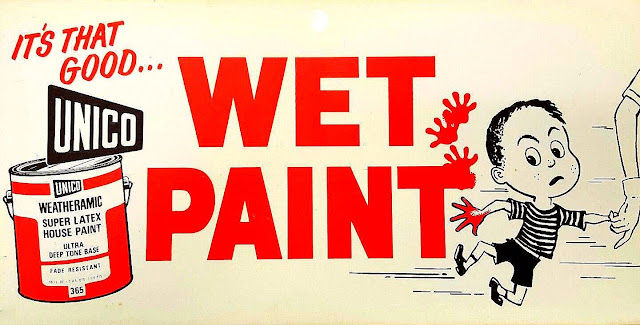 I thought by May I would have most of my house projects under control to where I would be back to this "house" but it's going to be a bit longer.  I am about to embark upon the most difficult space, the dreaded first room people see and judge you by: the living room.

I have made some massive progress in other areas of the house over the last few months though.  Because I like to make lists here is a very simplified one of my project breakdowns:

Dining Room:
Those crappy plastic broken mini blinds that have been hanging in the dining room for the past 6 years are now clogging up the landfill.  Curtain rods are up, curtains made, walls painted, and (after years of being stored away) wall hanging are up too.

Kitchen:
The walls and ceiling are painted, most wall decor is up.

Yard:
Lots of massive weeding has been going on and currently still in progress.  Mr. Husband Sir and I are also working on landscaping ideas.

This whole house decorating project has been a huge deal.  Picking wall colors is difficult because there are so many things that have to be considered.  The color of the living room and the dining room have to work together since they are only separated by a mini half wall along with needing to individually work with the furniture and other decorative items in each room.  But the biggest thing to consider with color is that the choices have to work with Halloween and Christmas decorating since those are both encompassing projects alone.  Another large project within the decorating is locating all the items I have to consider to use in each room.  I have been gathering little thrift store treasures for decades and stashing them in all sorts of places.  I would love to be able to give everything a little space to shine.  And if there are items that aren't going to work with the over all scheme then pass them along.  PB and I are planning on decorating/cleaning out his room this summer and also working toward a big yard sale for September.

I know some folks like to think of their house decorating as never done and always evolving.  This is waaay too much work.  I don't like filling my walls with nail holes or repainting them a new color on a whim.  I just want it all done once with nothing left but the dusting.

I have been keeping my focus on this so much that the fam and I haven't been celebrating "holidays" like we normally would do.  Holidays like National Potato week have gone by without a single potato chip in site.  The first week of May was a tough one for me.  Elvis and Pricilla's 50th wedding anny, Star Wars May the Fourth day, and Cinco de Mayo.  All missed. But it has to be that way.  If I start working on ideas and projects for all of my holidays I won't even think about picking back up a paint roller.  The good news is that some holidays, like birthdays, will never be missed.  I do have several posts I am pulling together that are from festivities that have gone down the past months and I will post soon.  Once I get this house decorating tamed I plan on taking loads of pictures to share here.

As an ode to the holidays I missed this year here are some past posts that will have to represent for now:

Star Wars "May The Fourth" Day:
Han Solo in Jellonite
Wampa Doughnuts
Wookie Cookie Hairballs
Death Star Cookie
Posted by my house is cuter than yours at 5/08/2017 2 comments: