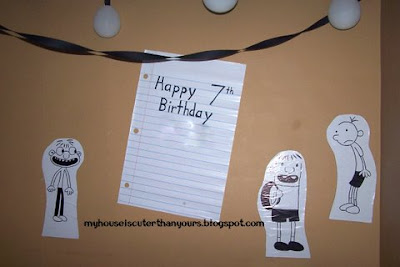 My "wimpy" kid turned 7 years old last month! Every year Pumpkinbutt has a themed party...Saying "party" is really putting it lightly. He has a full-all-out-mega-hullabaloo-birthday-athon. I don't generally post about them because after the ordeal i have to go into rehab to be cured off the Wild Turkey. Last year's partypalooza still haunts me....Star Wars. good god almighty. i may write about it at some point because i feel certain i must have been nuts. i am sure to receive a discount coupon for the local crazy house which will come in handy one day. after my mind cleared i vowed that this years party was going to be simple. simple enough that i can post about it and it not drive me to drinking when i relive the experience. i am motivated to post about this party particularly because there isn't alot out there on said theme of Diary of a Wimpy Kid (plenty out there on star wars!) and it may be helpful to someone. i have snagged my share of party ideas so this is my contribution toward party idea karma. i don't have photos of all the happenings and items so unfortunately some of it will have to be just read and left to the imagination...


Ok let's get this party started:


starting with the photo above, i got a roll of white wrapping paper from $tree and made it look like a large piece of paper using markers, a ruler and a circle cutter. At the bottom of the paper i left space for the guests to sign well wishes. the enlarged peoples (Greg, Rowley, Fregley) on the wall are on the same type wrapping paper. The balloons, streamers and partyware were black and white (like ink and paper). as the guests arrived we played Beastie Boys Intergalactic, referencing the first movie where it was played at the mother and son dance. Also to buy time while the guests arrived they each got to "Wimp Yourself". These were then printed out and hung on the wall for all to admire. 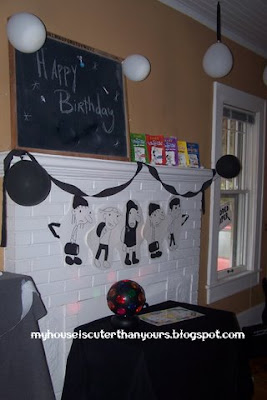 many of the decorations were also the props for the games. very handy! In the book/movie Greg and Rowley become members of the school's Safety Patrol and have to help the kindergartens cross the street . hanging on the mantle are "the kindergartens" made from poster board and individually attached with velcro with a nylon handle on the ends. for the game, the kids wore safety vests and had to "hold the kindergartners hands" (nylon handles) and get them down the drive way without them disconnecting. sounds fairly easy....but not when the mean teenagers are chasing them (like in the book/movie)! i borrowed a remote control truck and placed photocopied images of the mean teenagers in the windows of the truck. the kids were awarded with packets of hot cocoa referencing the book where that is the perk of being a safety patroler. also seen in this image, on the mantle top were all the books with little battery powered tea lights lit. the disco light ball was another reference to the mother and son dance. 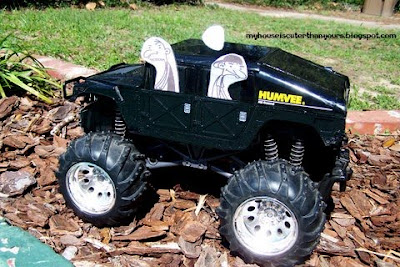 i liked how it appears the illustrations are driving. in the book they were actually standing and bulling Greg and Rowley. 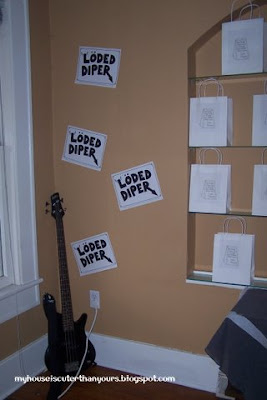 another game yet also decor. The Loded Diper band stage corner. Loded diper (pronounced Loaded Diaper) is Greg's older brother, Roderick's band. For this game the kid's got to play the guitar loudly and badly while everyone cheered them on, took pictures, and requested autographs. now that i have seen the second movie another layer to this game could be to dance like Greg's mom during the performance! the bags on the shelf to the right, are the loot bags but again used them as decor until needed. in one of the books Roderick makes Greg's school lunch because his mom wasn't able to. so Roderick puts a note on the bag as mom would but saying something Roderick-ish. "Dear Greg, Remember to change your diaper after lunch. love mommy". ha! love it! 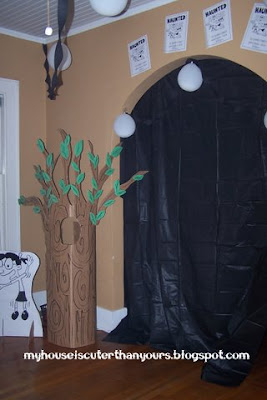 Another corner of the main party room has a cardboard tree and a free standing cardboard cut out of a little girl used for the next game. This game references in the book/movie an awful little girl named Patty Farrell and while on stage performing in Wizard of Oz, Greg (playing a tree) pelts her with apples! For this game the kids got to wear the tree and throw fake apples at the card board cut out of Patty with the intention of knocking it over. The kids loved this game so much they all went 3-4 times each. Even some of the adults put the tree on and knocked her out.

we also played two other games that required very little items and the parents participated as well. first, the cheese touch game which was like hot potato only they passed around a piece of real cheese inside a ziplock bag. the other was called the Shame Game which i found in a press packet online for a Wimpy Kid book release party. everyone stands up and as i called out situations if they are true they continued to stand, if false sit down. for example... Have you ever picked your nose in public and didn't get caught? of course you have so keep standing! the game continues until the last one standing, the most shameful one, wins. so back to the photo above. to the right is the entrance to the Haunted House! (i hung up a couple of black tableclothes from the ceiling to conceal it until needed.) In one book, Greg and Rowley decide to make some money by hosting a haunted house complete with live sharks. but only wind up finishing the hall of screams area where the kids basically crawl under a table while Greg and Rowley howl and scream next to it.... so wah-la! i put the dining room table next to the opening and made noises as each kid crawled through. 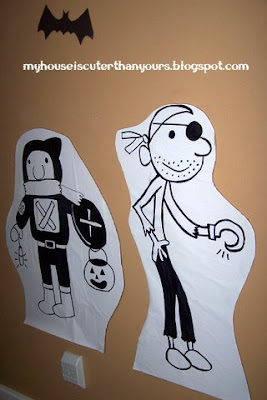 on the other side i decorated the room with halloween stuff since it is a big part of the story in the books/movie. on the wall were cutouts of Greg and Rowley in their halloween costumes. 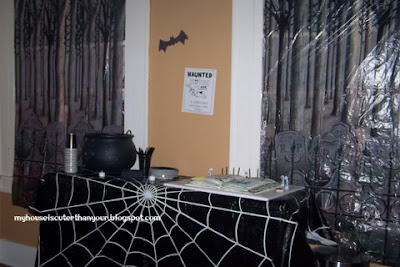 and because i have plenty of halloween stuff this worked out well for me. i hung up copies of the Haunted House flyer that Greg had made on the walls along with bats cut from construction paper (already had on hand). 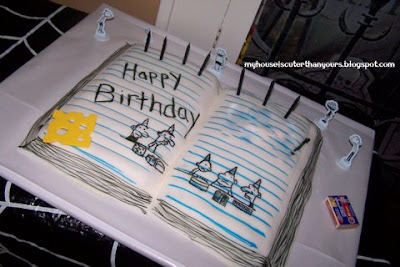 for the cake i made a simple sheet cake covered in fondant to look like an open book. i wrote on it with food markers. that top right hand corner wasn't truly smudged, PB's name was there. 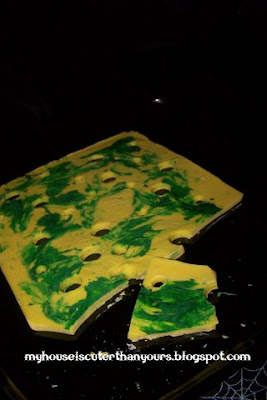 for the snacks, i just went with premade easy junk food...pizza rolls, chips, candy...it's what Greg would have liked! i did make a large piece of the moldy cheese out of white chocolate and food dyes. i cut the circles out using the ends of a sterile syringe casing. 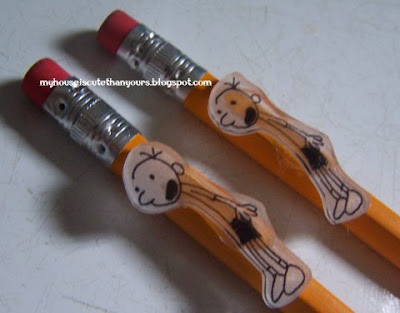 for the loot bag prizes i embellished pencils with shrinky dink Gregs. i made some Diary of a Wimpy Kid Do It Yourself type pages printed on lined paper and complied them into journals for the kids to complete at home. also with the loot bags was a copy of the "Wimp Yourself" that each kid made and the hot cocoa.

this was the cheapest party i have ever done. i may have spent 35 bucks for decor, goodies and food. i made several things out of a free refrigerator cardboard box. I had alot of stuff already on hand. the parents had just as much fun as the kids.


Oh! for the thank yous i used the form Greg had for his christmas gift thank yous .... 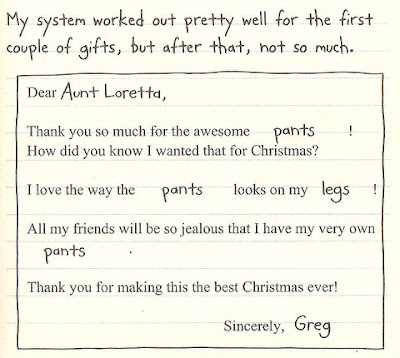 but changed it to birthday: 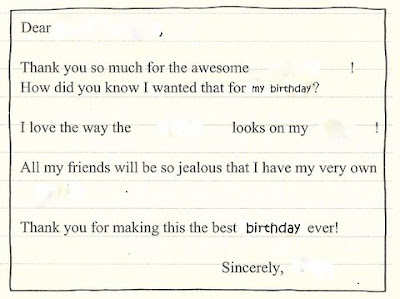 i also made a Diary of a Wimpy Kid shirt for PB to wear so he would be dressed themely (not a word but works!).

and here is the boy smiling and enjoying his party! unlike last year where he put on a luchador mask, hid and cried. ah good times! 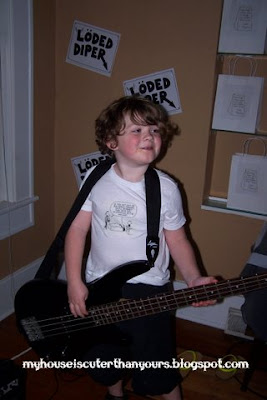 This is super adorable...my littlest just turned 8...and she has never been into the home-made BASHES that I threw for her almost 15 (EEK!!)year old sister.
Ah...yes the days of that 70's party...project birthday runway...harujuku,rockin'Tokyo bash!!

It truly takes me back from the music...to the art work...PB is so lucky!!

Could you tell me where you got the full body images for the characters? I tried the wimpyourself link but it doesn't work for some reason and the party I am doing is on Monday. Your party was so cute!