For dessert this weekend I decided to try something strange and unusual, something that we only hear of ordering at fine restaurants, something that urban legends are made of.....Baked Alaska! For those of you who do not know what I am talking about, it is a dessert that involves putting ice cream in a 500 degree oven and it doesn't melt! Yes you read correctly! Doesn't melt! The secret is in completely sealing the cake and ice cream in meringue.
I got the recipe out of my Betty Crocker's New Picture Cook Book from the fifties ( I can't find the exact date due to the fact that the first few pages are missing). It wasn't too complicated to do, just had to really plan those last few moments before you put it in the oven.

So as it was coming out of the oven I gathered the victims around it like it was a side show attraction! 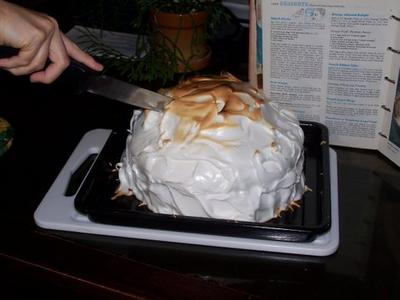 Ohh and Ahh at it's frozen center that defies reality! 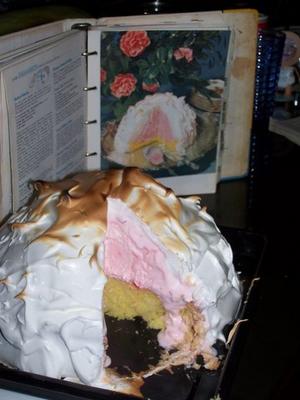 It did have a little bit of melting as you can see from the photo but that all happened after it came out of the oven and while I was trying to take the perfect photo! Even the one shown in the cookbook had some slight melting. So how did it taste? Like cake and ice cream with meringue. I wasn't too impressed but the fam went ape over it! Go figure!
I have noticed that this blog is really being overcome by my adventures in unusual desserts! I promise some more crafty stuff soon. I have something in the works right now that doesn't involve any measuring cups so stay tuned!
Posted by my house is cuter than yours at 7/26/2005

As soon as I saw this dessert, I recognized the recipe. I make the Pineapple Upside-down Cake on page 233 every year for my husband's birthday. I can scan the first page of the cookbook. Let me know if you would like to have it. The copyright on mine is 1961.