Part II of the One Party To Rule Them All!

The hobbitses journeyed through Middle Earth next.

They crossed the tricksy dead marshes... 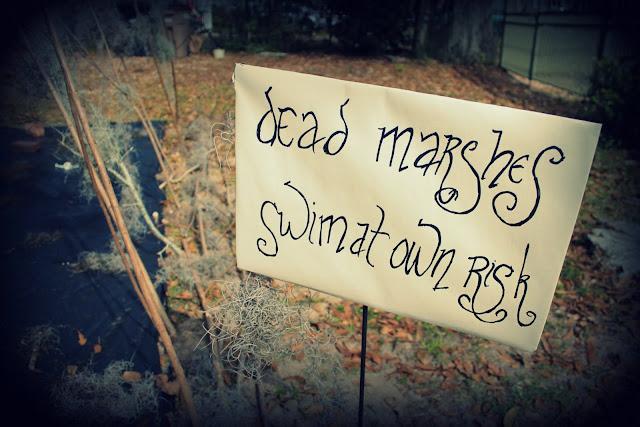 "I found it, I did.  A way through the marshes. Orcs don't use it.  Orcs don't know it.  They go round for miles and miles." 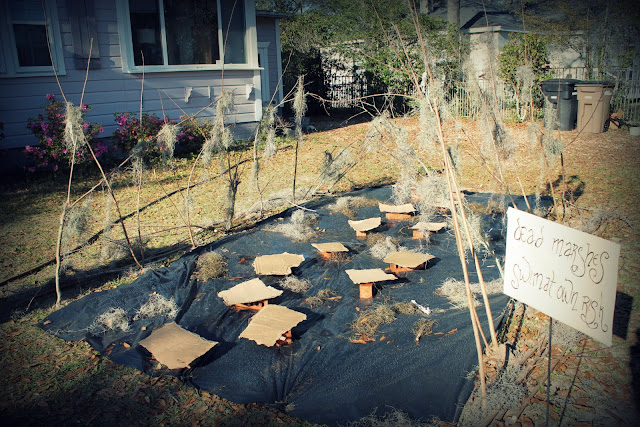 "Come hobbitses, soft and quick as shadows we must be!" 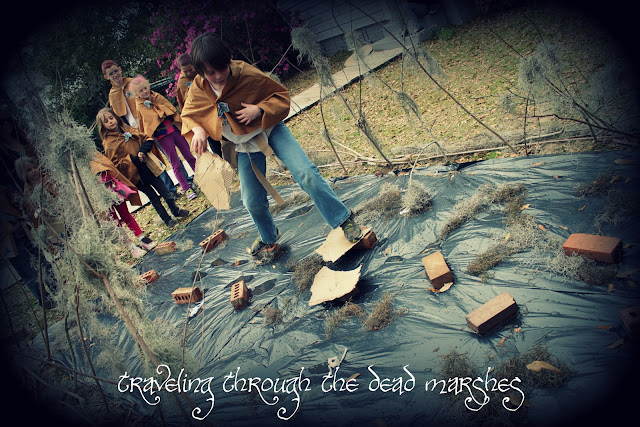 We made the Dead Marshes from several black trash bags stapled together, scavenged moss and tree branches, little plastic skeletons, bricks, and cardboard stepping "stones" and sprayed water on top.  The hobbitses were given 3 stepping stones that they had to use to get across the marshes.  A bit harder than it sounds.  We had a few slip below the surfaces with the dead things but pulled them back up. Don't follow the lights!
~~~
They went to war against a group of nasty Orcses... 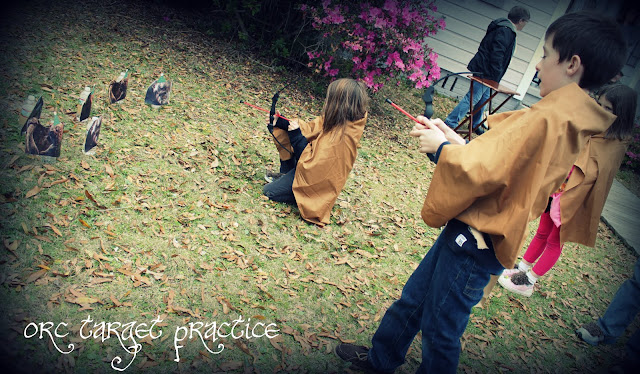 Bow and arrows were from dollar tree.  Made the targets from images printed of orcses taped to water bottles.  To help the orcses get in the party mode I made them little festive hats.
~~~
They caught raw and wrrriggling fish... 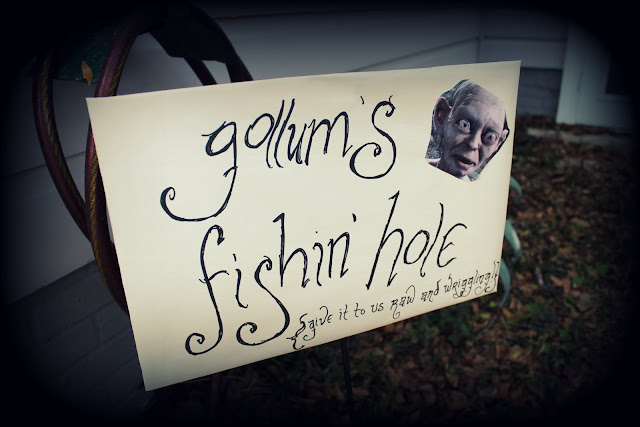 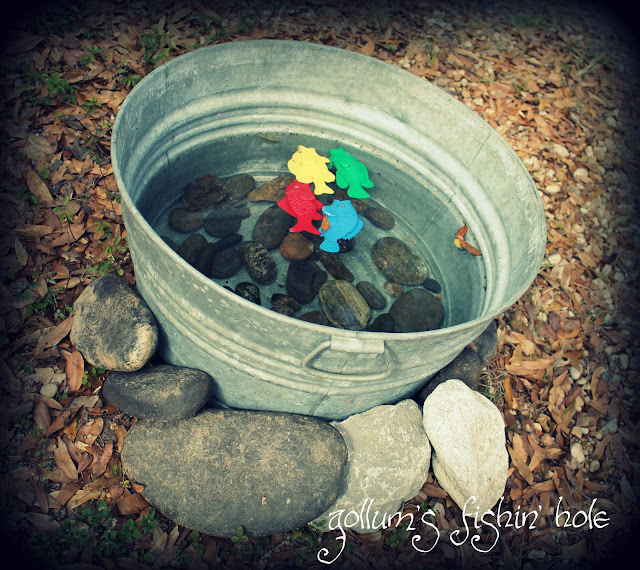 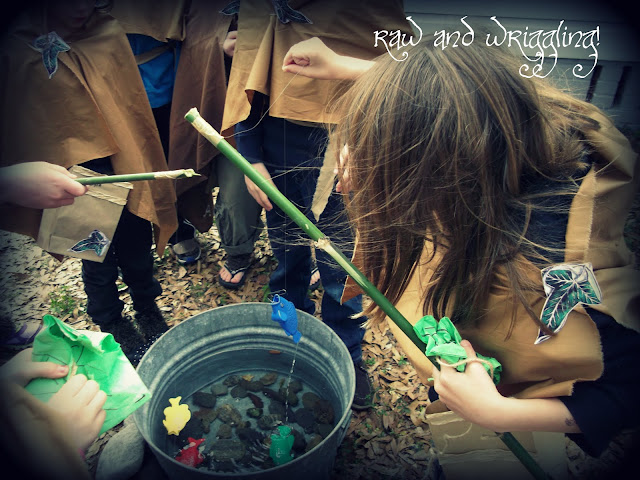 Items for this game were a metal washtub, plastic fish, water and bamboo poles.  All items we already had. Off to the left you can see a glimpse of the brown craft paper satchels with a leaf image on the corner. 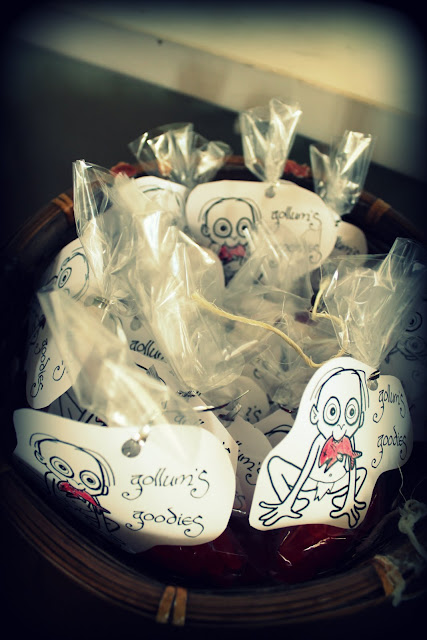 The hobbitses each got a little bag of Gollum's Goodies (swedish fish) after fishing.  It was about time for one of the five meals hobbitses eat after all!
~~~
They risked life going through Shelob's cave... 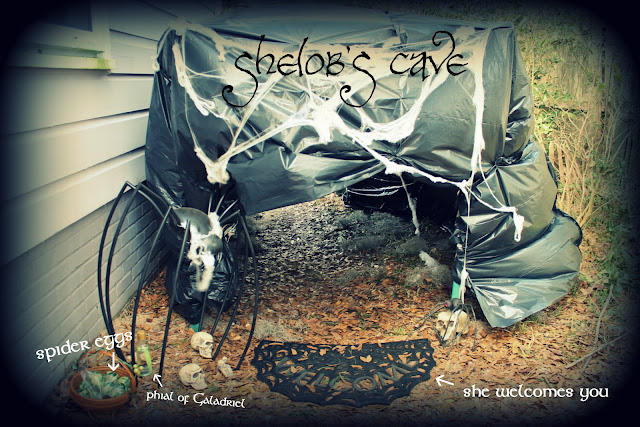 "She's always hungry.  She always needs to feed.  All she gets is nasty orcses.
And they doesn't taste very nice does they, Precious?
No.  Not very nice at all, my love."

As they went through the cave they had to collect one spider egg each that was inside.  They had to be very quiet and careful as to not awaken Shelob.  I made a Phial of Galadriel (clear glass bottle with a couple of glow sticks inside and water) for them to use as protection and "May it be a light to you in dark places, when all other lights go out."

The cave was made from black trash bags stapled together and attached to 4 metal sign poles.  Inside and out we put spider webs, moss and fake skulls of her past victims...
Come Hobbitses, come! 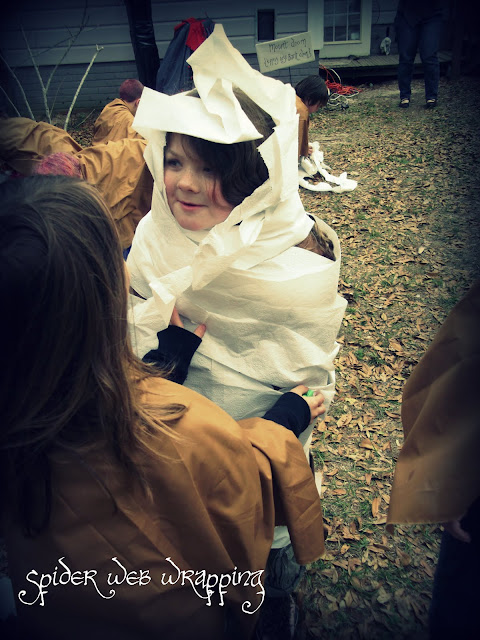 On the other side of the cave, the hobbitses were allowed to open their spider eggs.  Inside would be either a bit of web or a spider.  If they got a spider it meant they had been bitten by Shelob and the ones with the bit of webbing would be wrapping the victims in a web cocoon (of toilet paper).
Pumpkinbutt was bitten!

Lastly, on to Mount Doom! 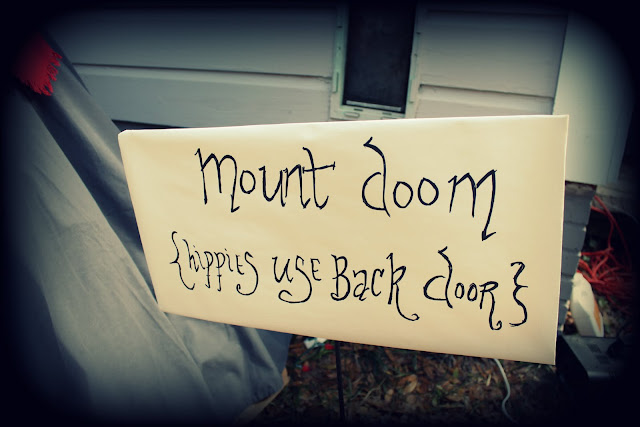 At Mount Doom the hobbitses had to cast the one ring into the opening on the volcano all while the Eye of Sauron was watching! 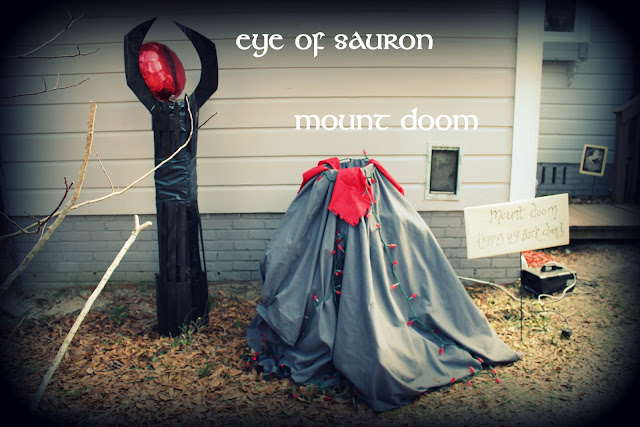 This game is basically a version of "washers".  I made the volcano from cardboard, newspaper, a grey sheet, red christmas lights, red fabric napkins and a fog machine.  For the washers, I bought ring-looking wood napkin rings from a thrift and painted them gold.  The Eye of Sauron was made from cardboard and a red mylar balloon.

Next up is the hobbit feast at The Prancing Pony!
Posted by my house is cuter than yours at 3/05/2013

Hi writer i am read your blogs this is very useful information you have post for users i love blogs for read and i like to write some my idea for discussion so it is best way to share your knowledge thanks for post nice information.keep it up.
Estetik

Hi! back to you writer! i love you love blogs for read too! Thank you for read my blogs useful information. i concerned about you like to write some idea for discussion though. may not be best way for you to share your knowledge. you may want to use nice information from proper english book or blog. good luck and keeps up good read.

Wondering where you got the Gollum clip art for the fish bags. Are you willing to share it? I have my son's party in a couple of days.

Fantastic ideas. I'm planning a teen Lord of the Rings party and love the swamp. :) Thank you for posting and sharing your creativity.

Thnak you for this ideas. I'm doing also a birthday about the lord of the ring.