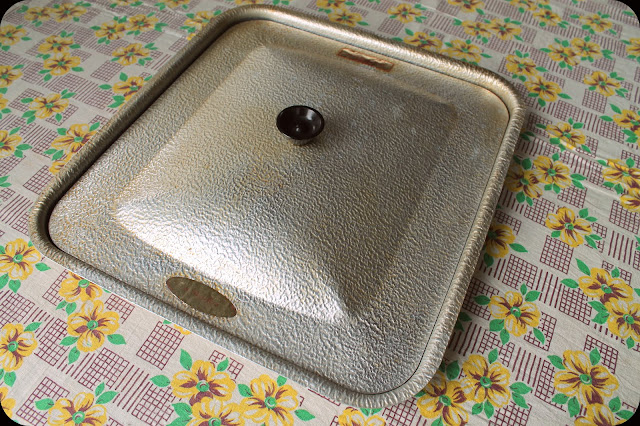 I picked up this aluminum "Mr. Bacon Pan"  at an estate sale for 5 bucks.  I actually don't like uni-tasker type kitchen gadgets such as this.  They are rarely used and take up valuable space that I could be using for something more important, like displaying my collection of plastic fruit.  I bought this as a bit of a peace offering to Mr. Husband, who gets a thrill out of electric potato peelers. Since it's vintage I decided to give it a chance. 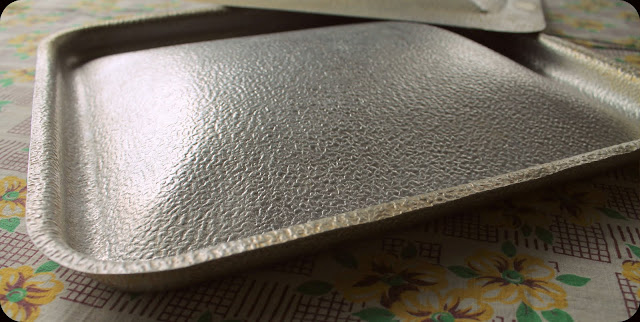 Mr. Bacon Pan is a two piece pan with a cover meant to bake bacon in the oven.
The bottom pan has a doomed shape to channel away the grease.  The shape of the lid, while made of light weight material, helps to flatten the bacon and cover grease splatter. 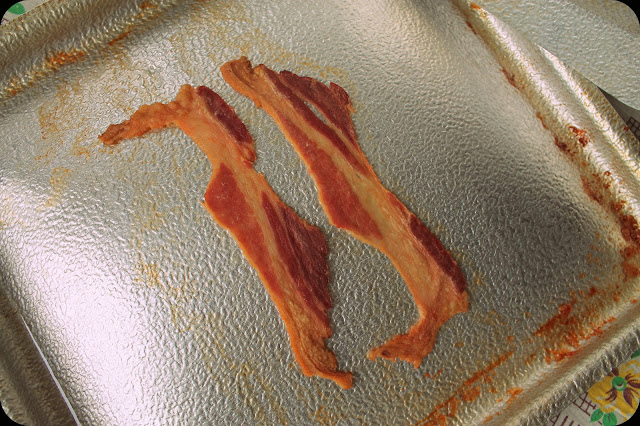 We happen to have a couple of pieces of bacon hanging out in the fridge so I gave it a test run.  I didn't really pay attention to the temp of the oven or the time (I never do!) but it seemed to bake up fairly quick.  All of the grease funneled into the edges leaving the bacon very flat and extra crispy.  The handle on the lid is plastic and I was worried it was going to melt or warp in the oven heat but it came through just fine.

The pan works well but we don't eat much bacon since it's full of delicious fat and grease...so, I doubt it's going to get much use.  When we do make bacon it's usually in the microwave, which is quicker and less to clean.  But microwave bacon is not crispy so....I'll let Mr. Bacon Pan hang out with the baking sheets for a bit.  Maybe I can come up with some other applications for it, upgrading it from a lowly despicable uni-tasker.

I think Rob needs this! I will have to keep an eye out for one!