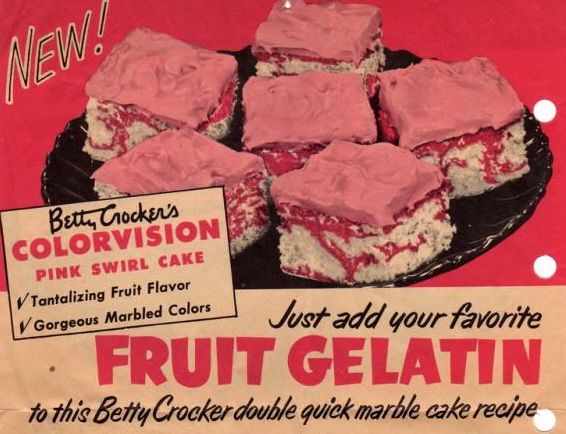 This cake has got it all, just about!  A fun name, day glow colors, an intriguing swirly interior, and jello is involved!
The only thing it's missing is marshmallows and coconut...but I'll take care of that! 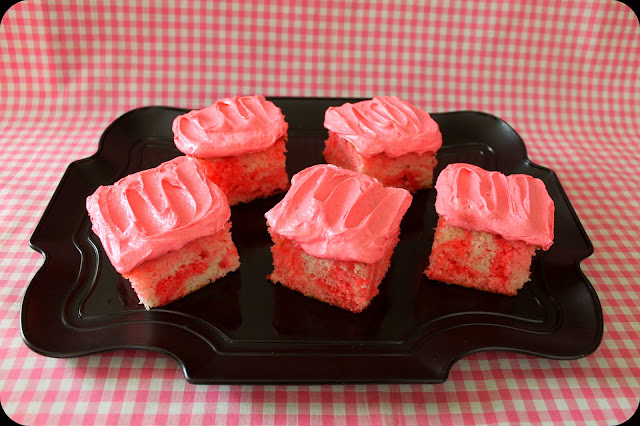 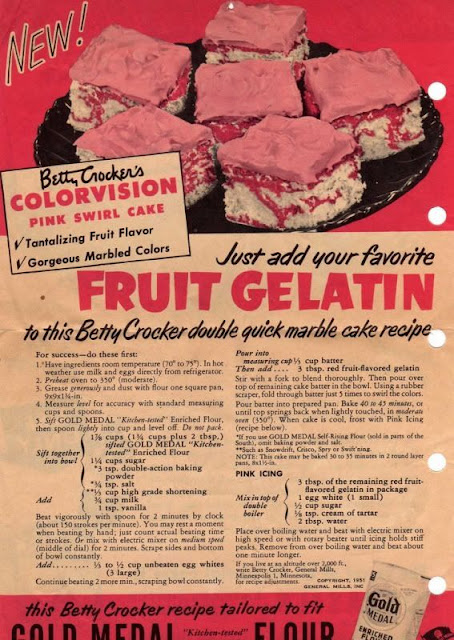 So as always, I used the recipe as a serving suggestion.  I decided to not waste my time making a "from scratch" cake as Gold Medal advises.  I went with a pre-fab white cake mix. I used a cranberry Jello as the "red fruit-flavored gelatin".   My marbleizing unfortunately did not turn out as amazing as the original.  But I have been studying on what I think I can do to improve it for another time.  First, I didn't take their suggestion of only tinting 1/3 cup of batter with the jello.  I called my own shots and did a whole cup...which was too much (but 1/3 is too little I think).  Their tip for the marbleizing was to pour colored batter on top of the white, while still in the bowl and giving it a few folds.  Then pour it into the pan.  Even with my using too much pink batter I would recommend a different way than this.  The original looks more like it has 'ribbons' of color.  Therefore I would scoop the individual batter colors into the pan, alternating kinda hodge podge layers.  I am really wanting to experiment with perfecting the ribbony look.  I think there are copious variations that can be done with different cake and jello flavors also.  Maybe even using a chocolate instant pudding mix in place of the Jello.


For the icing I did not bother with making a homemade one as the recipe calls for.  I took a gamble and used a tub of Pillsbury Fluffy Frost Marshmallow Icing, which I had never seen or heard of  before.  I added the prescribed 3 tablespoons of jello powder along with a drop or two of coconut extract to the icing for funzies.  Not pictured, but right before serving I tossed some shredded coconut on the icing.

It's just a bunch of prepackaged and processed sugary products but it was a huge hit.  Mr. Husband and a male pal of his were almost obsessed over it, even though it was pink girly swirly.  I will probably be making this one again because of demands and requests! 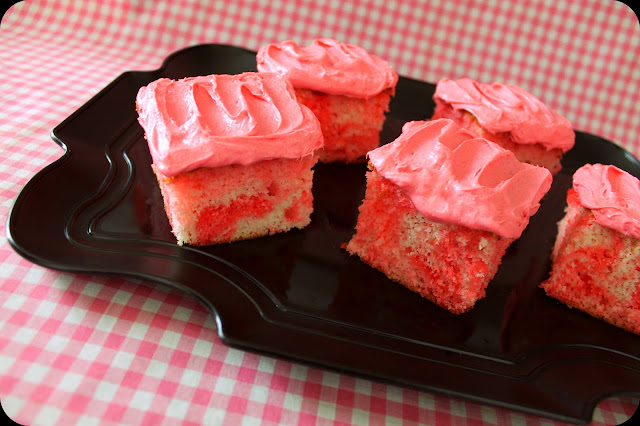 {Please note that I made this cake back in February.  We haven't visited our pals or family for months....and, well, we miss our pals.}
Posted by my house is cuter than yours at 7/24/2020

I must say that your version looks a lot better, Mary! Maybe 1/2 cup batter?

If you end up using pudding instead of the Jello, I would recommend using a cake mix that does not have the word moist or butter in the title. Pudding will add moisture to your cake and if the cake is already that way, it will become gloopy, if that makes any sense.

Good luck with your cooking adventures!

Thanks for the advice Jennilee! I may now just steer clear of my pudding idea. I have a feeling that even if I go with the proper cake mixes that you suggested, if gloopy is going to happen, it will be to me!