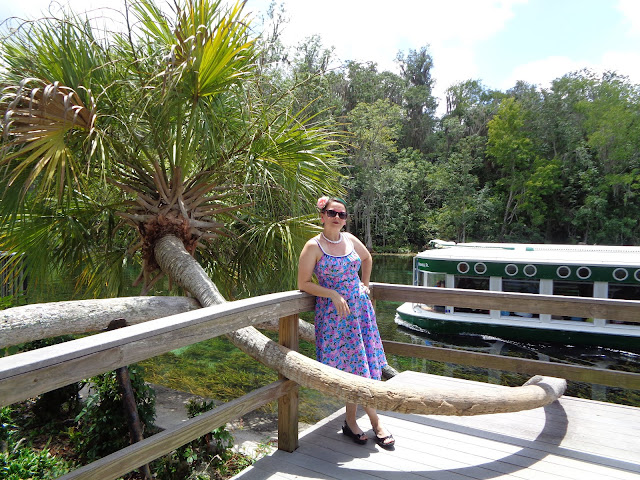 Our primary attraction when we went to Ocala, Fl was to visit historic Silver Springs!
I had visited in 2003, but Mr. Husband and PB had not yet been.

Here's a nugget o history:
Silver Springs began grabbing tourist's attention during the late 1800s with captains taking their sight seers down the crystal clear waters by steam boat.  It wasn't much later that the infamous idea of glass bottom boats was invented, which Silver Springs is so well known for.  During the 1920-30s, with automobile travel becoming more popular, the attraction known as Silver Springs was born.  It's biggest hey day was, of course, during the 1950-60s.  During this time the springs were used to film many movies and TV shows.  The most important, obviously being Universal Films Creature From the Black Lagoon.  The park has played host to a variety of additional attractions as well.  Ross Allen, a well known nature conversationalist and reptile handler had his base at Silver Springs from 1930-1970s.  Tommy Bartlett's Deer Ranch (1952-1975) featured over 200 tame deer which roamed free for guests to feed and pet.  Over the next few decades more attractions came and went, most including animal shows and exhibits.  The 1970s started seeing a decline in attendance, also known as Disney World.  In 1993 the state of Florida bought the park but continued to lease it out to various companies.  With numbers drastically declining throughout the last part of the 20th century and beginning of the new millennia, the state took over Silver Springs in 2012 and it became an official state park.  The glass bottom boats are still offered but that is about it other than the breath taking scenery of nature.  There are trails and a few museum exhibits showing the history of the park...and a small, extremely limited cafe (ice cream and pepsi....so ice cream and sewer water).

The beauty and history of the park makes Silver Springs a classic Florida attraction not to be missed.  It's a must-do if you are into old roadside attractions. 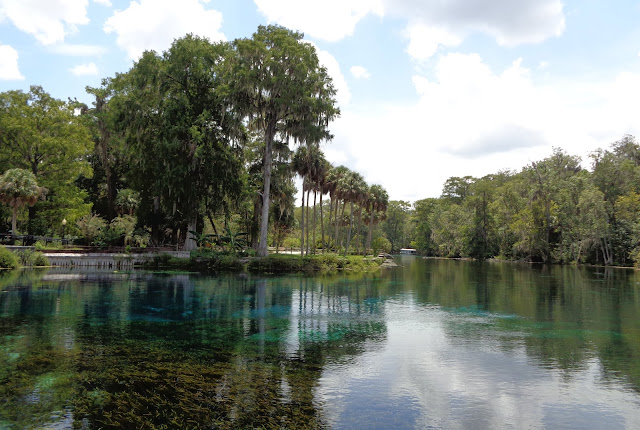 Our boat captain told us he has been operating a glass bottom boat for over 40 years.  And you could tell by his monotone speech pattern.  It was one of our favorite memories from the visit, the way he  spoke his spiel with a hum drum heavy southern accent.
"Tha.... waduh.... stays at a constant 74.... dugrees." 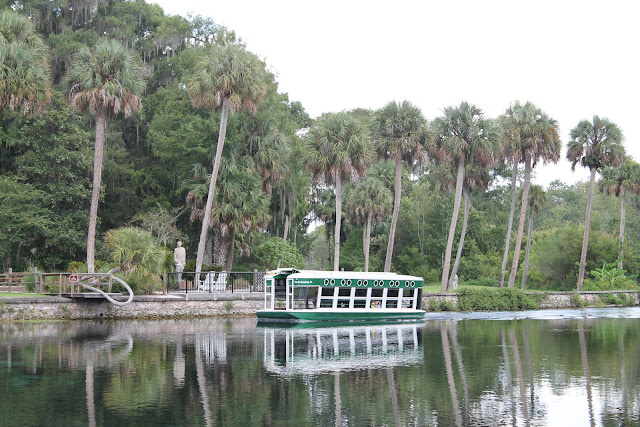 This is seeing through the glass bottom of the boat: 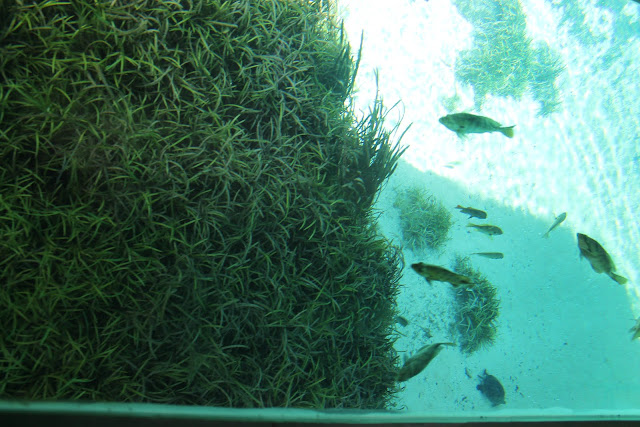 Even with there not being all the additional attractions (no alligator wrestling any more!) of earlier years, we still enjoyed the park immensely.  The museum areas were full of awesome vintage souvenirs and sweet lover air conditioning. 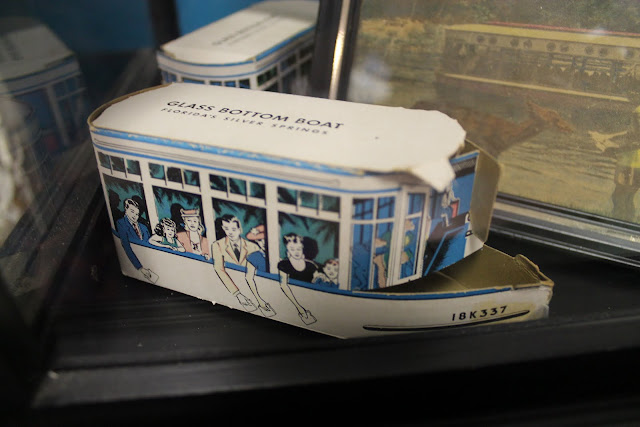 I loved this vintage paper boat souvenir showing that at one time you could hang your arm out the window and feed the fish slices of bread.  Those are both a big no-no now.  In modern times, the captain of the boat does sneak the fish some approved tidbits for the up close viewing pleasure of the passengers. 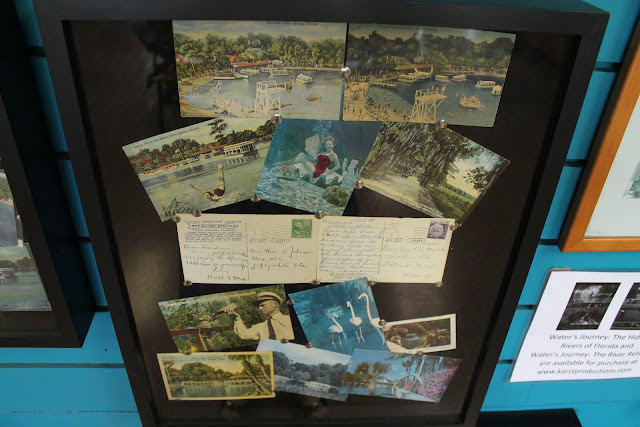 Many displays of postcards and brochures... 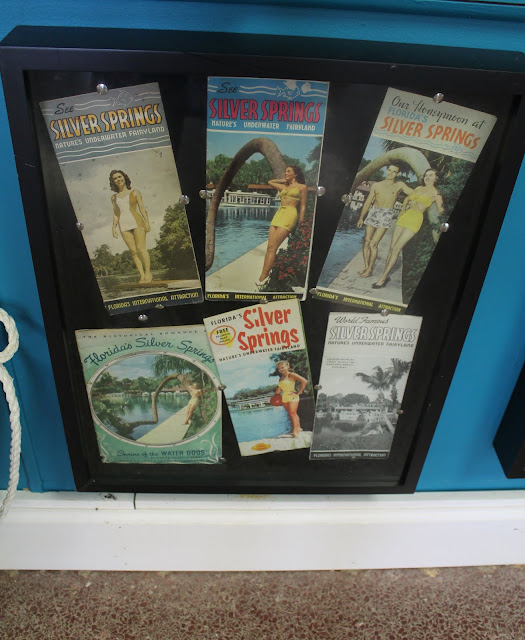 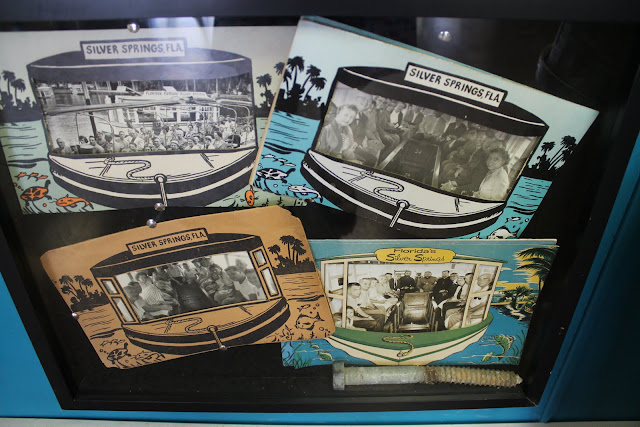 Creature from the Black Lagoon display: 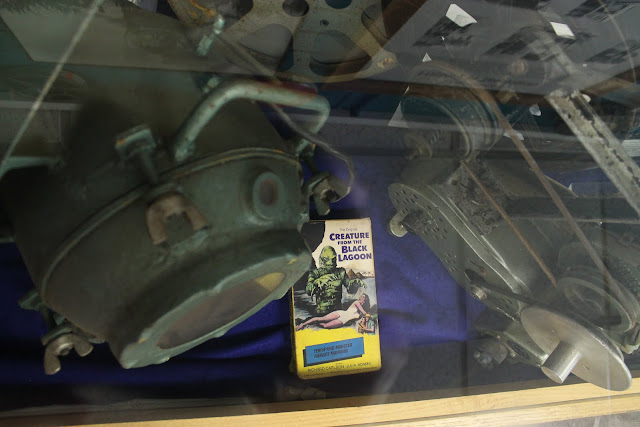 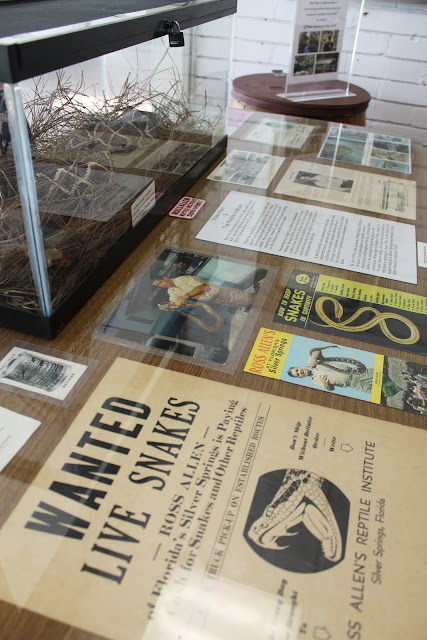 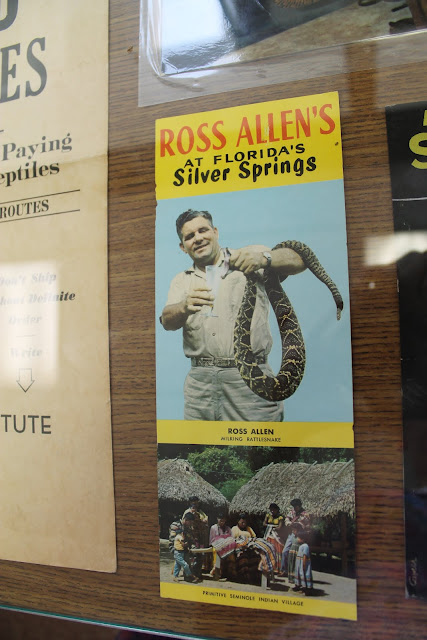 This was an amazing surprise: 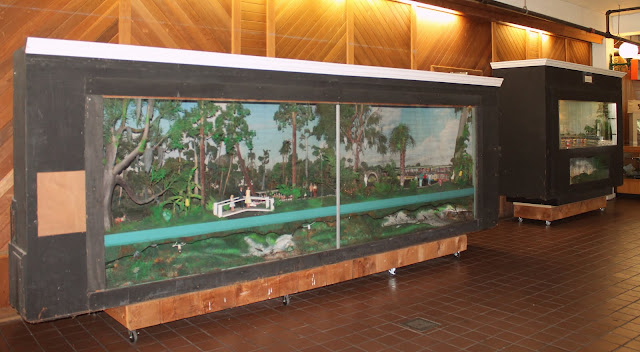 These are two huge dioramas that used to travel around the country to promote tourism for the park during the mid 20th century.  They highlighted special features in miniature with lights and moving parts, such as the boats gliding through the springs. 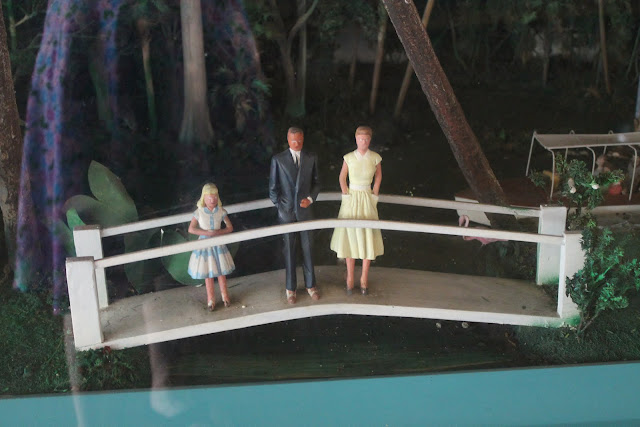 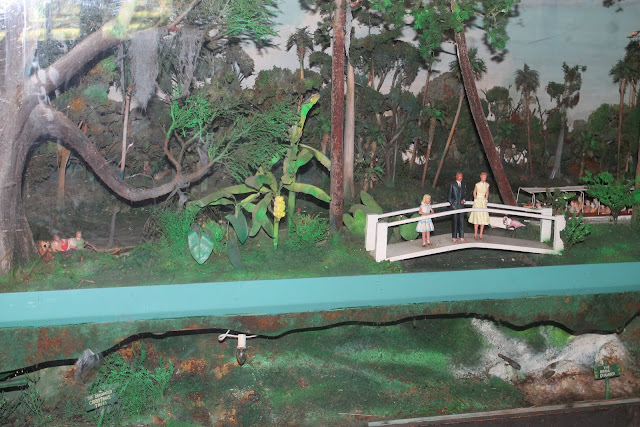 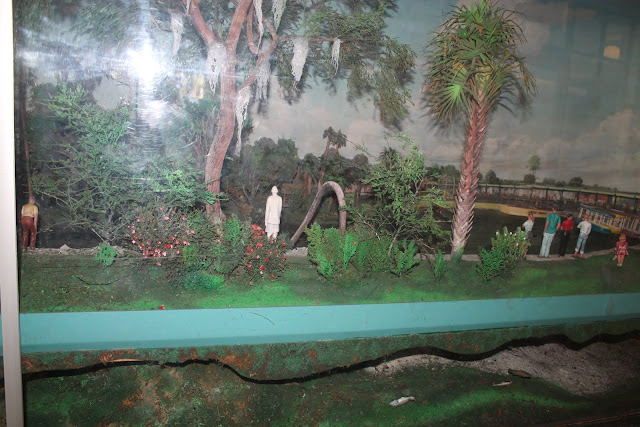 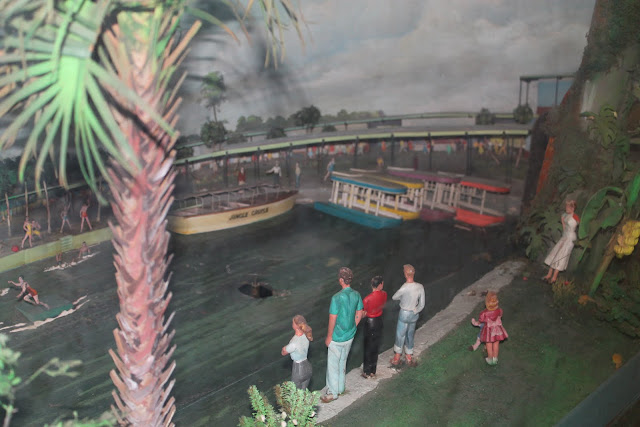 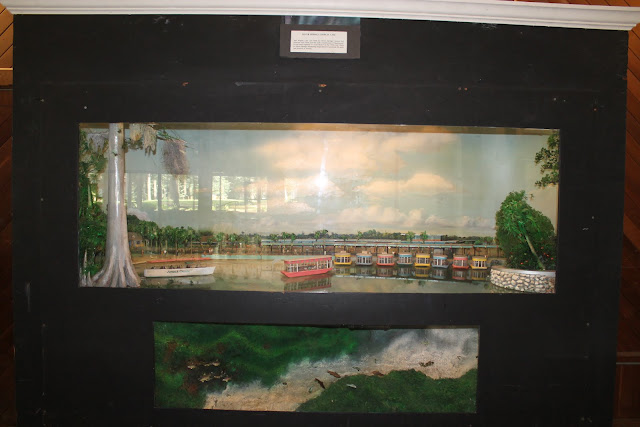 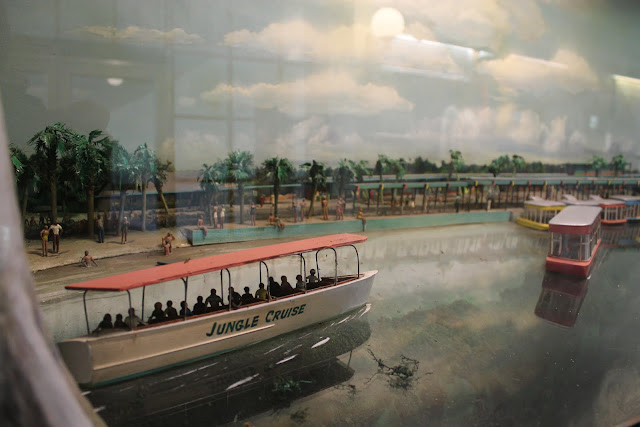 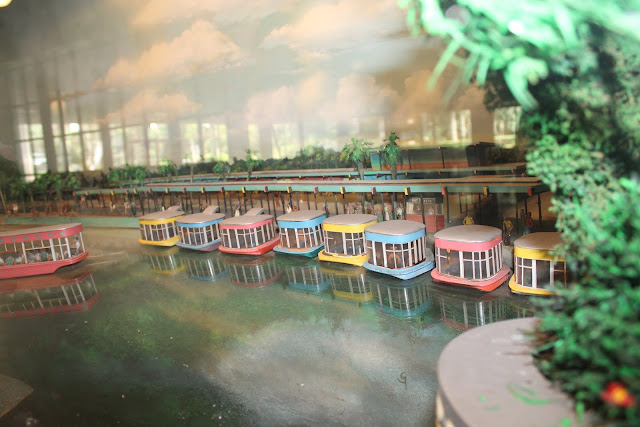 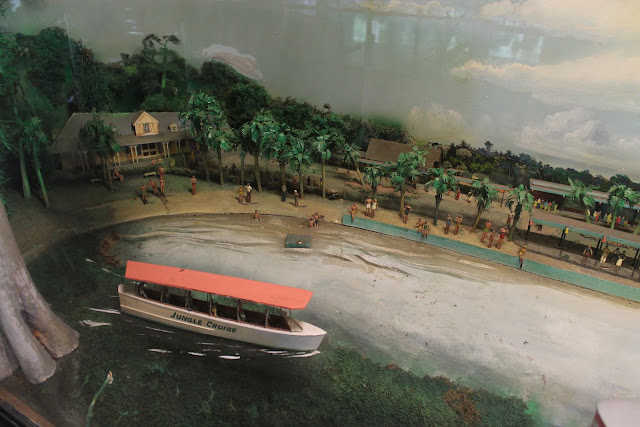 I thought these were marvelous.  An employee at the park said they are wanting to get them in working condition again.

When we visited the park it was early August and was horrifically hot.  Therefore we didn't do much of the trails. 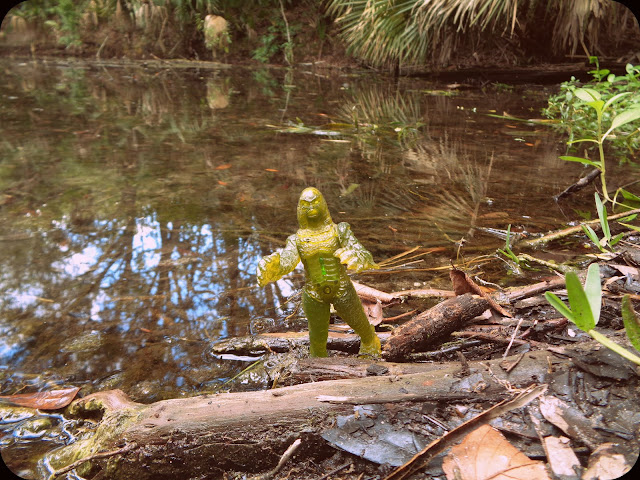 But we did come across a mini baby creature still living among the swampy region!

What a great trip, Mary! I've been stuck in the house since March, with only the occasional grocery outing, so this was a very nice virtual vacation!

There's still more to come! It's a 2 week vacation!