Tacky Holidays to you! 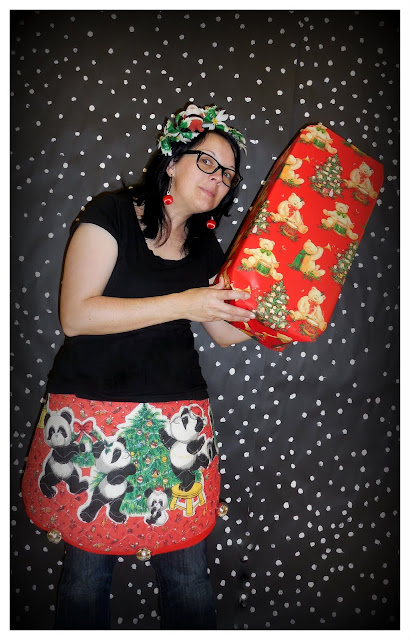 It's a Christmas flash back to 2014... PB's 5th grade Christmas class party!  I didn't have time to post about it when it happened, I was the room parent for 2 classes of 42 kids along with dealing with my own christmas ordeals.  Also the photos aren't very good. I was running the show so I couldn't take great pics also.  I decided to write it up this year anyway since I am feeling a little nostalgic.  The party was super fun and maybe someone out there would like to snag some of these ideas for their own holiday hootenanny.

For the theme of the party I decided to go with Tacky Holidays since it's been a super popular trend for several years now for adults.  I thought the kids would really get a kick out of having their own version.  I also chose it so I could incorporate some vintage and thrifted items into the mix.
I started by having the kids decorate their own tacky sweater christmas ornaments for the class tree: 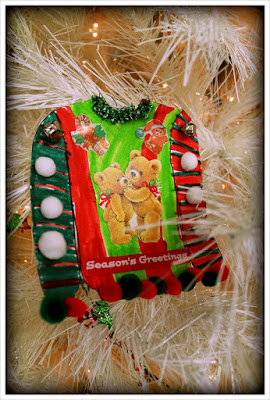 This is PB's.  As you can see he was going along with my christmas cuddly bear theme I was sporting.

I also asked the parents to send in any Christmas stuff they didn't want anymore, like wrapping paper, bows, stockings, hats, cards....anything and everything.  The more and varied the better and more tacky! 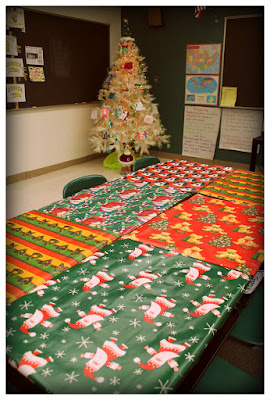 I got so much wrapping paper that I wrapped all 42 desks, the doors, and wrapped a bunch of big boxes for a photo drop background. 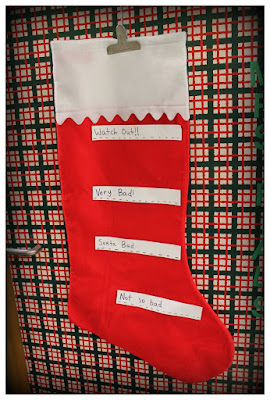 Within all of the stuff I got from the parents there were several huge stockings.  I decided to use them for a game I came up with called '"How naughty?"  Each teacher had one of these large stockings hanging on a door in their room with the top open.  I marked levels on the outside of each stocking.  On the bottom it had "Not so bad" and went all the way to the top with "Watch out!"  The kids each got 3 chunks of coal to try to toss into the stocking to see how naughty they could claim their teacher had been.  I made the coal out of wadded up black bulletin board paper.   The kids loved it but I had a precursory warning to them of if they threw the coal anywhere but into the stockings the party stopped and they would have to clean the cafeteria, eat spinach, and listen to justin beiber. 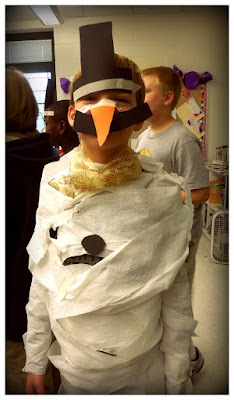 The next game was building a snowman.  I split them into teams and they were given a roll of TP, some ribbon, colored construction paper, tape and scissors.  They had only 8 minutes to turn one of their team members into a Charming Charmin Frosty. 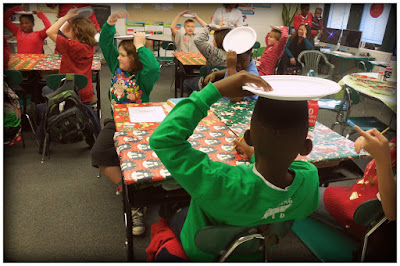 Another game was blind drawing.  They put a paper plate of their head and had to draw the holiday scene I described to them.   I think it involved a tree with decorations and presents under it.  Maybe a fireplace with a cat sitting next to it...I can't remember but I know if I was to look at the plates today it wouldn't be much help!

They also played a 'minute to win it' game where they had a tissue box strapped to their waists, resting on the backside, that had big jingle bells in it.  They had to bounce around until they got all the bells out.  I was scared we were going to get shut down with that game because the classrooms were on the second floor right above some first graders, but we didn't get any complaints.

The last activity we did was hilarious.  I came up with it from having so many extra stockings and wondering how to use them.  I thought it would be funny if I told the kids Santa had to do some major cut backs and had to give them stuff he had laying around his house as stocking stuffers.  I told them it was the thought that counted so when they pulled out their gift they had to say something nice and appreciative about it.  Originally I was going to just write odd gift ideas on slips of paper, such as a can of spam or toenail clippings.  But one of the other teachers started saying they had odd things laying around the storage room and before you could say "fruitcake", they had gathered 42 odd ball gifts for the kids: paper clips, sweet and low packets, an unwrapped blank vhs tape, etc.  PB got the vhs tape and I think it's still around here somewhere.  I wish I could remember specific things the kids said about their gifts, but I can't.  I don't think they thought it was as funny as we adults did. I laughed at least!

The last activity I had set up was a photo booth.  I covered a large wall with black bulletin paper and painted white snowballs on it.  I then had a bunch of large boxes wrapped to look like gifts along with all sorts of christmas fodder to pose with: wreaths, large plastic candy canes, santa hats, goofy springy tree hats, stockings, garlands...all stuff from the parents discards.  I took pictures of each of the kids, did a little bit of photo editing and then emailed the pictures to their parents.  I figured the parents had helped so much with sending in stuff that they should get a 'thank you'.

Also, of course, the kids made and wore tacky outfits at the party.  In the photo at the top of the post you can see my 1980's tree skirt I turned into an apron and my tacky head piece.  PB has the most amazing tacky 1980's troll sweatshirt as seen below.

Oh yeah, and we also had loads of junk food, drinks, cookies, sugary treats along with a multi-topping ice cream sundae bar.

And, at the end of the party the kids got to rip off the wrapping paper on their desks, which they enjoyed doing immensely.

This is how I do parties. Clark W. Griswold style! Over the top. 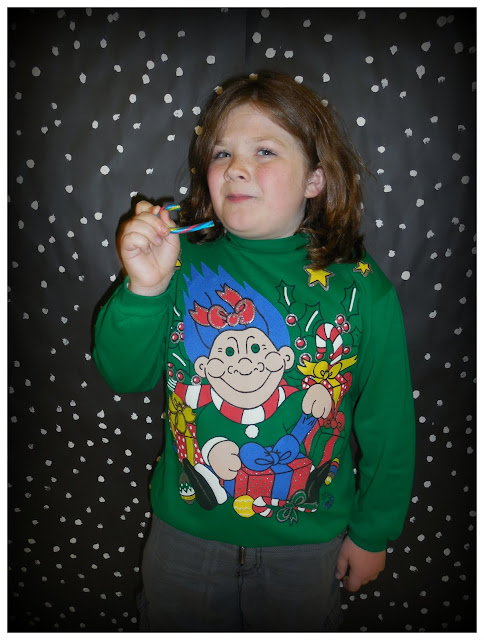 I was looking through the photos of the kids and PB and I couldn't help but get teary eyed.  I miss fifth grade.
Posted by my house is cuter than yours at 12/02/2017