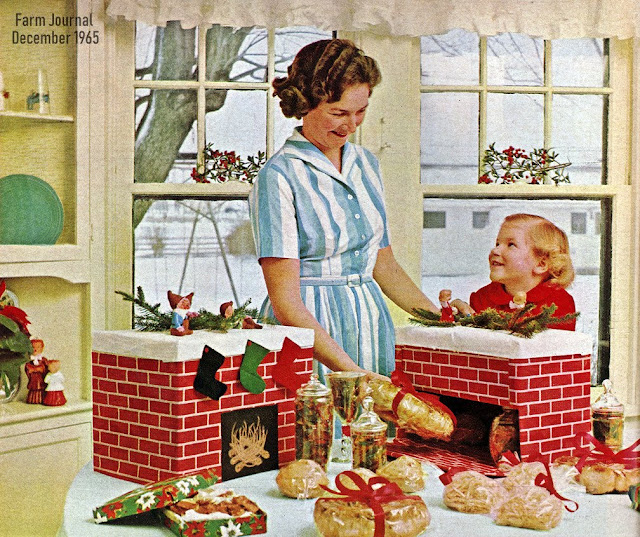 
For this year's baked goods gifts for fam and friends I was inspired by the above image from Farm Journal 1965.  Little cardboard fireplaces filled with baked nibbles and a bonus decoration on the mantle.  The originals have an oven door kinda flap to stash the goods behind, but I thought it would be more clever if the baked good was exposed and yule log looking.  I could not find brick printed paper in town and the effort it would have taken to make my own would have been a dullard thing to do for something that is going to go in the recycle can on Dec. 26.

So thinking outside the box and of course on the cheap, I happened to find a roll of wrapping paper that was double sided, with red and black buffalo check ( it's brick-ish to me!) on one side and a red/black wood grain on the opposite side.  Perfect!  The paper is made by Hallmark and I found it at Walsmart for about 2.50 for the roll.  I was able to get perfect sized boxes for free from the grocery store while they were restocking the Lean Cuisines.  I cut the icicles from a long strip of white paper and hot glued it on.  The andirons are just black paper.  I also included in the back of the fireplace a copy of the recipe for the loaf.  I made a couple from Pillsbury Bake Offs from 1949 and 1951, but those are gonna have to be posts for another time.
I thought it would be fun if the stockings hanging from the mantle were also the gift tag.  I free hand cut them from scrapbook paper and added a letter sticker to the front.  All of the mantle decorations were different.  I made them from little bits and bobs I bought from thrift stores.
I made 6 of these but here are the two I was able to get photographed before folks took off with them. 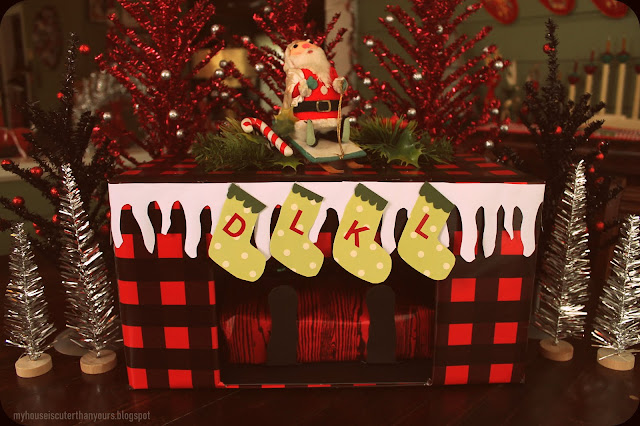 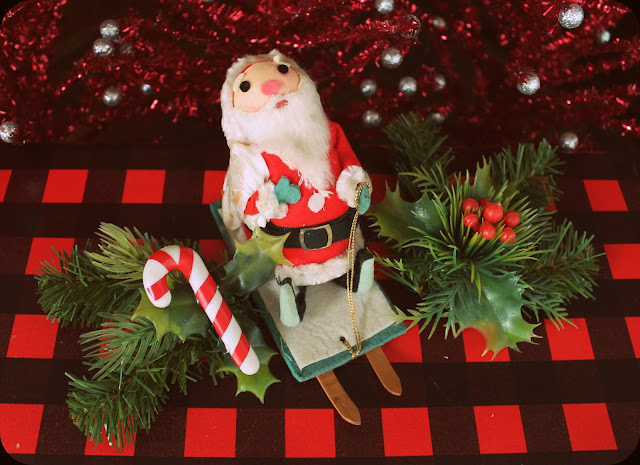 The last K and L are two precious boston terriers that belong to D and L.  I stashed a little sack of doggy treats in the fireplace back for them! 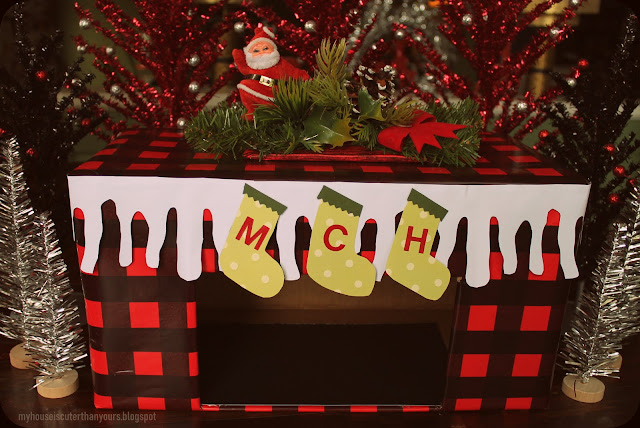 This one doesn't have it's loaf in it because it hadn't happened yet. 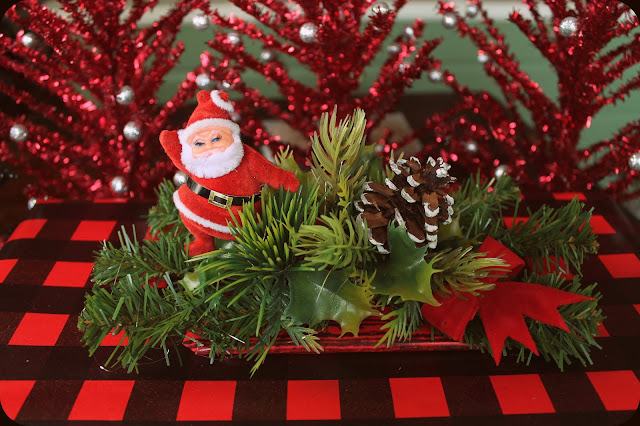 For the topper on this mantle I decided to glue it all to a rectangle of cardboard wrapped in paper so it could be plucked off and used in the future as a bit of a Christmas decor centerpiece.

If I had thought of it sooner it would have been fun to place an electric/battery powered flame light shining behind the loaf logs!

I told everyone we gave one of these to not to feel they have to keep the whole contraption.  It's all cardboard and paper and I did that on purpose so it could be easily recyclable.  I found out that my mom and grandmother carefully unwrapped their loaves to save the paper so they can set up their fireplaces next year!

Oh those are cute, Mary! You did a wonderful job! And it sounds like they were appreciated....always a good thing!