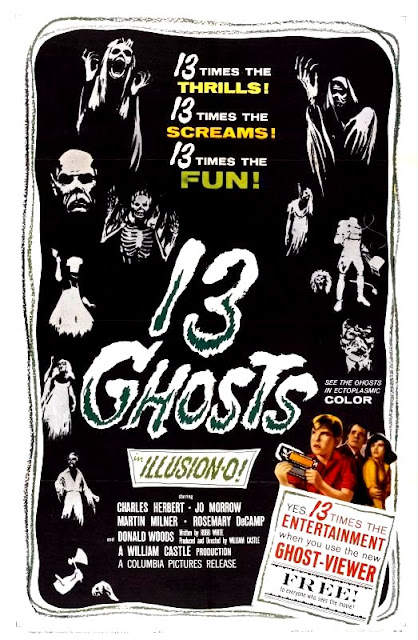 William Castle's 1960 movie 13 Ghosts has become a holiday tradition around our crypt.  I love William Castle and all of his fun gimmicks he used to promote and involve the audience with the movie and theater experience.  He had patron-looking employees staged at performances to scream or dress up like nurses to tend to anyone who suffered a fear induced medical mishap from viewing the film.  He had ambulances parked in front of the theater, $1,000 life insurance policies issued to anyone who died of fright during viewings, fake skeletons that would swoop down during the showing, and electric buzzers installed under some of the seats that would go off during pivotal points.  There were also gimmicks within the film such as 'Fright Breaks" in the movie Homicidal, where a timer would appear on the screen right before an extremely suspenseful moment, giving audience members a chance to leave, which they were then given a Coward's Certificate along with a refund.  In The Tingler, the monster is expected to be in the theater when the lights suddenly go out, next the film strip goes white suggesting the projectionist has just been murdered...and that's the pivotal point.... electric seat buzzers start going off!  I can't believe such creativity, imagination, fun, and effort ever existed in this world. 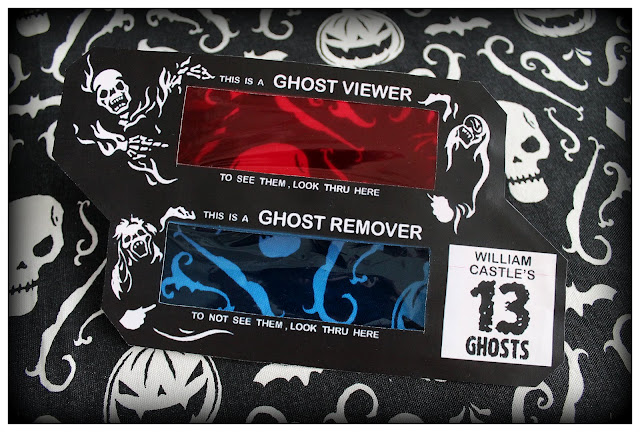 In 13 Ghosts the gimmick was being able to see..or not see the ghosts in the film by means of the Ghost Viewer. The movie is filmed in black and white with overlays of blue and red during the ghost appearances.   For the faint at heart they could look through the blue screen to not see the ghosts while thrill seekers had the red view screen to intensify the ghost presence. We own the movie but do not have a Ghost Viewer, which the movie poster claims it will boost "13 times the entertainment".  To increase our entertainment value I had to make us a set of our very own Ghost Viewers (How-To below)! 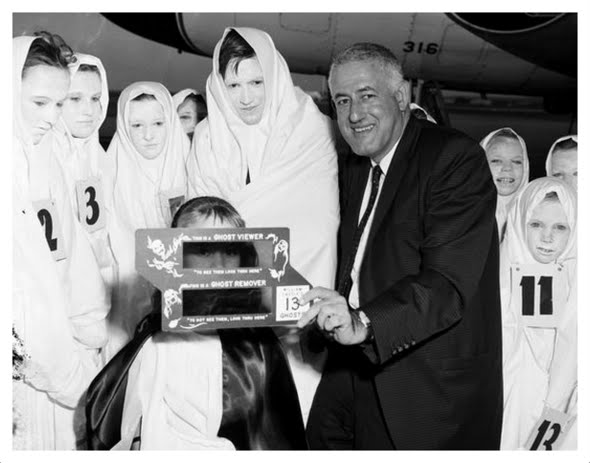 Here is an image of William Castle along with some local members of his Horror Advisory Board and Fan Club in San Antonio, TX showing off a Ghost Viewer during a 13 Ghosts premiere in 1960.  I wonder if Mr. Castle stayed at the Menger Hotel during his visit? 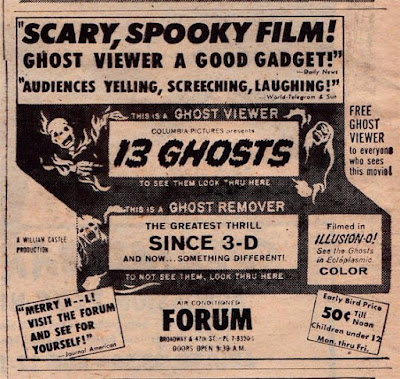 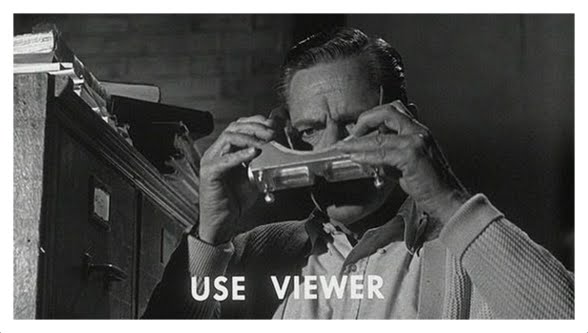 To make your own Ghost Viewer:

*Locate a good quality scan of a Ghost Viewer from the nets and print out full page on card stock
*Purchase red and blue cellophane (I got mine from dollar tree.  They were both cellophane gift wrapping.  One was a bag intended for shrink wrap and the other was on a roll)
*Cut out viewing areas from the Ghost Viewer with an exacto blade.
*Cut and glue or tape pieces of cellophane in appropriate spaces. 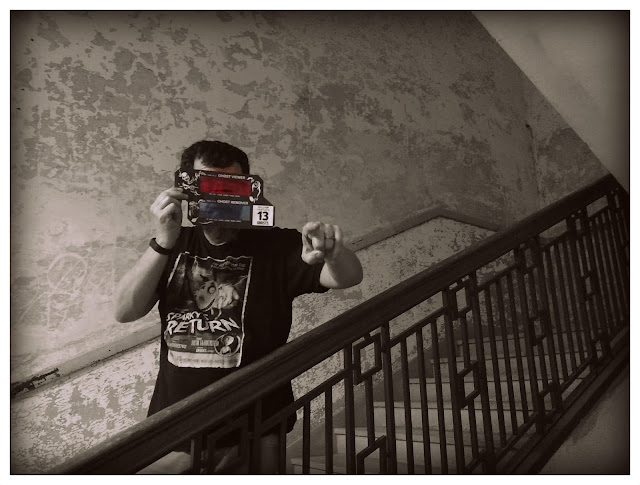 See ghosts in ectoplasmic color!
Posted by my house is cuter than yours at 10/13/2017

Such a great movie! I haven't seen the remake (nor do I care to)!

I love the gimmicks they used back them too. Such imagination! Now it's all blood and guts and gore.

Oh yeah, I'm not going to see that piece of poo either! I don't do blood, guts, and gore either. The only experiences that I think come close to this kind of fun and imagination is a Weird Al concert and Disney Land/World.