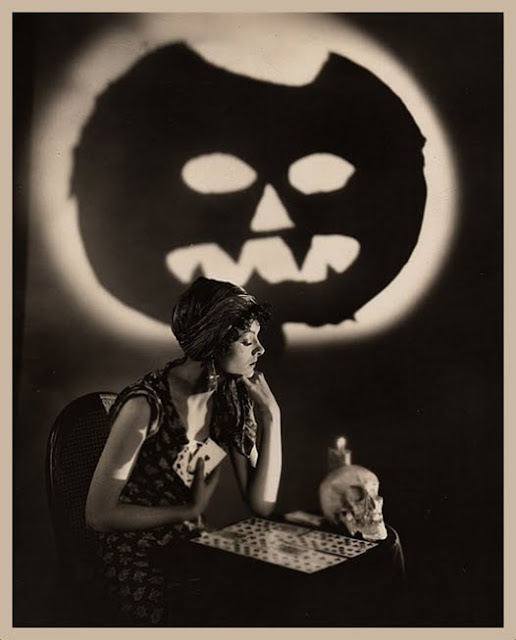 💀 💀 Halloween 💀 💀
It is now only a sweet memory.
I like to write a "Halloween wrap up" entry every year to mention a few spooky fun things that we did but I didn't dedicate individual posts about.  Mr. Husband Sir and I went to a Haunted Barn/ Hay ride this year called Creeptown.  We went last year also.  This year it was set up in the artist's barn where she lives in the middle of nowhere aka 'the boonies'.  It's a good mix of cheap store bought stuff (dollar tree tomb stones), expensive special effects (projected images of dancing skeletons on the walls, antiques (a Victorian  horse drawn hearse), and handmade sculptures (carved vintage looking carnival characters).

We also went to see The Addams Family Musical performed by a local college theater group.  The costuming was great and so were the musical numbers.  I thought the story line was a little weak and not "Addams" enough for me.  It's not a play written by Charles Addams or based on one of his cartoons or even an episode of the show.  Wednesday is all grown up and wants to marry a 'normal' guy.  The normal guy also has very normal uptight parents which the play mostly centers around them meeting the Addams family.  I will say the play has a sweet moral message of reminding people to not forget the fun carefree personalities they had when they first met their spouses and not to turn into boring "adults".

This year PB decided he wanted to go trick or treating, which is something we skip out on most years.  Once or twice he has gone by a couple of houses belonging to people we know and that's it, he just hasn't been in to Trick or Treating ever.  Most years we stay home and have a spooky themed dinner while making sure we don't accidentally turn the porch light on.  We don't give out candy anymore because the people who come by our house don't wear costumes or say "Trick or Treat" even.  They just have a walmart plastic bag and then have the nerve to ask for extras.  Last year it rained so we "Trick or Treated" in the car by driving around the neighborhood and when we saw a decorated house we said 'Trick or Treat" and grabbed a candy out of a bowl I brought.  This year, since PB is feeling the pull of childhood slipping away, he wanted to go T-or-T for real.  The best thing about this year was the temperature wasn't in the mid 90s.  It was actually chilly outside!  I think I may have come up with a family tradition this year that was a lot of fun for PB.  I have a SUV type car that the back seats can come out and it has a tail gate.  I decorated the inside of the car with spider webs and skeletons and played the Haunted Mansion music.  Since we were going to be driving very slow in our neighborhood I allowed PB (with his step dad right next to him) to ride in the back of the car and exit out of the hatch so he could get in and out easier.  Oh my gosh.  He had so much fun getting lots of candy, lots of compliments on their costumes, and getting to ride in the car illegally.  I am one who had him in a booster seat til he was in 5th grade so this is certainly out of my norm.  We noticed that most of the kids out begging for candy were older so I think PB has plans of repeating this adventure next year.

Something this year I didn't do for the first time in 15 years was go post-Halloween shopping.  Usually I hit up all of the Targets in my surrounding area for 50 percent off Halloween goodies first thing Nov. 1.  This year I kinda took a peak at what was on the shelves on Oct. 30 but eehhhh, nothing good.  That hasn't stopped me before in the past though from trekking around.  Not only did I not go out on Nov 1 but when I did check out what my nearest Target had a couple days later (only went because I had to pick up something else), I didn't buy one thing.  Not one thing.  Not even one bag of plastic bugs.  This is thanks to my new KonMari mind set.  I have plenty of Halloween stuff and I didn't see anything that sparked spooky-joy.

Lastly, we did our started-last-year tradition of the 'Pumpkin Pitch'.  This is were we toss the decomposing JOL from a high surface (like a 6 foot ladder) onto the ground.  We did it from the roof this year but it was a bit of a dud.  The pumpkin just broke in half when it hit the ground, I guess it wasn't rotten enough.

This Halloween season seemed to zoom by but at least we did squeeze in a few fun things.

There also was the "spooky television" and "spooky film projector"...but no, I didn't really like them enough to have to find a place for them to live during the other non-Halloween decorating months.
I decided to go ahead and take all of my Halloween decor down this week and was pretty excited that I was able to get just about everything to fit in storage bins I already owned. Generally all of the blow molds have to live in a couple of large black yard debris bags but I got rid of enough random Halloween stuff during my Kon-mari-ing that now they aren't living like trash!
~mary~