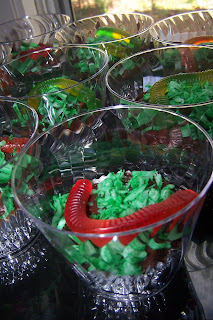 i made these cupcakes for pumpkinbutt's class recently. they are studing gardens/plants/ creatures right now. i also brought in a large container of real earthworms for them to look at. Then read a book to them called "Yucky Worms " which has interesting facts and experiments younger kids can enjoy, like how to know which end of the worm is the head or tail (the head is the end that heads down first in the dirt). 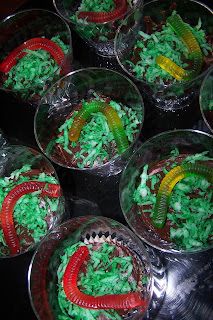 the cupcakes are covered in chocolate icing dirt, green tinted coconut grass, gummy worm on top and then placed inside a clear cup. i covered the tops with cling wrap for the complete terrarium look.
Posted by my house is cuter than yours at 3/21/2011 2 comments: