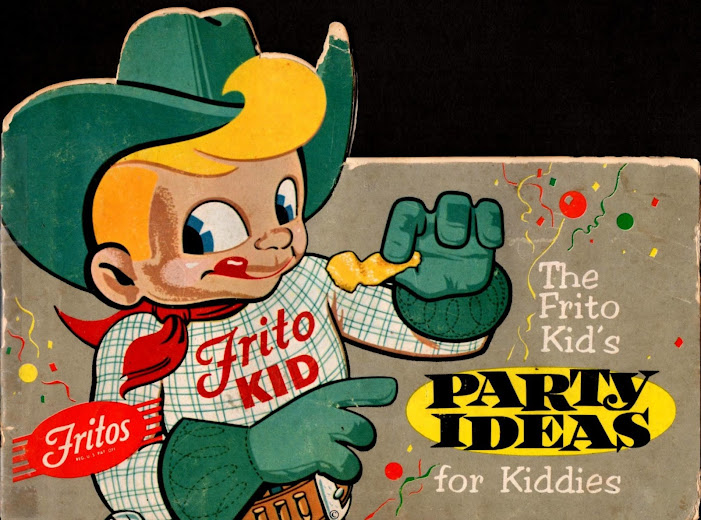 From my 1954 Frito Kid's Party Ideas for Kiddies booklet I present June's Party theme: Cowboy Party!
Maybe Frito Kid's birthday is in June because this one is right up his tumbleweeded alley! 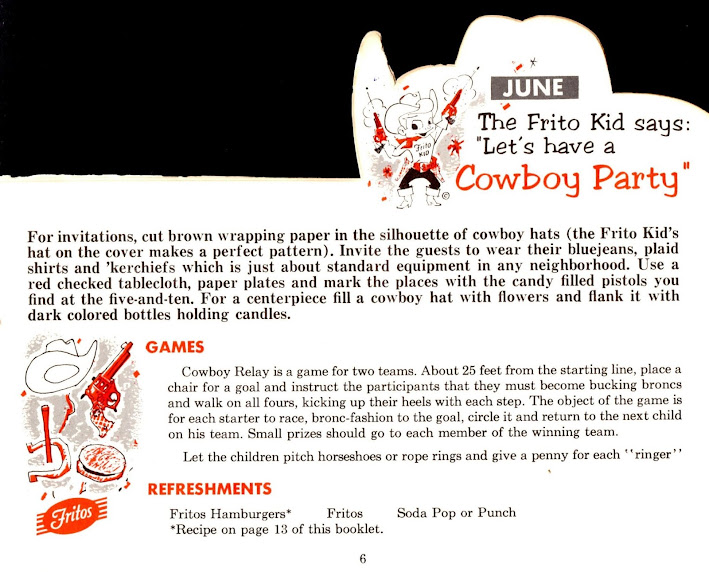 This party includes something new, a recipe for Frito Burgers (given below). 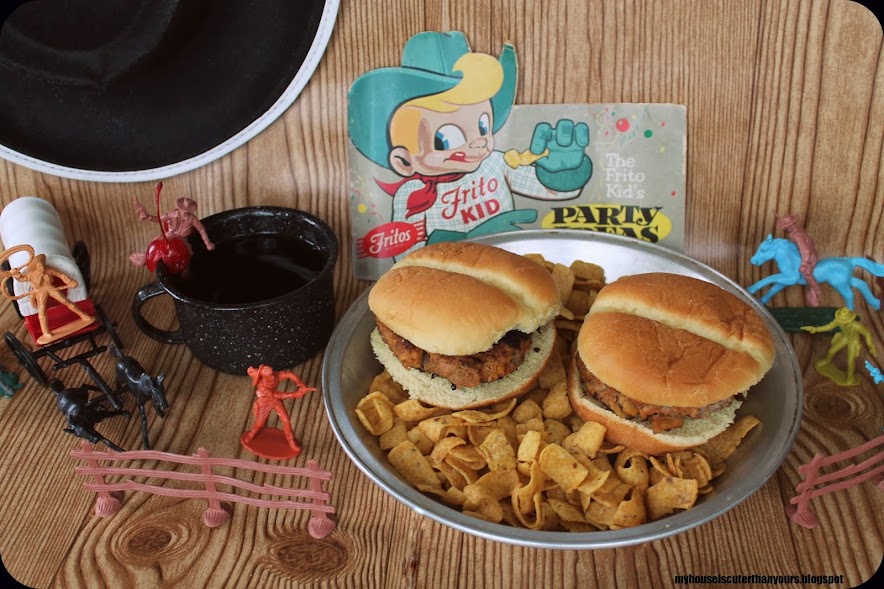 Yeehaw!  Sody pop in a tin cup, Frito-fied burgers, and panning for chips of gold! 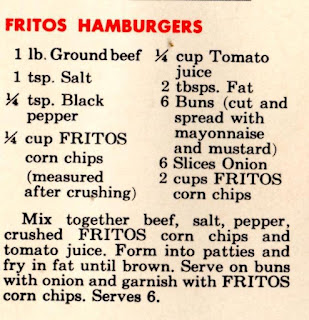 So what did I do differently from the recipe, because you know I have to put in my own little tweaks.  I used ground turkey to cut calories, only it does have the tendency to be a bit bland.    I also used spicy ketchup in place of tomato juice.  I added some Tony's seasoning and some dehydrated onion to the meat before pan frying.  The grocery store was out of the bakery slider buns I had requested and subbed Hawaiian sweet rolls instead, which I had my doubts about.  I'm not a fan of sweet stuff on savory...only savory/salty on sweet.  I thought the burgers where surprisingly good even with the slightly sweet rolls.  All of that added salt from the corn chips helped the blandness, but I think the real flavor was courteous of the ketchup.
That's a trick I will hold onto for the future. The corn chips didn't add any crunch since they are mixed in with the moist meat and they kinda sogged out by the end of frying, but not in a bad way, just melded together.
Now don't be a yellow bellied varmint! Treat your favorite cowpokes to some Frito grub from your own chuckwagon!
And till next time, Happy Trails Partners!
Posted by my house is cuter than yours at 6/27/2021 No comments:

{Household Magazine April 1954}
The first recipe {see here} I posted on the first day of MhiCty 16 years ago was for "Pine-Applesauce Dessert".  Only I didn't give the recipe (click above image for that) or much less the name of the damn dish.  I was more memorized by the flower garnish made from marshmallows.  I still am!  So I thought it would be fun to have a do-over for this year's post, and include pertinent information...like what it tasted like! 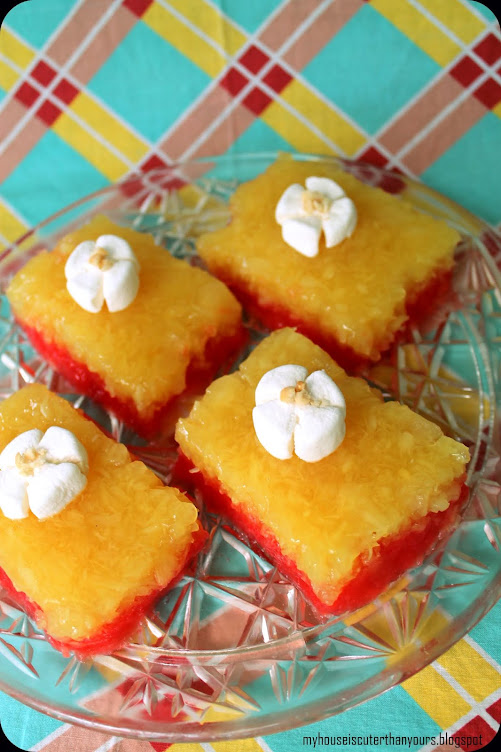 Ta-da!
This dish has a refreshing taste and is perfect to stave off the searing heat of the summer.  I decided to "healthy" it up by using sugar free on all ingredients other than the marshmallows, making it diet friendly.
On construction: I am not too pleased with the lack of jelled consistency I got compared to the promise of firmly congealed bars presented in the original recipe.  The applesauce layer on the bottom deflates on the plate even after hours of chilling.  Their layers are precise and even but the reality is more of a slopped together look.  Those original bars look like they were cut with a laser while mine appear hacked out with a throw pillow.  And believe me, I worked to get mine looking presentable.  I layered them with a level (eyeballed really) and cut out the "bars" with a sharp Ginsu knife (a generic Big Lots version).
The fault is not with me, that I know.
Maybe jello was made of stronger stuff back in 1954.  Asbestos?  Who knows... but look at those marshmallow flowers!  They turned out perfect! 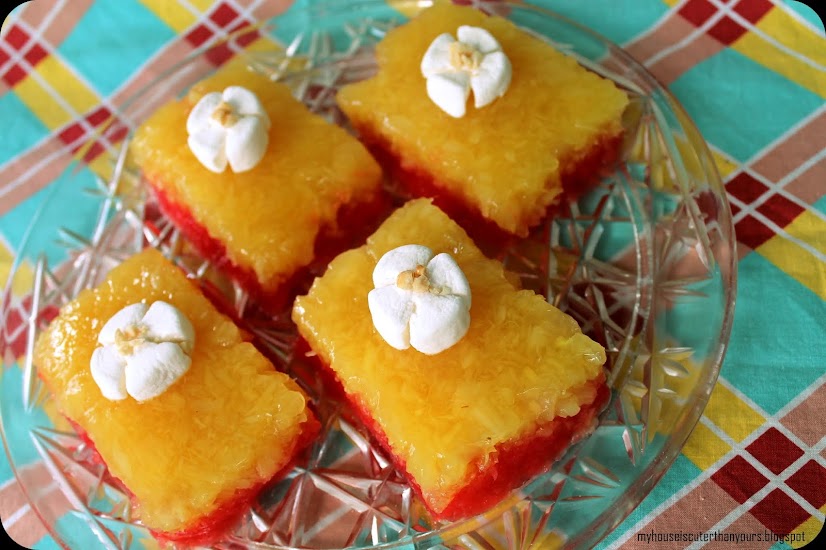 I have noticed a trend that for dedicated blog writers the "seven year itch" is about at the 15 year mark.  It kinda blows my mind that I have been doing this for so long and I don't have any intentions of quitting.  I am always coming up with things that I want to try, showcase, or comment on.  I started out doing this blog to be part of a community but most of those members jumped ship years ago.  I then shifted to doing this just for my own amusement and if anyone happens to stop by there's always some potted meat canapes and clamato punch they can snack on.
I have mentioned before that this blog is my happy place where I put my best foot forward.  However when life is at a low I don't have the creativity or the motivation.  I am not good at faking it.  It's interesting to me to look at the number of posts that I do each year because it follows a trend in my real life.  When life is going well I am more creative and productive.  When my life is near rock bottom I just can't do this.  This past year has been bad for everyone in the world.  Even without covid happening it's been very bad for our family.  And right now I am not feeling it for "happy".  I don't want to besmudge MhiCTY with negativity so I will not go into details.  I am just formally putting it out there that posting is going to be sparse over the remainder of the year.
Oddly enough I have been toying around with the idea of starting a separate blog that is kinda the opposite of this one.  No pictures, long ramblings, and tons of bad mood.  It would be a place where I could also write about one of my passions which is stuff, decluttering, and the psychology behind our relationships to possessions.  But again, it would not be dusted, tidy, and shellacked like posts are around here.
Ehhh... I doubt people want to read my incessant bitching unless it's topped with a shit ton of marshmallow flowers!
Posted by my house is cuter than yours at 6/23/2021 No comments: