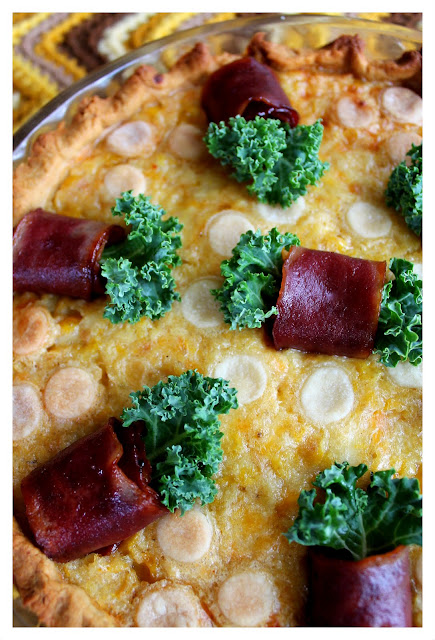 My most favorite modern sitcom is back for a short run!

I have mentioned a few times how much I love the show:

Birthday Goodies 2005
I bought Season one on DVD in 2005.  I had received a gift card for my birthday and was adamant I was going to use it to buy stuff that was practical and I needed.  When I came home with Roseanne on DVD it was certainly questioned as a useful item.  But it is!  I have long since then acquired the complete series and Mr. Husband and I have watched it beginning to end many times. 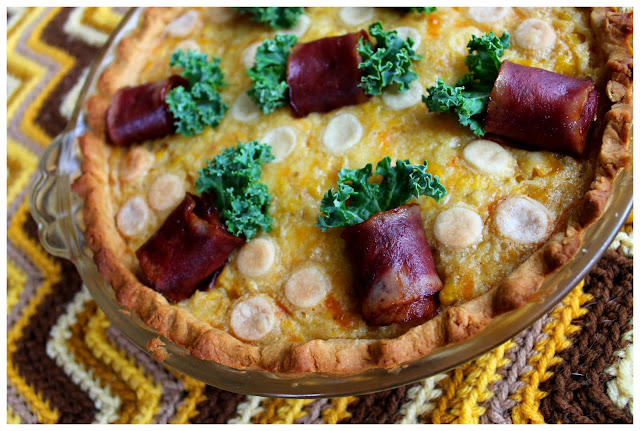 Spooktacular Halloween Shows
Roseanne Halloween shows are legendary.   We were inspired by season 3 when we went as Lumberjacks: Lumberjacking 2012 . 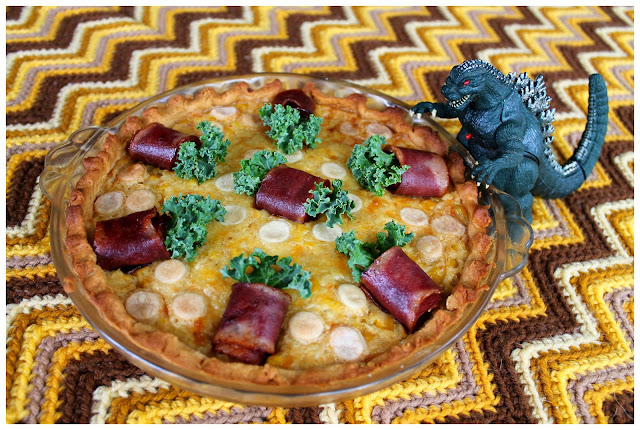 And lastly, if this doesn't cement my admiration for the show nothing will.
I call my son PB (Pumpkinbutt) as a reference to Roseanne sitcom.  In season one episode 11, Jackie called DJ "Pumpkinbutt" and I loved it.  My son has been called Pumpkinbutt for the entire run of this blog, since 2005. 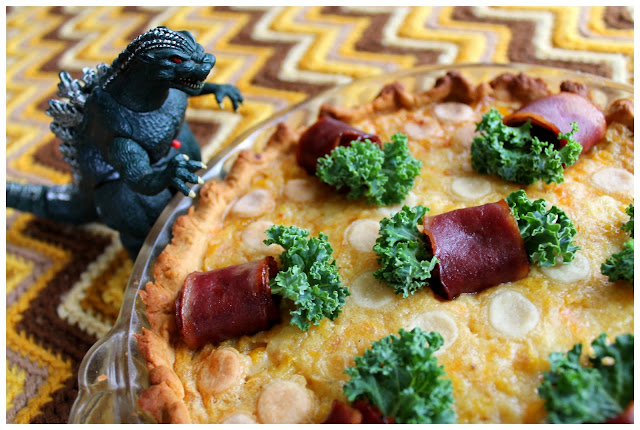 Once the news hit that the show was going to have a reboot I was so excited and also a bit nervous.  I love that show and didn't want the return to just be a watered down parody of the former characters. As I was eagerly awaiting the return, plans had to be made.  We don't watch TV, per se. We own a TV but it can go months without even being turned on.  We don't have cable, netflicks, or even a converter antennae, much less any of the other 'bingey' mind numbing stuff out there.  We watch DVDs when we do watch something.  So arrangements had to be made to marvel at a real modern functioning TV.  I also had to make a Roseanne inspired dish to celebrate.  As many fans know, during the first season corn was mentioned in every episode.  I decided to make a vintage recipe, Thimble Corn Pie! To Roseanne-up my photos, I used a knitted throw that is exactly like the one on Dan and Roseanne's bed along with the classic Godzilla toy always seen on the console table behind the couch.

Thimble Corn Pie is called this because you use a thimble to make the tiny pie crust dots on the top.  I used my one and only vintage The Magic Garden Beauty Salon thimble.  The ingredients all are normal items: cheese, eggs, milk, cracker crumbs..but it just didn't taste so great.  I think it's because I had forgotten I am not a big fan of creamed corn.  I hadn't had it since I was a kid and thought my more mature tastes would appreciate it in present day.  Mine didn't and neither did the fam's.  Well at least it still looked spectacular!

As for the new first two episodes of Roseanne that have aired I was not disappointed as I was with Thimble Corn Pie. I laughed, I cried, and I heard old references.  I had hoped for a corn reference but there wasn't one, sadly.  Maybe the writers had eaten a slice of Thimble Corn Pie before the scripts were done and decided corn was not to be messed with.

A Roseanne bonus:
I found Show Scripts for season 1-8 and season 10 thus far...why no season 9?  I know it was a bit bizarre at points but the series finale is one of the best in history!


5/30/2018 Disclaimer:  Because of recent unpleasantness involving a member of the cast, I wanted to make it clear that I am a fan of the original show Roseanne.  I do not approve or endorse what people say, do, or believe in their personal lives that involves negativity and hate.
Posted by my house is cuter than yours at 3/29/2018 No comments: 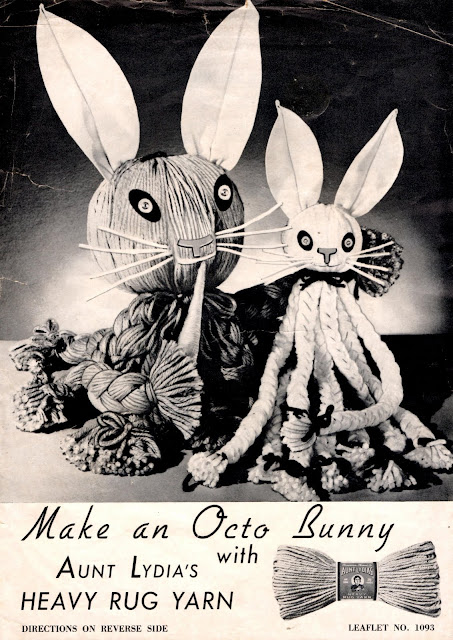 Vintage Easter Crafting at it's tackiest!


Maybe craft up one of these odd fellows for someone's Easter basket this year, after all it's April Fool's Day too! 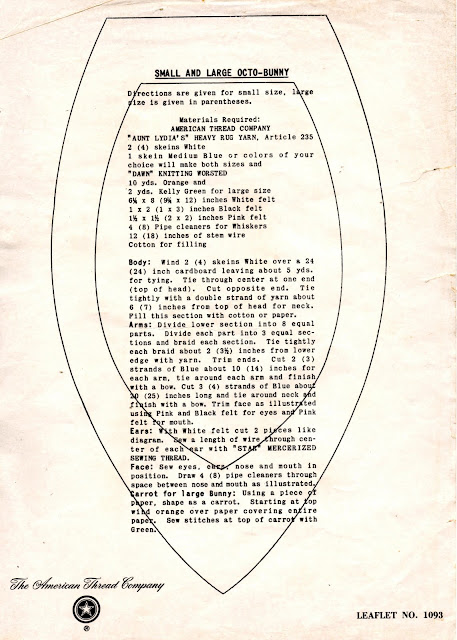 Rotten eggs of Easter posts past: 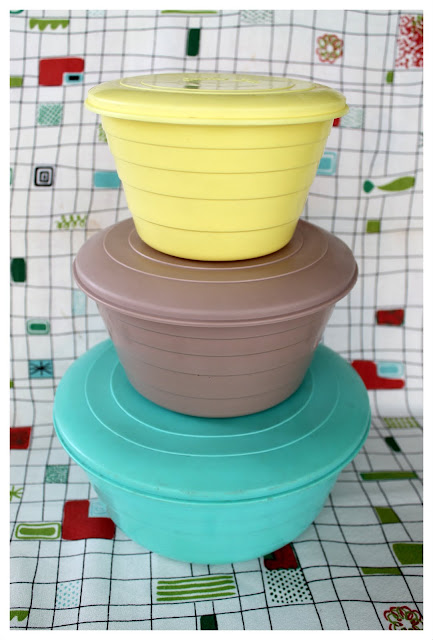 I found these tupperware-ish plastic storage bowls at an estate sale (5 bucks for the set). 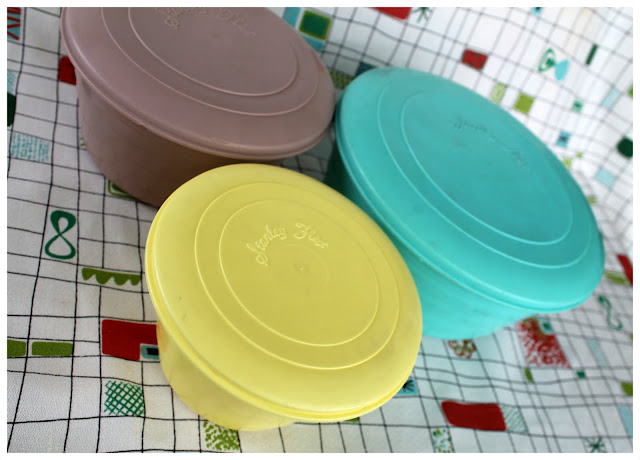 The lids say "Stanley Flex" however, I couldn't find any information about the company.
I love the color combination together.  The yellow and brown bowl nest inside the teal one making them easy to store in a smaller space.

Just another one of my favorite things from around the house! 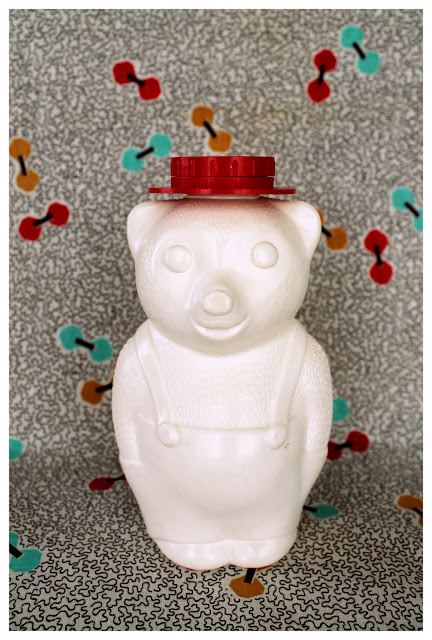 I came across this adorable vintage plastic bear at an estate sale.  His top hat has a twisty top exposing a small opening that a straw would fit well into.  I just love cute crap like this. 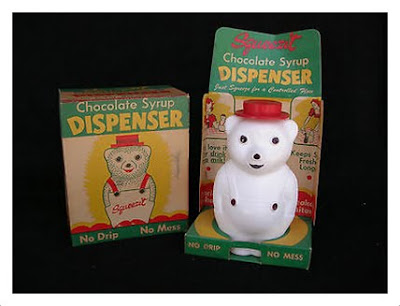 I did a bit of online searching and came across this image showing that Squeezit (a very unfortunate name) bear was originally a chocolate syrup dispenser.
"No drip...No mess."
"Made from polyethylene, the new wonder plastic"
Posted by my house is cuter than yours at 3/20/2018 No comments: 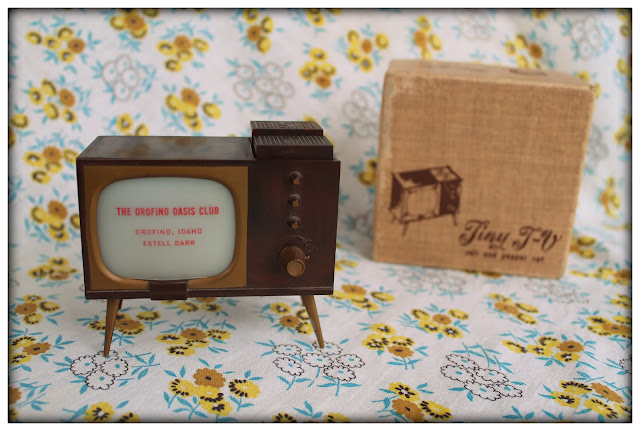 As I was talking about in the last post, adorable old salt and pepper sets, Mr. Husband Sir surprised me with this amazing Tiny T-V as a gift recently! 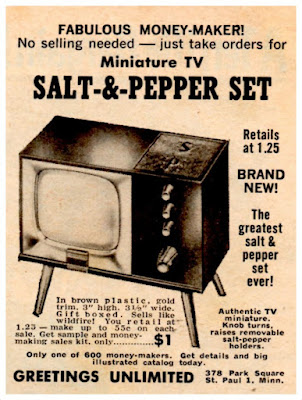 I had first seen it advertised in "Workbasket June 1957".
You turn the knob to have the shakers raise up.  The TV area is also a picture frame!
Mine came with a removable promo for "Orofino Oasis Club" in Orofino, Idaho, Estell Darr : Table Top Dancer.  Your Free gift with purchase of 5 lap dances. One of my favorite things to do is read old magazines from the 1940-50 time period.  I was reading through "The Workbasket", a publication for "Home and Needlecraft for Pleasure and Profit" recently.  I don't have but a small stack of these because I don't knit, crochet, or "make r d of 20 ds".  There are a few other non-yarn articles on gardening, tips for repurposing (Worn out chenille robes or bedspreads can be used to make dust and polishing mitts), and recipes (Beef Ball Ramekins).  The bulk of the tiny magazine is full of ads.  Ads for "Accordion Prices Smashed! Hurry ! Get in on these sensational accordion values." Or the highly suspicious "Your old fur coat into New Cape! Send no money, just your old fur."
There are tons of ads for "making money in your spare time". You can train to be a beauty consultant by mail order or simply wear Fashion Frocks to sell to your friends.  Or there is the "600 ways you can earn extra cash without selling effort!  No experience needed!  Make big money with Salt n' Pepper sets, America's greatest craze!" 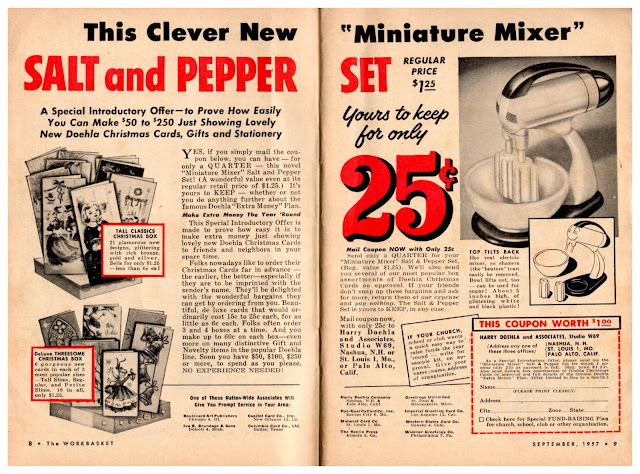 I came across this 1957 ad for selling greeting cards but was obviously drawn to the adorable Miniature Mixer salt and pepper set.  It is an exact replica of my 1951 Sunbeam Mix Master.  After a short search on ebay I came across an actual set with the original box even (9.99)!  On further inspection through other edtions of my "Workbasket" magazines, I noticed several more super cute salt and pepper sets: frying pans, coffee pots, telephone, toaster....  I can't let the "craze" hit me too hard, I don't have room for all of these mini seasoning apparatuses.  They aren't functional even.  The blender holds about 4 pinches of grounds in each beater along with having tiny shaker holes.   They are purely for adorable dust collecting.
Posted by my house is cuter than yours at 3/13/2018 2 comments: 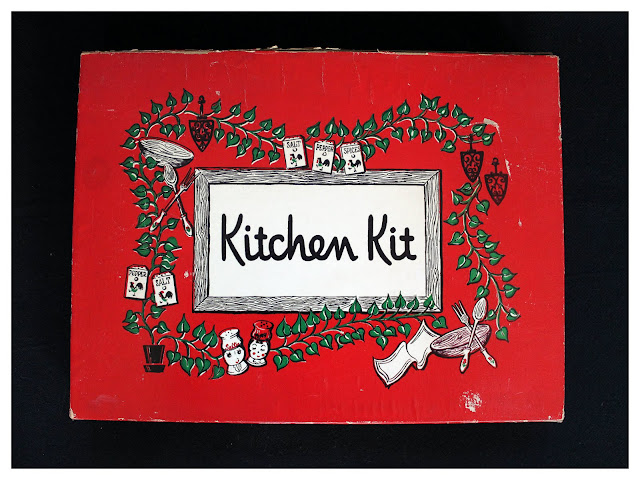 I picked up this vintage hostess gift box at a thrift store a couple of years back. 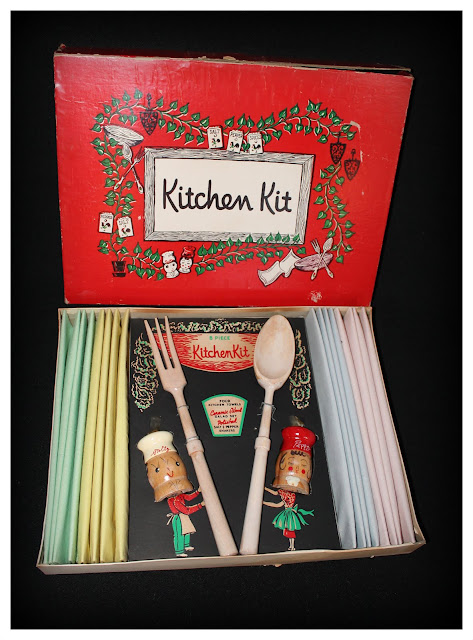 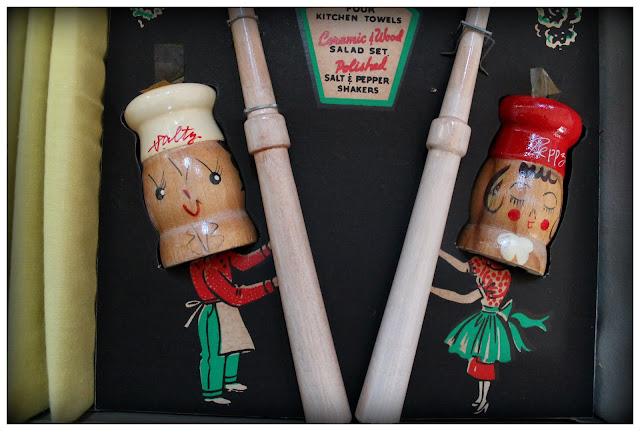 I comes with four folded napkins and a set of wood salad tongs, but
the best is the illustrated big headed salt and pepper peoples! 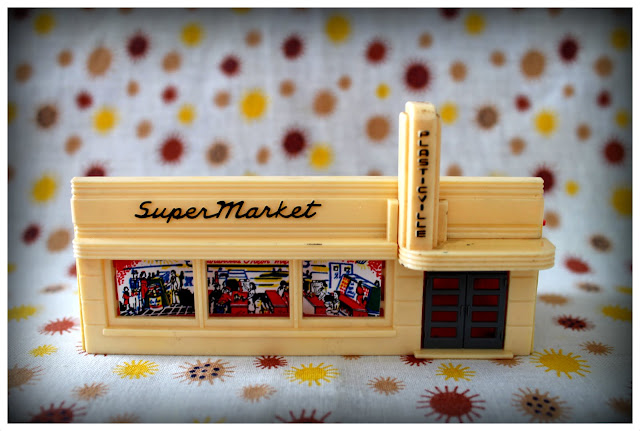 A tiny doo dad from my house:
This adorable vintage Super Market can fit across my hand!  It is a vintage building for a train set.
If there are any 'Clean up on aisle 4" situations it can be mopped up with a quarter piece of a sheet of toilet paper.

Since I collect old food packaging I am going to display the mini mart along side them in my kitchen...maybe I'll also include some green stamps (scroll down to "Marketing Day"). 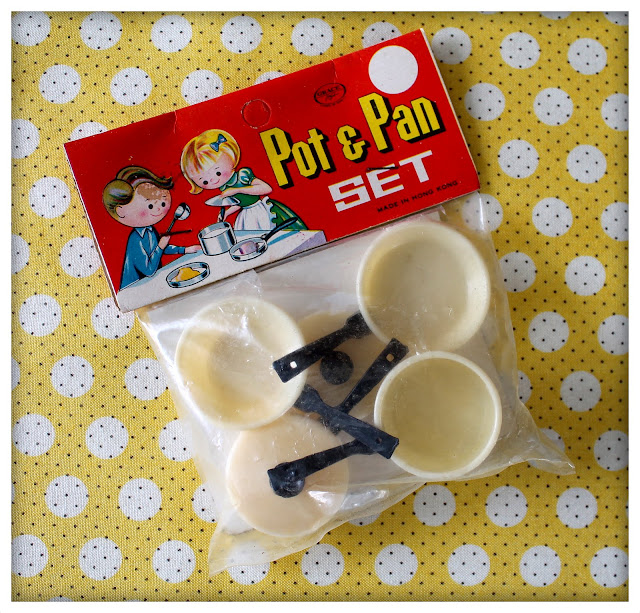 I happen to stumble across these super cute toy itty bitty pots and pans on ebay for 3 bucks (plus shipping). 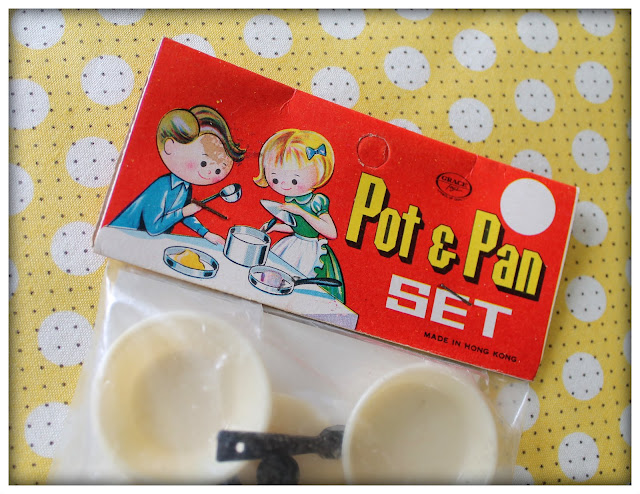 The graphics are so stinky cute.  I am a bit concerned about the boy and his extremely stiff pan handle holding hand though.  It's like he is the Edward Scissorhands of cookware.  Pots, pans, and measuring cups sprout out as fingers!  He is Freddie Frypanfingers!

These little 5 and dime toys are exactly what inspired the look of my retro art hanging,
Deluxe Dining Doo Dads!
Posted by my house is cuter than yours at 3/01/2018 No comments: