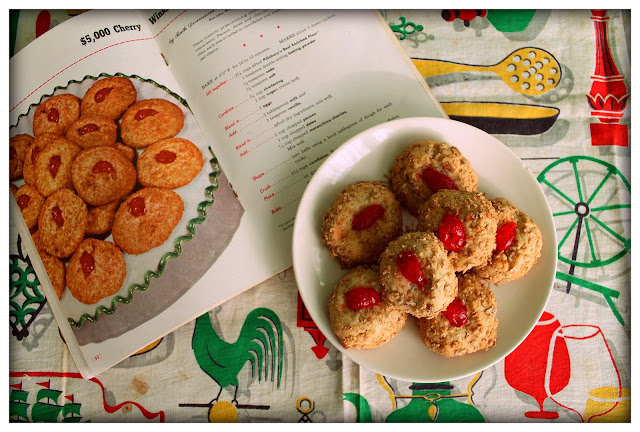 5,000 dollar cookies!
The recipe makes 5 dozen cookies so if you make these for a bake sale they will run your customers about 83 dollars a piece.  These Cherry Winks were the 1st prize winner in the Junior division of the 1950 2nd Pillsbury Grand National Recipe and Baking contest. 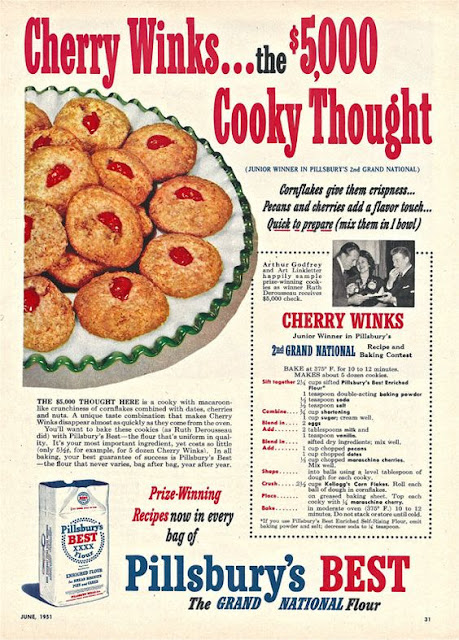 The cookie dough has chopped pecans, cherries, and dates inside then it's rolled in crushed cornflakes with a cherry wink on top added before baking.  When I made mine I did my regular MO of omitting and substituting.  I left out the dates and used chopped almonds instead.  I also didn't have official cornflakes, but used my walmart brand Special K Red Berries cereal flakes.  I just picked out and tossed the dried strawberries back in the box.  I am a ''use what you've got" kinda gal.  The cookies turned out really yummy.  I think if I made them again I would use almond extract rather than the recommended vanilla.  I love almond extract far more than plain old vanilla so I don't know why I followed the extract rules on this recipe.  A little almond extract makes every baked dessert better.  It's one of my "secret ingredients". 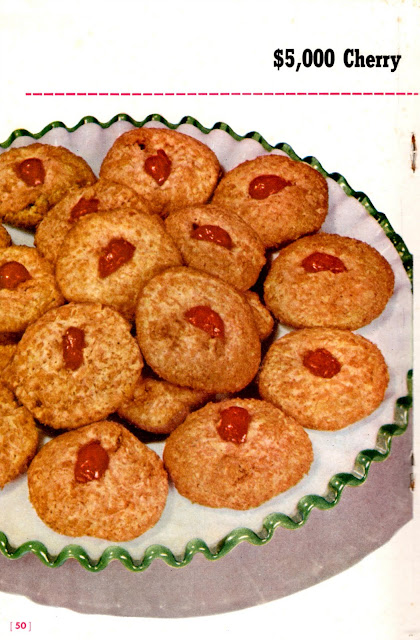 I LOVE the Pillsbury Bake Off Cook booklets and have collected nearly all of the first 20 printed.  The contestants always have such imaginative ideas and titles for their dishes.  Cherry Winks, rolled in cornflakes and winking up at you with a sliver of cherry!  So cute and fun! 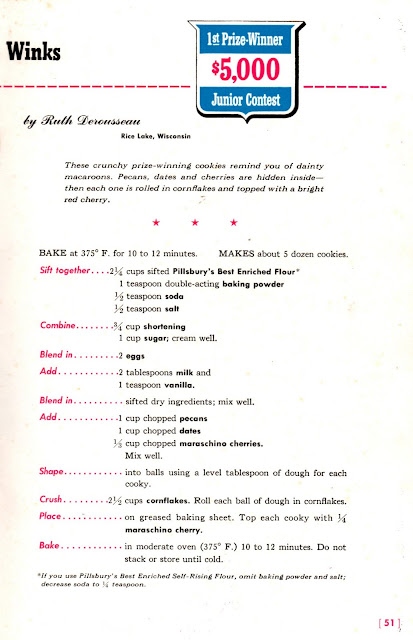 So, drum roll please! A super big deal to me... I entered the Pillsbury Bake Off this year! 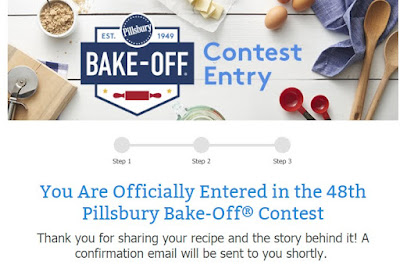 The winners won't be told until the beginning of the new year.  I don't think I can reveal much about my recipes at this time.  I checked that mandatory box saying I read all the rules and really didn't.  I imagine it says somewhere in there that if you talk about the dishes you submitted before the winners are announced the Pillsbury doughboy thugs will come break your kneecaps with a very sturdy bread stick.  I will say that I submitted two recipes (breakfast and dessert) and think they are worthy of winning.  I doubt I will but I am so thrilled to be a part of something that started in 1949 which still to this day showcases inventiveness and even a bit quirky concoctions. 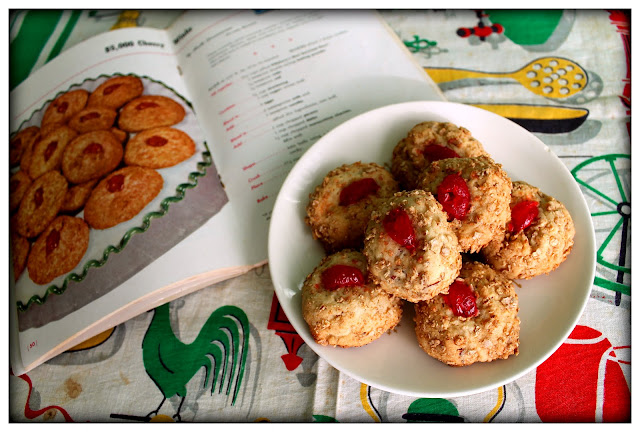 Here are a few more recipes from Pillsbury Bake Off past that I have made: 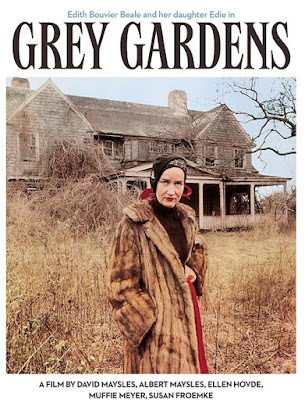 Grey Gardens came out over forty years go (the same as myself!) and I just happened to stumble upon it about a year ago.  For the one or two others out there that don't know about Grey Gardens, it's a documentary filmed in a "home video" kinda way showcasing an eccentric artistic mother and daughter who live in their decaying East Hampton New York 26 room mansion along with over 20 cats and wild raccoons.  Before the stock market crash of 1929 the Beale women were lavished with furs, servants, and a beautiful landscaped home.  After the crash and Mother Edie's divorce they had nothing but the house which fell into such disrepair the city was called in to condemn and evict them (commonly known as "the Raid").  In stepped (and the major reason there is such interest in this story) cousin Jacqueline  Kennedy Onassis to save the family name and fund getting the home back to a state of human occupancy.  That is the back story.  The documentary takes place a few years after the raid and is basically the Beale women spatting, singing, and entertaining us just being themselves.  Little Edie has a nack for pulling together "costumes" using skirts as capes and long sleeve shirts as turbans...just top it off with a decorative brooch!  She also sees herself as a great dancer and singer who has been held back by having to take care of Mother Darling, which is the root of most of the arguments.  Within their bickering there are little bits of their past brought up but never fully fleshed out.  That's one of my favorite parts is trying to piece together their story.  In 2009 Grey Gardens was turned into a HBO feature movie for the purpose of weaving all of these little bits together.
In 2006 the unreleased and edited footage from the first documentary was released as a follow up, The Beales of Grey Gardens.  There is also even Grey Gardens The Musical.

Every Halloween I have to come up with a solo costume for me to wear to an adult event that Mr. Husband Sir helps host every year.  He is a part of a local horror host television show where he plays the role of an inept Mexican wrestler who is manservant to a devil...not the devil, just one of the many Beelzebubs it takes to make the world go 'round.  So MHS has a "costume" he has to wear at the live performance hosting.  I get to be and wear what ever I want!  I was sooo excited this year to choose to be Little Edie Beale from Grey Gardens! 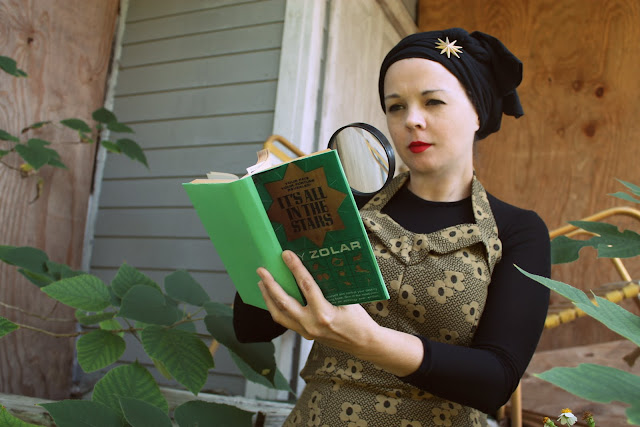 "The Libra husband is reasonable.  He is a born judge and no other zodiacal type can order his life with so much wisdom.  God!  That's all I need: Order!  That's all I need.  An ordered life.  You know, a manager.  But he's got to be a Libran." 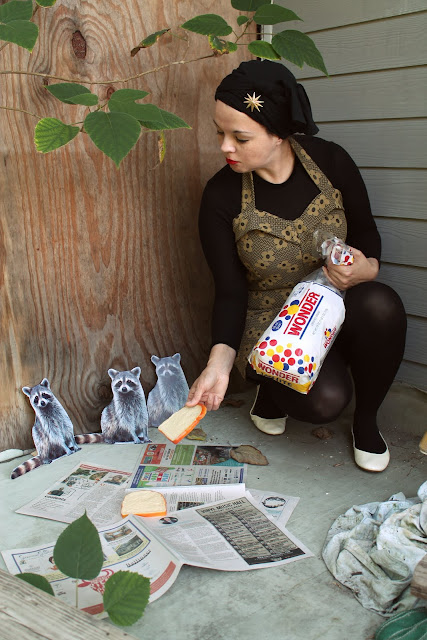 "Course I'm mad about animals, but raccoons and cats become a little bit boring.  I mean, for too long a time." 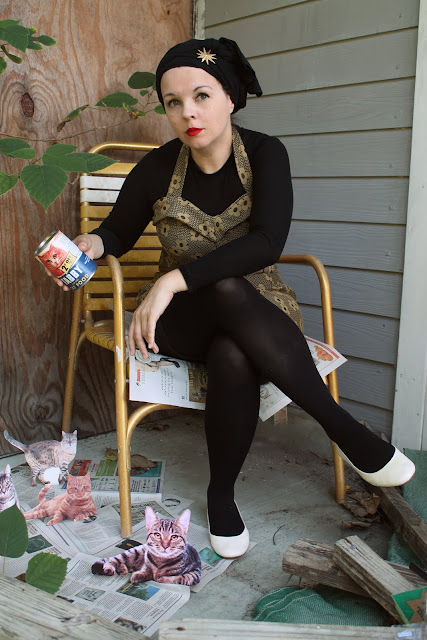 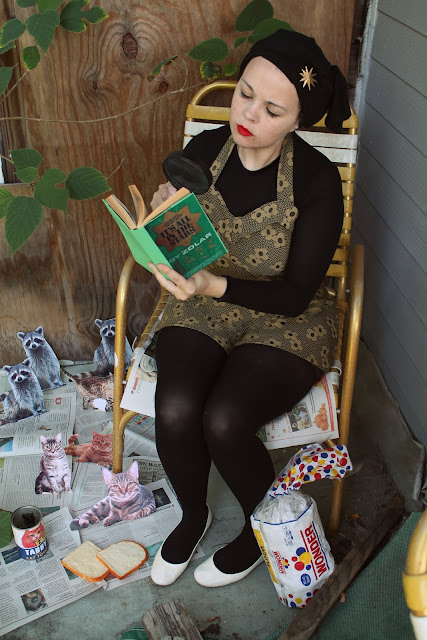 "We better check on Mother and the cats.  She's a lot of fun, I hope she doesn't die. " 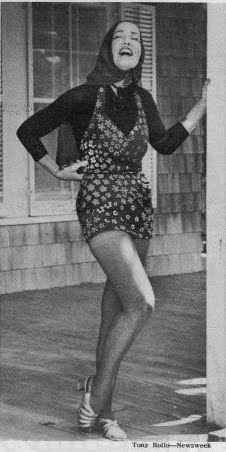 Here is a photo of Little Edie in her infamous flowery swimsuit, long sleeve shirt, and scarf. 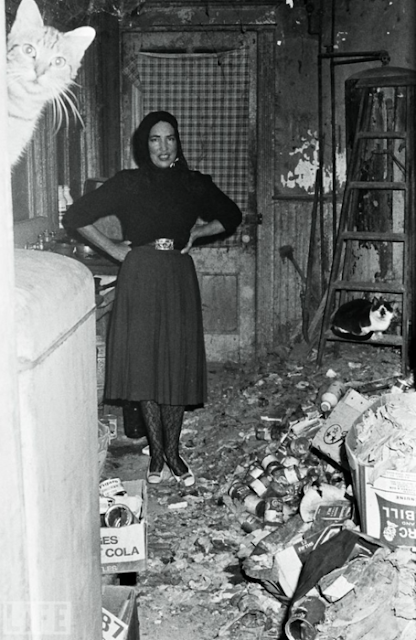 Little Edie among the cats, garbage, and the dilapidated run-down inside of the mansion.  Apparently Big Edie didn't believe in cat litter so you can imagine the smell of this photo. 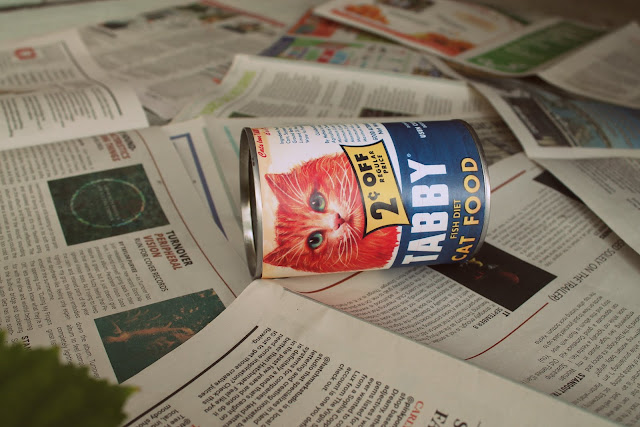 To pull my "costume" together, it started when I happened to find some 70s flowery fabric at a thrift store that reminded me of Little Edie's swim suit.  I then used Patterns by Gertie, Butterick B6354 , the shorts and the top, which I sewed together to make a one piece suit.  I then put on a pair of black stockings, white shoes, and wrapped a long sleeve t shirt on my head and finished it off with a kicky pin.  I made the props from printing images from the nets of the front cover of Little Edie's astrology book, cats, raccoons, and cat food can labels.  I then covered everything in newspaper as she always did to make a clean surface.  I took the photos at an old overgrown abandoned house in the older part of the city.

I admire the Beale women.  They worked with what they had and did it their way.  They liked being different and were very proud ("too sophisticated for Jerry"). Of course, I'm not down with letting a cat piss on the floor near my portrait.
Posted by my house is cuter than yours at 11/07/2017 No comments: