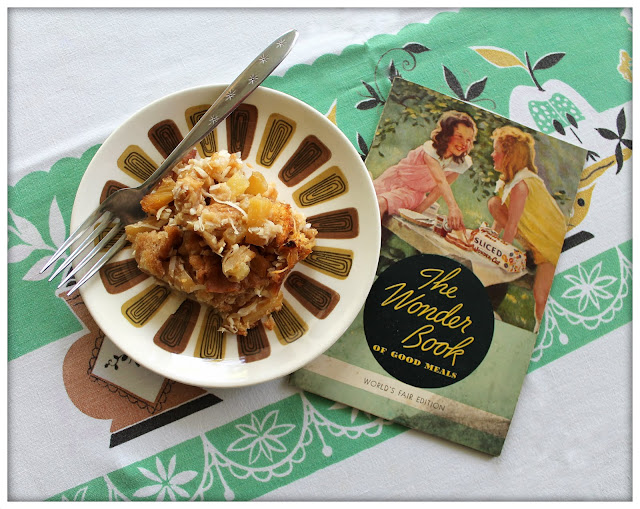 Last week as part of some summer fun PB and I made our way through an entire loaf of Wonder white bread.  We made fluffernutters (hot pressed and regular), wonder bread waffles, and my personal childhood favorite...balled up bread balls.  It's just what it sounds like, take a piece of soft white bread, ball it up tightly in your hand, then enjoy.

I also used 6 slices of bread to bake a dessert that came from the 1934 Wonder Bread at the Chicago World's Fair recipe booklet. 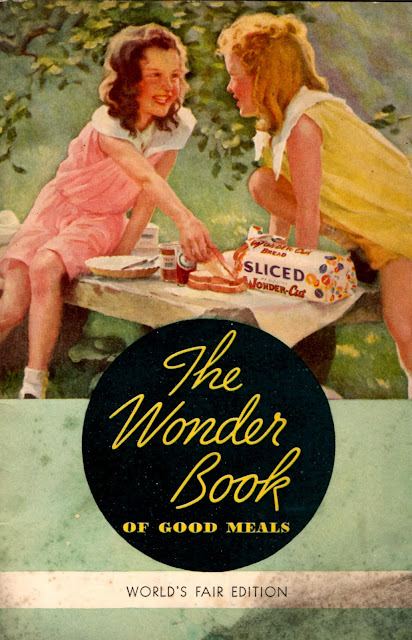 This little cook booklet has got a ton of intriguing recipes that involve using white bread as a primary ingredient.  Simple plain white bread becomes pudding, tortes, cakes, croquettes, stuffings, and pies.  It covers the "witchery" of sandwiches with such great tips as use two slices of bread when making a sandwich, and spread the filling to the edges.  There are hints on making sandwiches to "please a man's taste": Garnish with onion rings and sliced pickles, no man can resist such sandwiches. 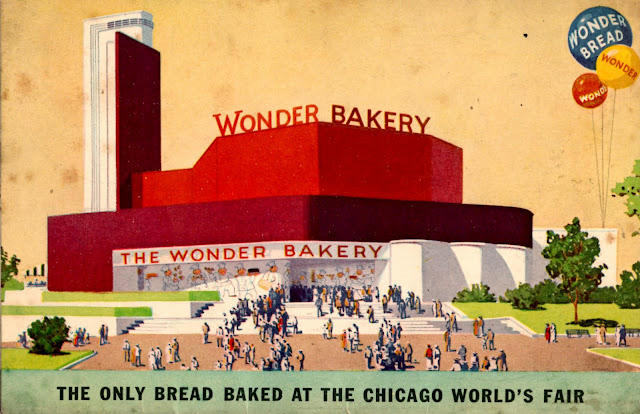 There are a bunch of recipes I want to try out that don't involve the man approved onion rings.  For now I went with a safe and simple dish, Cocoanut Fruit Betty:

You use 2 cups of drained "fruit".  It's your call!  However technically a tomato is a fruit, and I wouldn't suggest it.  I went with canned tidbit pineapple.  The juice drained from the can was just about 1 cup too!  It turned out pretty good and I would certainly make it again.  I generally don't have white bread in the house so I would try it next time with wheat bread.

So yes, for "summer fun" we ate white bread.  I hope when PB gets back to school this fall he isn't asked to write an essay about his summer activities having eating bread on the top of the list.

With that being said I have about a month of summer vacation left to top the joys of eating white bread with PB.  I'll certainly have my work cut out for me so I will be on blog hiatus till the school year gets rolling.  In the meantime, I suggest eating some two sliced, onion and pickles to the edge white bread sandwiches...or just a simple piece of toast works too!
Posted by my house is cuter than yours at 7/07/2017 2 comments: