Christmas Gifties: Stuff I Made

I was waiting till all the gifts were received before posting pic's but I've decided to just prewarn! I actually had to open some of the gifts to photograph them! So, Heather, If you are reading this, you might want to stop! 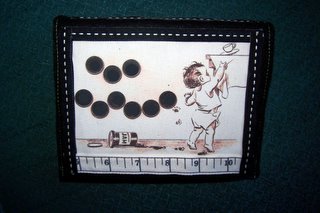 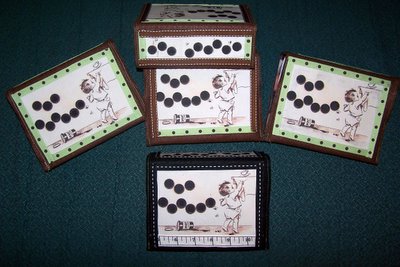 These are photo album covers I made for family. Here are all the boring details if you are interested:I made the jackets out of either brown or black felt stitched with lime green and cream thread. I found the image of the baby from a vintage baby book, then scanned it and did stuff to it in my paint program..Like cleaning it up and changing the color to a sepia tone. The dark circles seen are actually Pumkinbutt's name spelled out in those neat scrap book stickers that look like old typewriter keys, those were also scanned in (however, I blacked them out for this photo...You never know what identity stealing creeps might be out there!). Next I printed out the completed image on white t-shirt iron-on transfer paper and applied it to a cream colored canvas duck material. I attached this to the felt with fabric glue. Along the edges of the image I put grosgrain ribbon. On the brown covers I used a lime green with brown dots along with some that is brown with a cream stitching down the middle. On the black album I put a black ribbon that had an off-white stitching down the middle (just like what I used on this cigar box purse) along with some ribbon that looks like a measuring tape. I also did this whole process on the spines of the albums. 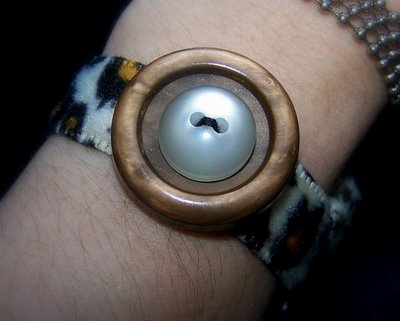 This is a wrist cuff type bracelet I made for heather. It has a velvety leopard print ribbon with 2 vintage buttons sewn on. 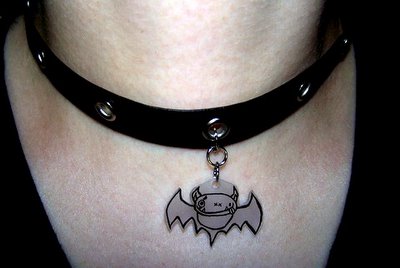 I made this choker for a gal I know that is really into Goth stuff. It is made from some pre-eyeletted (if that is even a word) ribbon that looks like leather. I made the charm from shrinky dink of an image that she has always liked. It is of a cute bat that is on a onesie of Pumkinbutt's from when he was a baby. I also made her boyfriend a matching wrist band out of the eyelet material. 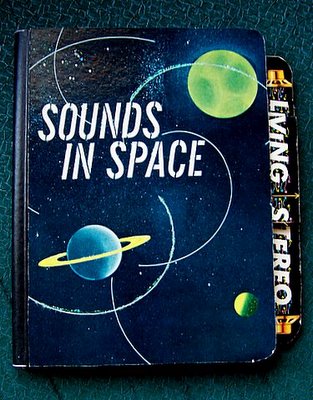 A tabbed revamped notebook. I made it from one of those non-spiral-ringed composition notebooks, a vintage record album cover and a little glitter. There are three tabs on the right side made from part of the cover.

These are Christmas ornaments that I made for family. 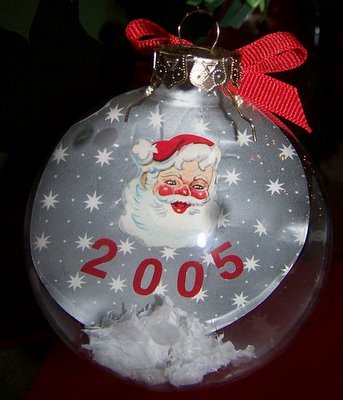 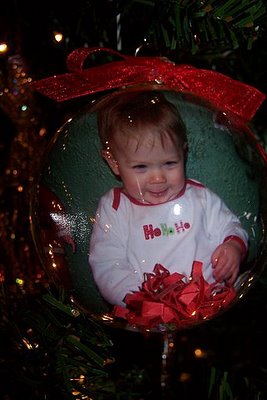 the ornaments are made from clear glass balls from Michael's. I then put a photo backed with a piece of festive paper,some fluffy stuff to rest on the bottom (fake snow or red paper crinkles), red vinyl number stickers for the year, and an actual vintage Christmas seal (seen on the back side). I also did some etched dots on some but they don't really show up in the pic's.
I also made a notebook for my step father and an earring and necklace set for my mom but forgot to take pic's...
Whew! These 2 posts have taken me 2 days to do! Thanks for reading!
Posted by my house is cuter than yours at 12/31/2005

That log book seriously rocks. How did you bind it? We need a tutorial! Several, actually.

The photo albums are really incredible, too! They must have taken so long to complete, but definitely worth the effort!

I love the ornaments...simple and totally cool!