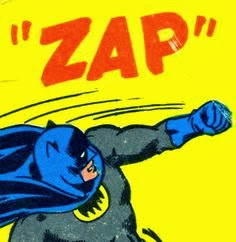 Introducing some of the party decor for PB's Vintage Comic Book birthday party! 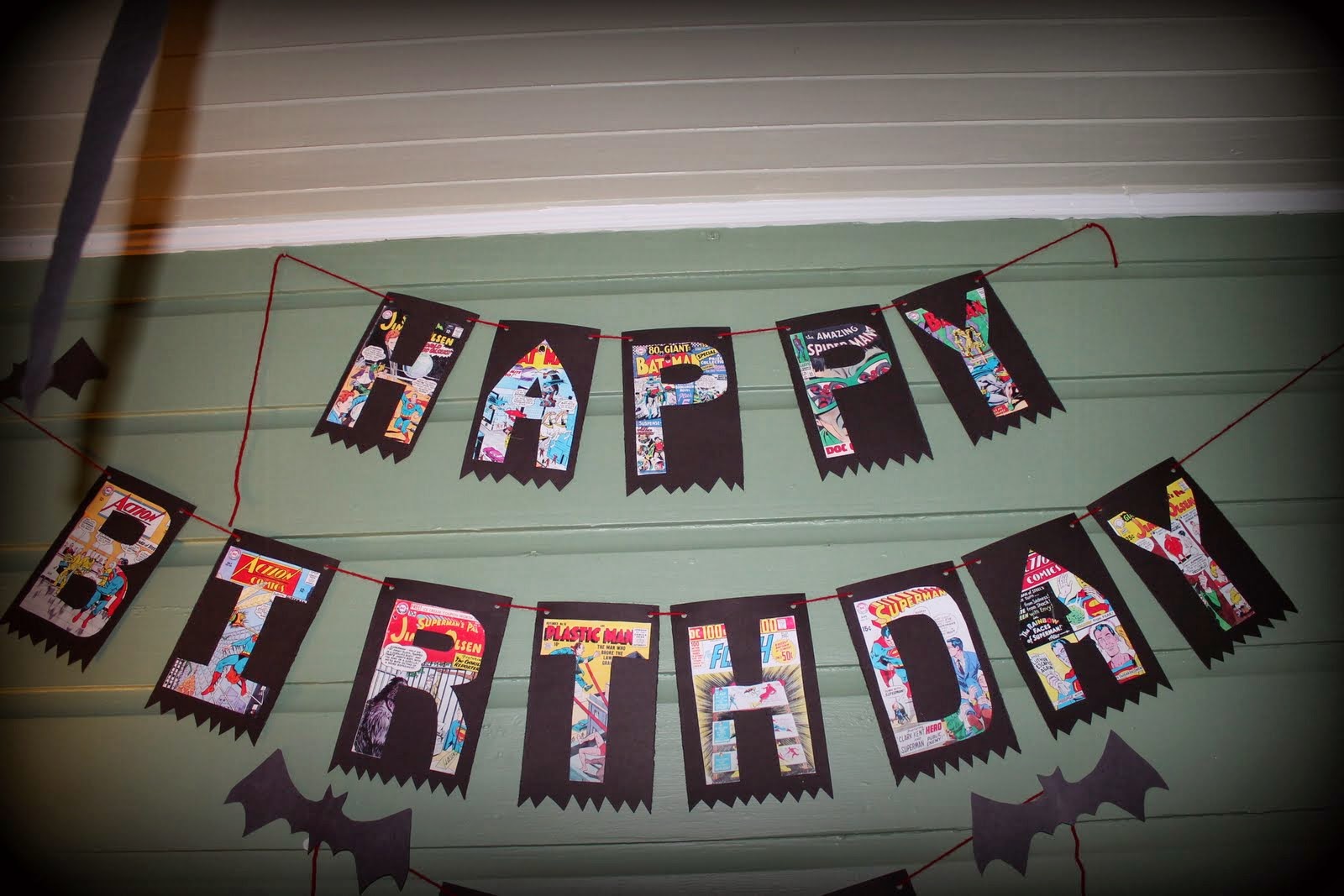 I made him a "Happy Birthday" banner out of black construction paper and color copies of covers of some of his vintage comics.  I freehand cut the letters out, glued them to the black paper and connected it all with red yarn.  Why the bats you may ask...stay tuned to this bat channel for more info! 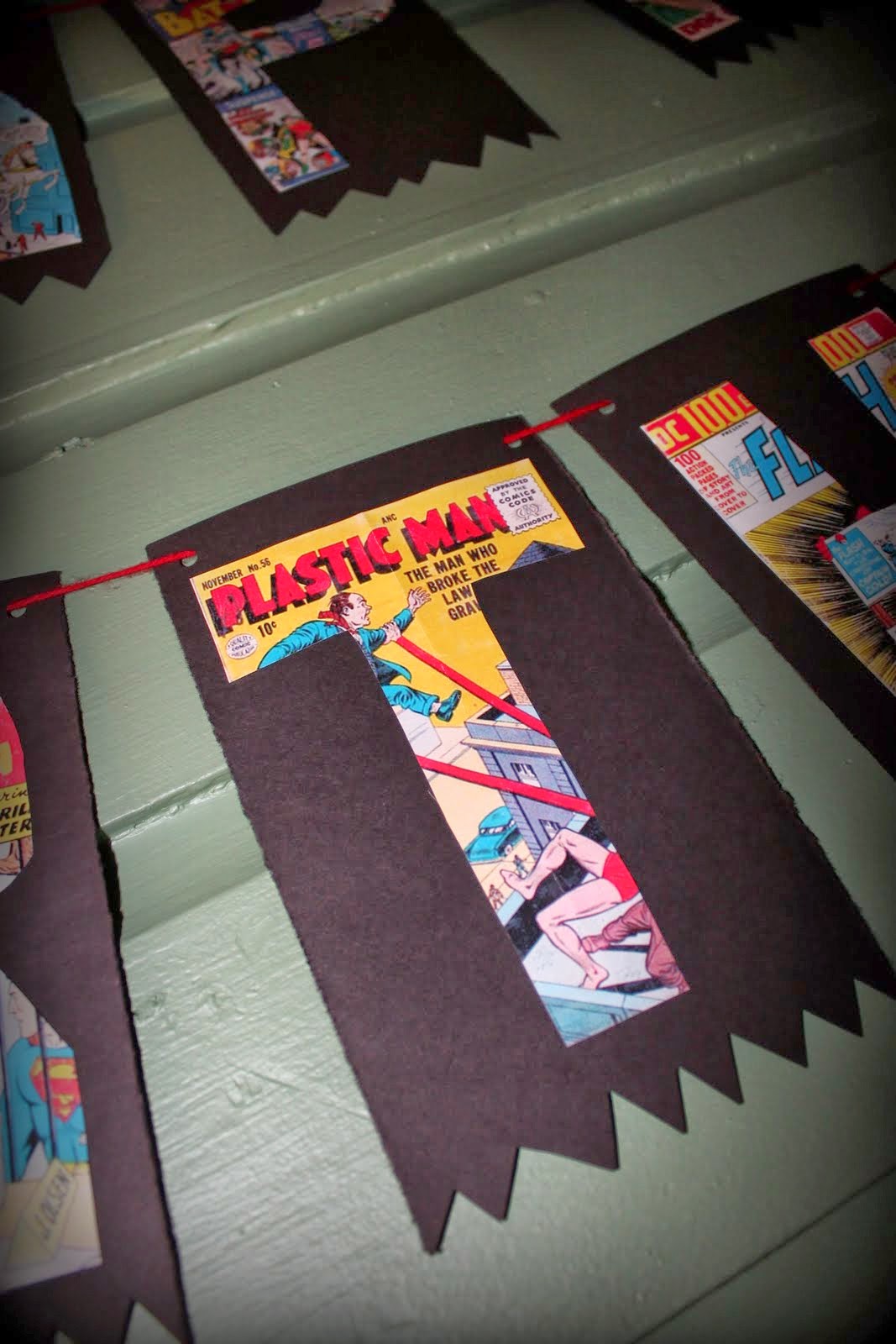 This is an image of the backdrop behind the snack table... 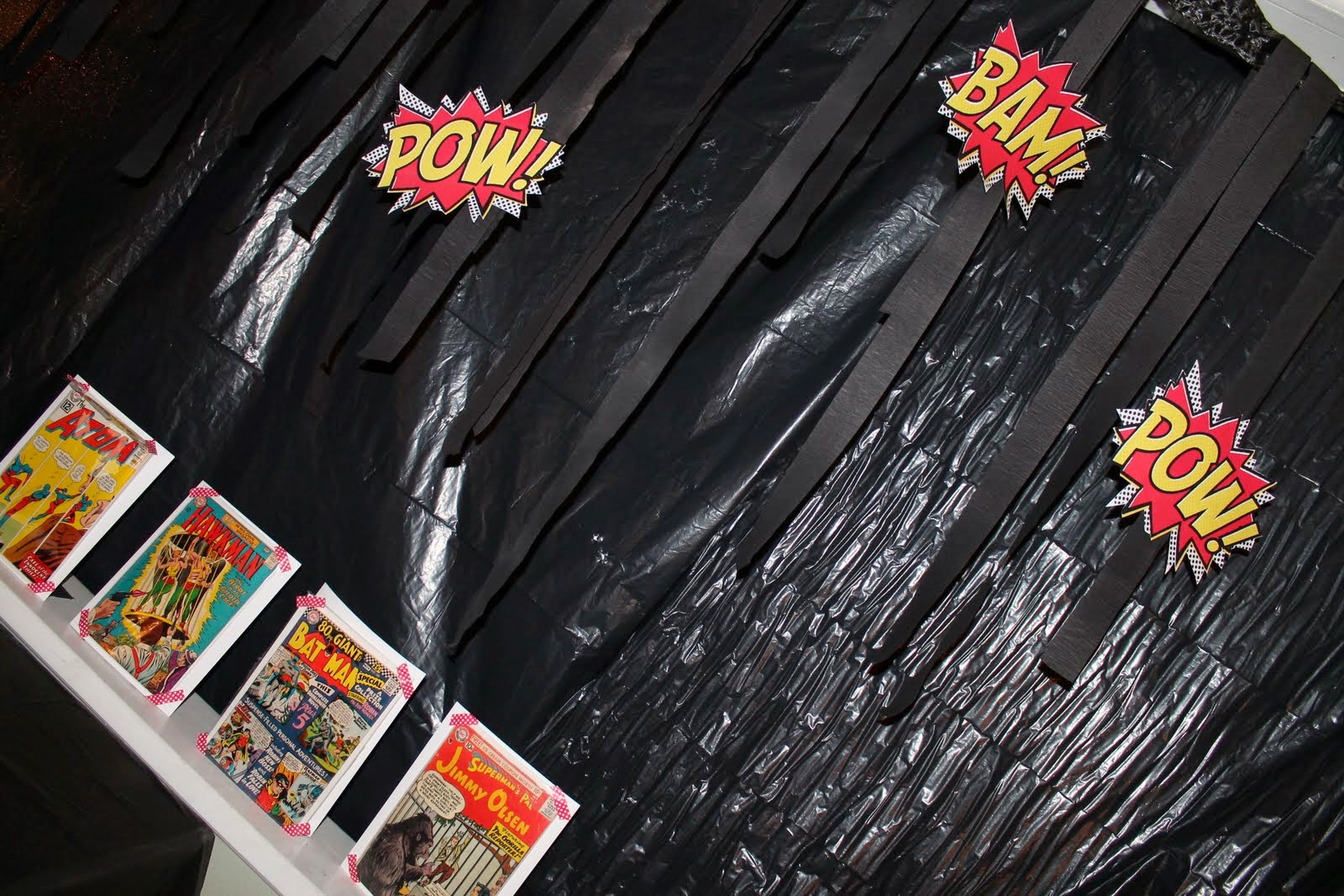 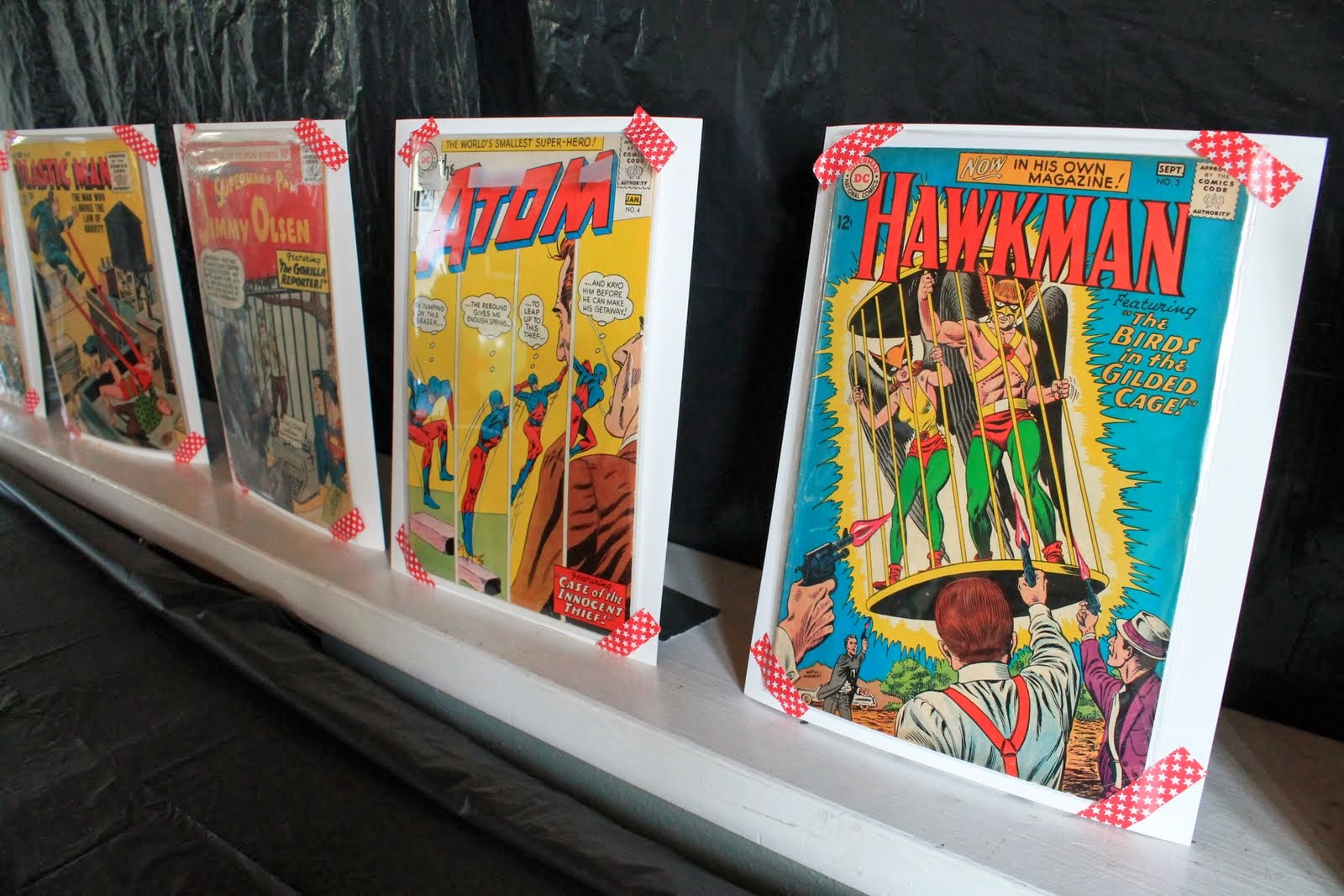 On the ledge we put out some of PB's vintage comics.

And now on to why the bats....
Holy Birthday Party Batman! 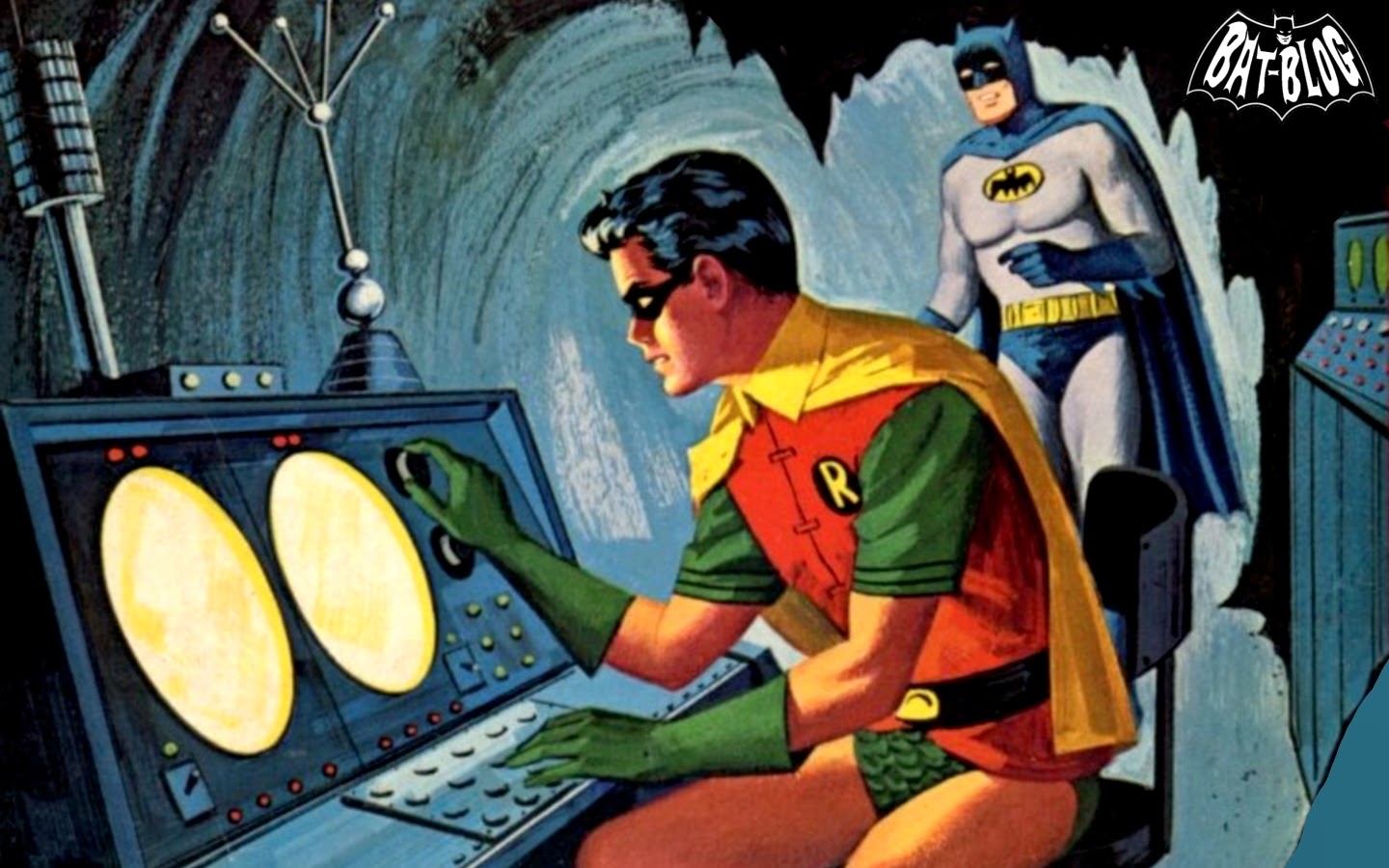 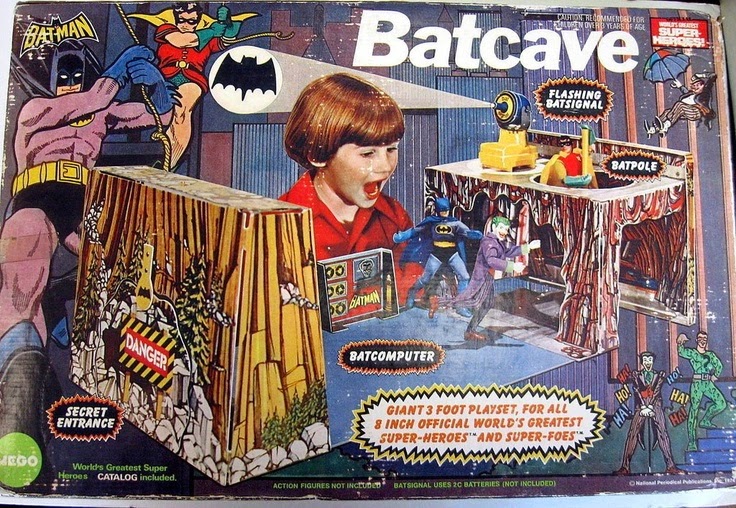 We were inspired in part by this vintage Bat Cave play set.

Inside the Bat Cave, which was through a secret cave entrance.....! 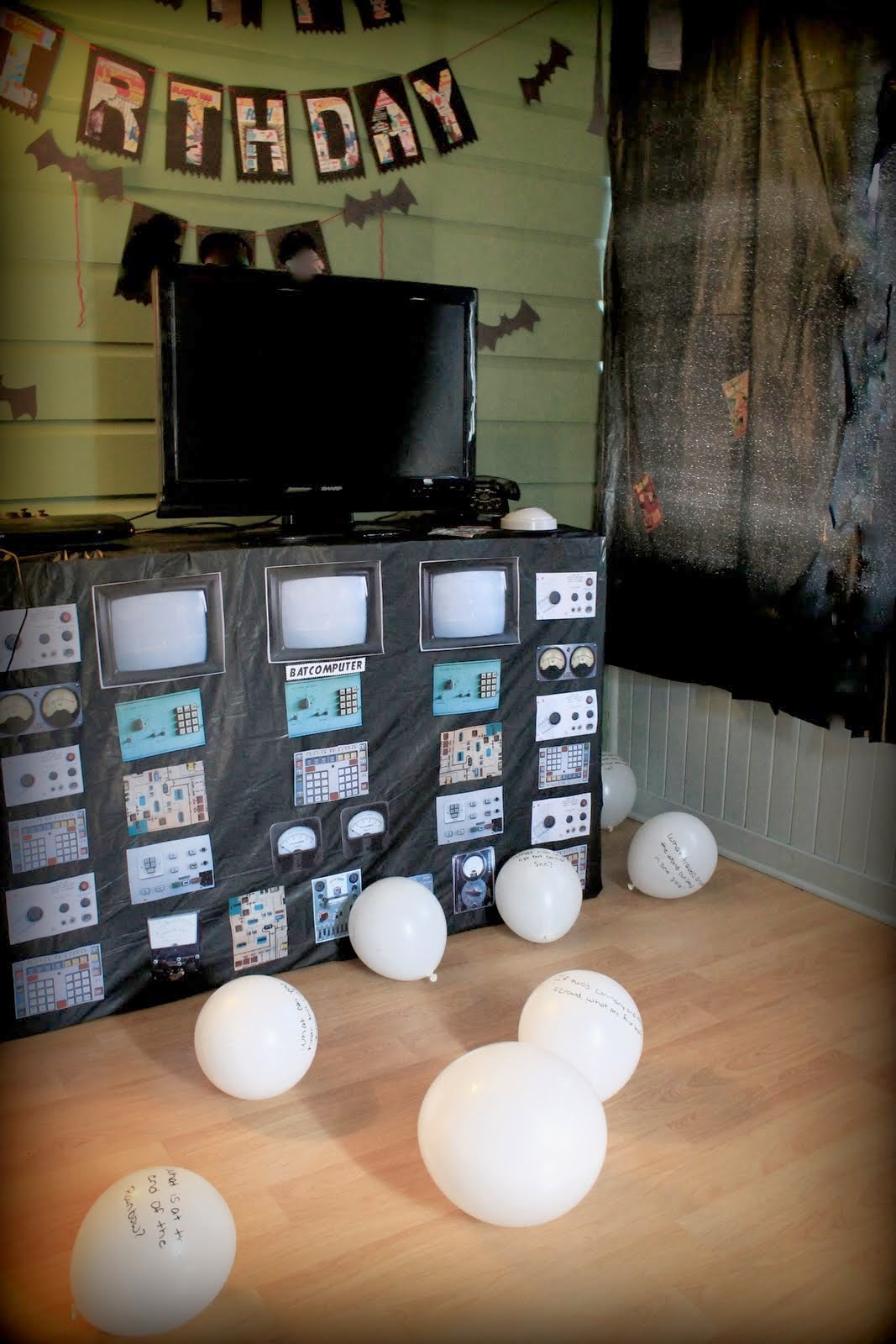 I covered the fronts of the sideboard and china cabinet in black plastic table clothes along with vintage computer looking parts, gauges, and dials to transform them into Bat Computers! 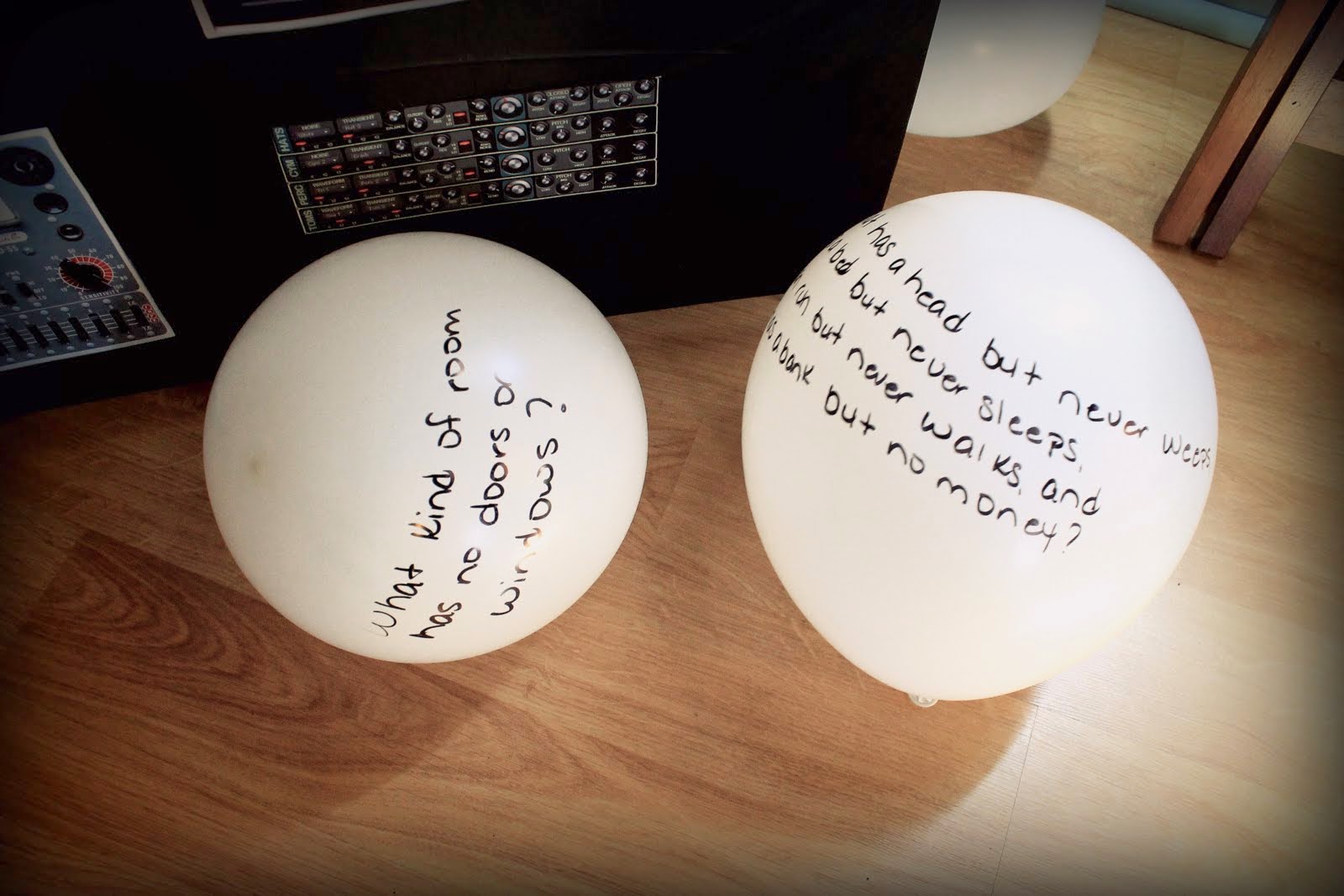 The Riddler had invaded the cave right before the kids went in to eat their snacks!  There were balloons with riddles written on the outside that they got to pop and inside on a small slip of paper were the answers.  This gave them something to do as each got their snacks. 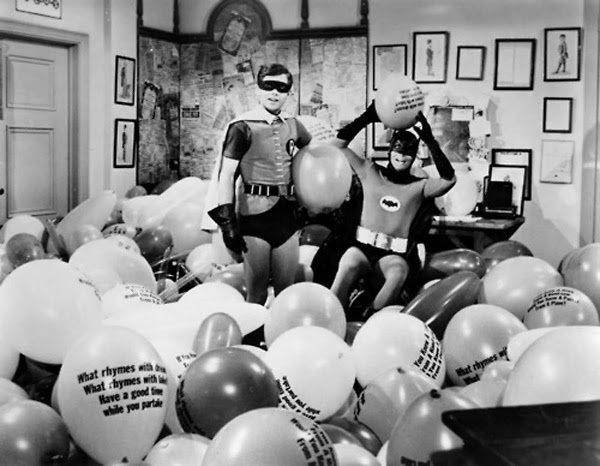 Another Bat Computer with displays of wanted villains! 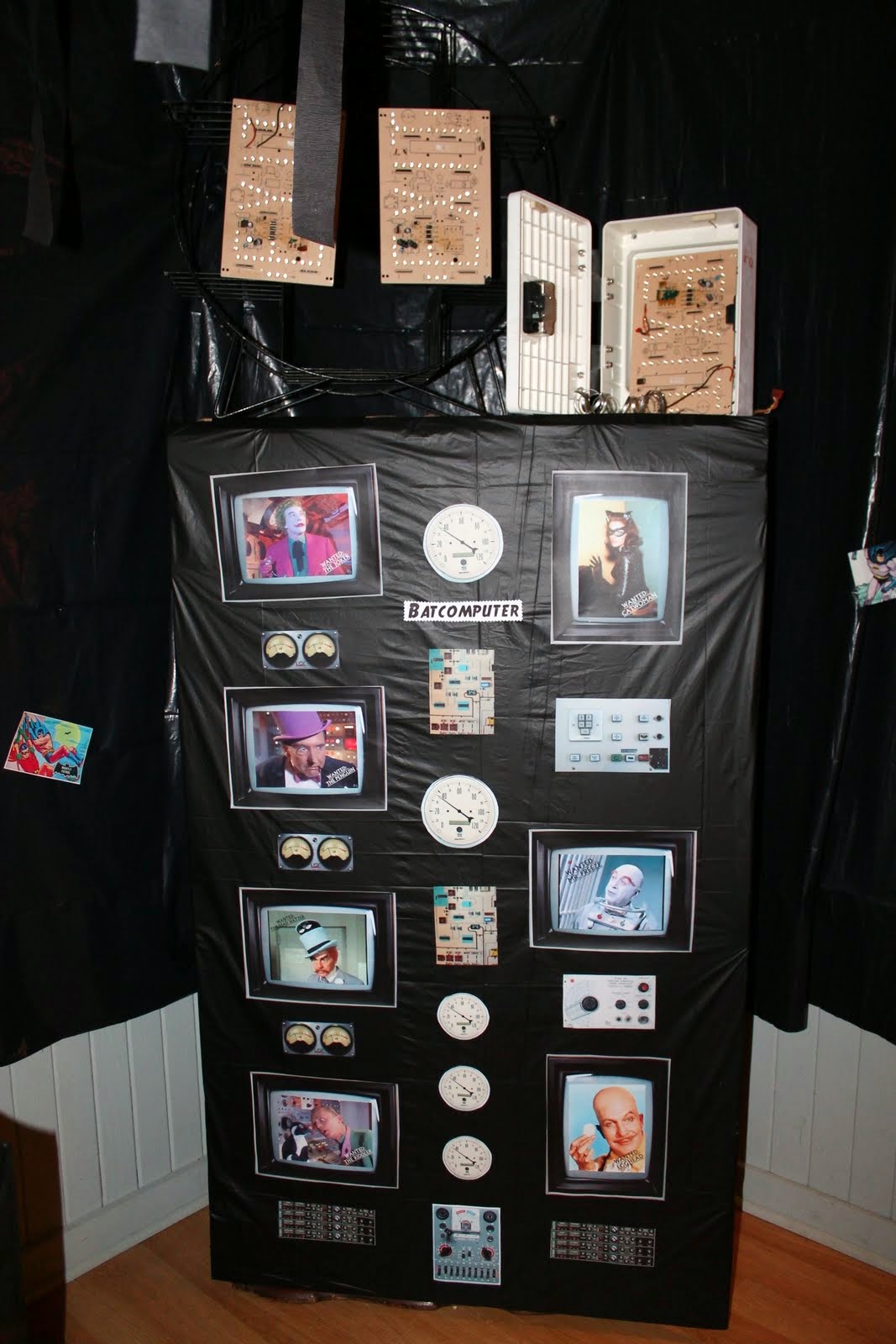 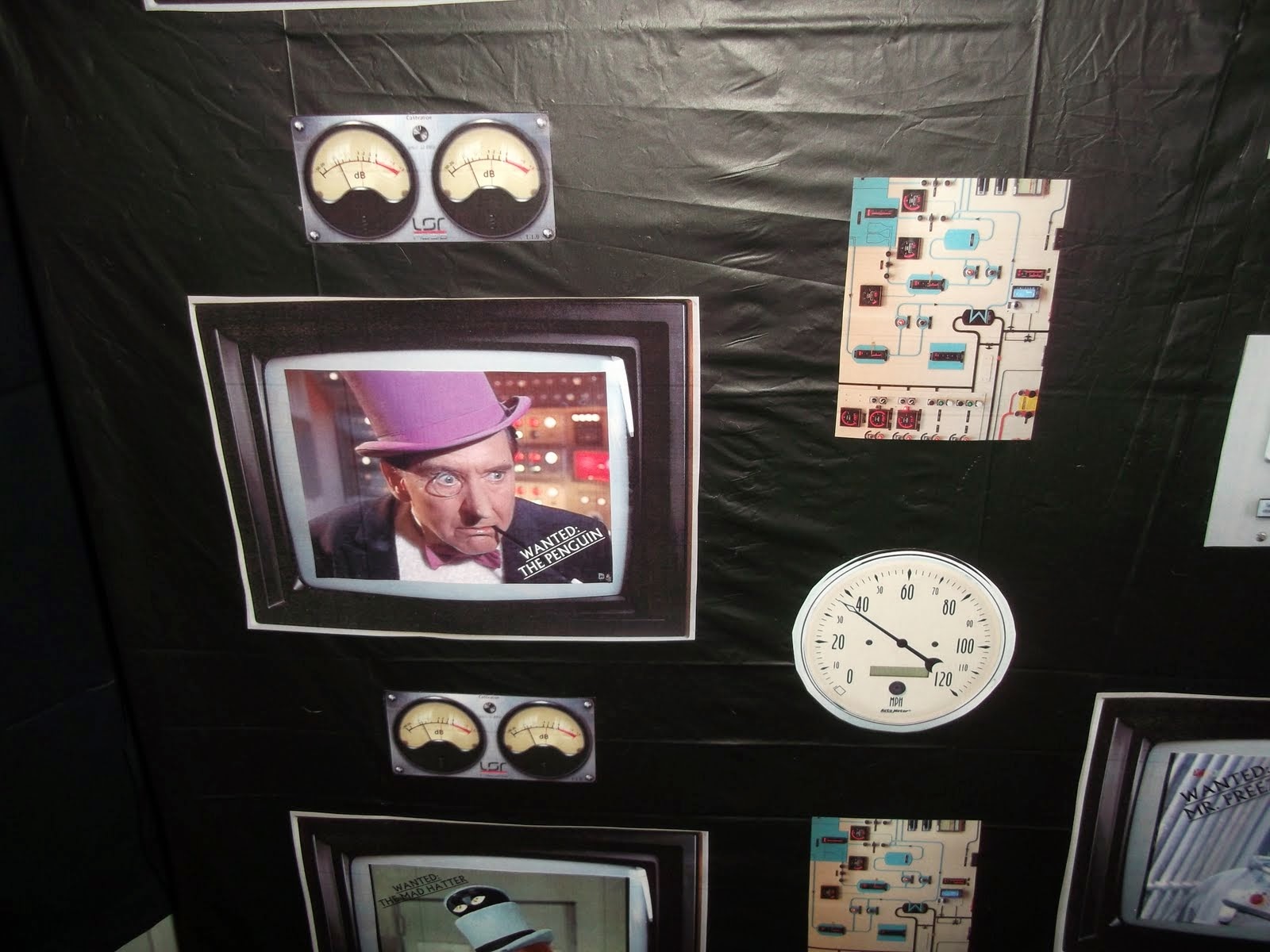 No Bat Cave is complete with out the Bat Signal Light or the Bat Phone! 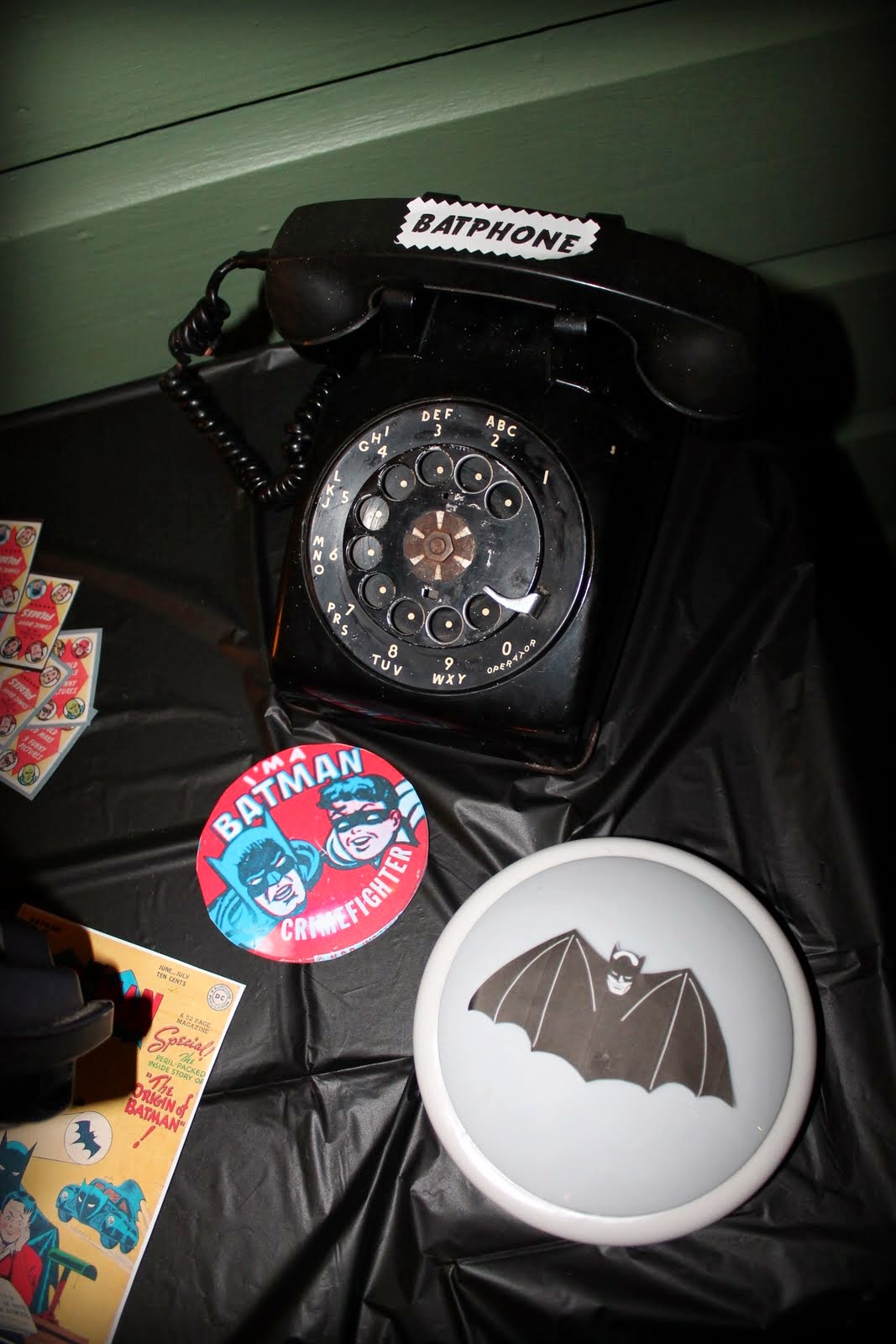 I attached print-outs of vintage Bat Man and Robin trading cards and images to the bat "walls". And when the Super Heros needed to use the restroom they went to the BATh ROOM. 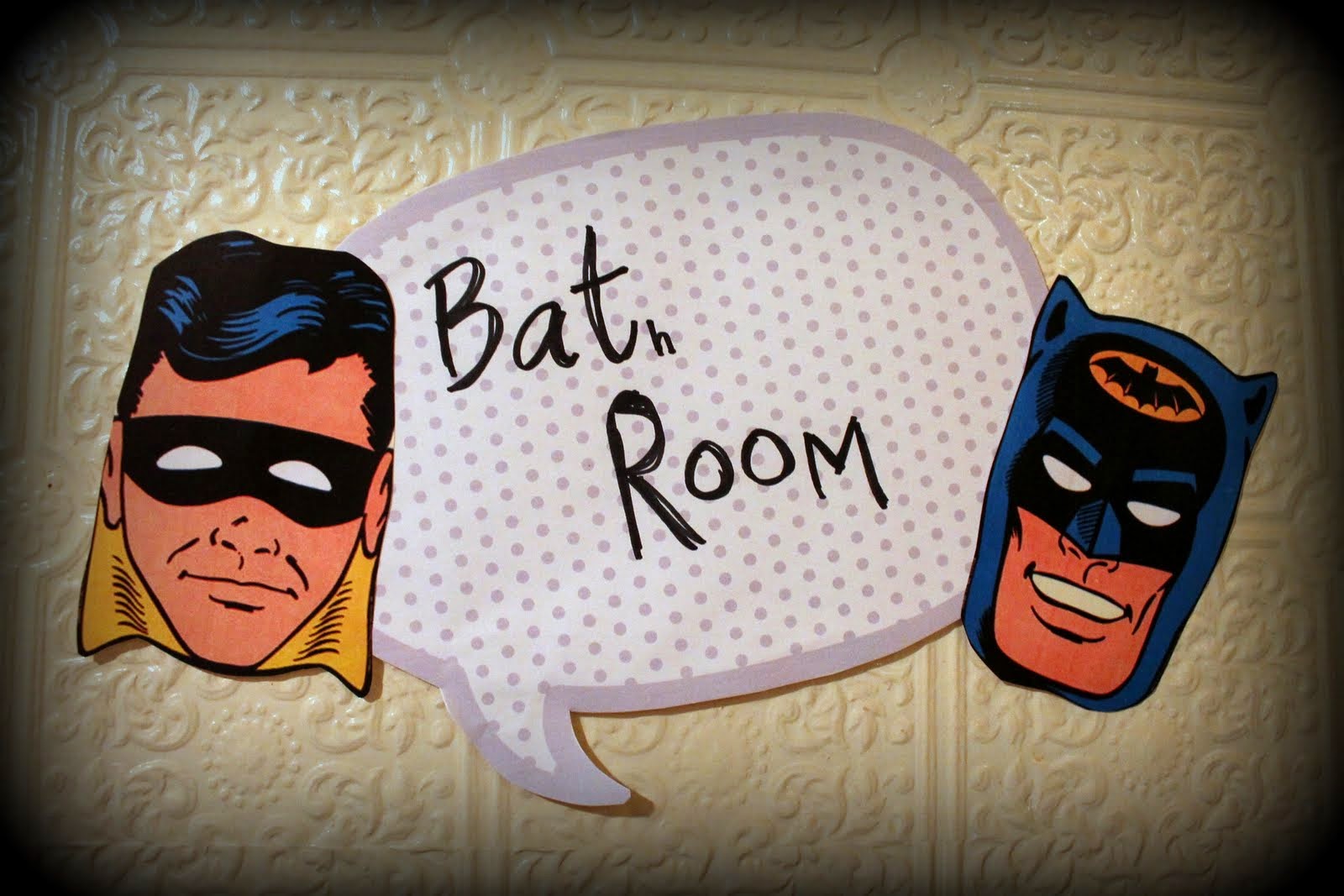 While in the Bat Cave, the Super Heros watched episodes of the 1950's Adventures of Superman on the monitor while replenishing after battling evil.  More on the snacks, cake, and evil in a later post! 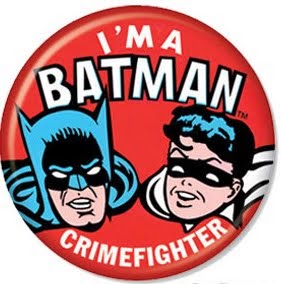 Don't forget alot of images for the party are on my Vintage Comic Book Party Pinterest page.