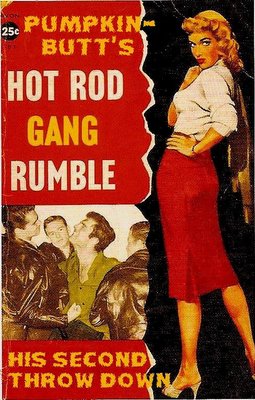 This past week was Pumpkinbutt's second birthday!! He had a classic car/ kustom hot rod themed party . He LOVES cars! Shown above is the cover of the invites I made. They actually had Pumkinbutt's real name on them, but for identity protection I changed it for your viewing pleasure. I scanned an image of an old pulp novel, cleaned up the image best I could, then added his name and the 'second throw down' part. I used my piece o' shit paint program....One of these days I WILL get Photoshop.... 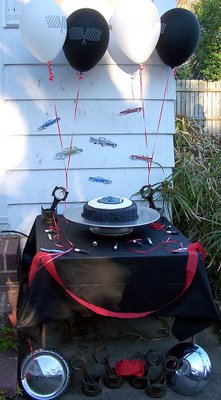 Here is the cake table. I wanted to make a cake stand out of pistons but it didn't quite work out. I used the pistons for balloon weights/decor instead. I also strewed spark plugs all over the table. I scanned and printed out a bunch of images of old cars and hung them up everywhere along with placing them on the edges of all the tables. I ordered a bunch of balloons with checkered flags and plastic cups with flames from oriental trading. also made a mixed CD with hot rod music to play during the festivities. 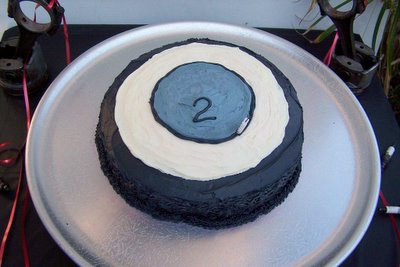 Here is his cake...It is a white wall tire! I know things look a little strange/missing on it but I 'paint programmed' out his name. It would have been on the top part of the hubcap. I strategically put the two candles in the same place as a valve stem. The side of the cake was tire tread textured, but it's hard to see in the picture (I used a plastic fork to achieve that). I wanted to bake the hubcap part of the cake in an actual hubcap, but I then realized that would have been waaay too big in comparison to the tire part of the cake, even if I cut down the hubcap part, it still would have been too big. I instead, just used icing and mounded it in a point in the middle (not noticeable in the picture though). I still want to try out baking a cake in a hubcap, one of these days. 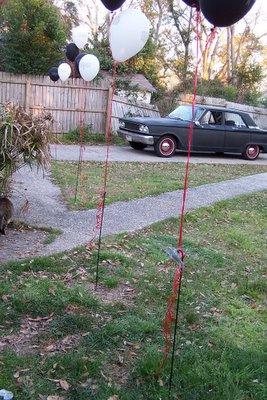 This is a view of the balloons along the edge of the patio. On most of the stakes, I put images of cars. Off the subject but...How do like the still-down-from-hurricane-Dennis fence? Can you say white trash? 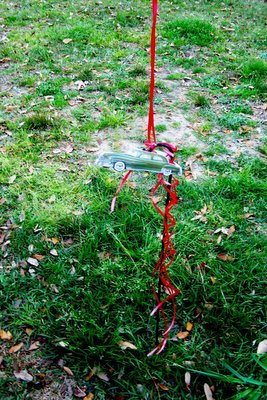 detail of one of the stakes. 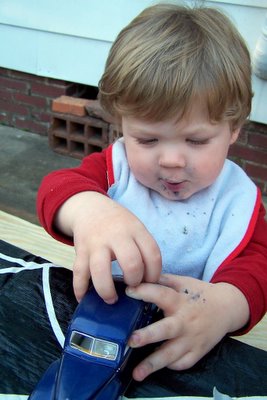 Here is pumpkinbutt enjoying one of his gifts post birthday cake...

After his party at the house he got to take a car cruise over to a car show in town. He excitedly pulled me around to all the cars pointing and saying "car, car, ooohh! car!". He really had fun there.

I will admit that the first part of his party was not fun...I am very pissed off about it still. My cousin decided to bring 3 of her friends that I have never met and were not invited (they looked VERY suspicious...Like....Would break into my house to steal the DVD player for drug money suspicious) ! When pumkinbutt saw them he started crying and didn't even get to enjoy seeing his party all set up with the balloons and all the cars when he first arrived....It was THE moment I was wanting to see happen but because of my cousin's need to hang all over her boyfriend at a 2 year old's party it's a moment lost forever. After my cousin and her friends left Pumkinbutt came back outside for the rest of his party. The last part went just fine..Except for me totally forgetting to get everyone to sing happy birthday to him! I was so into watching his reaction with the candles that it slipped my mind.
Posted by my house is cuter than yours at 3/06/2006

Cool party! You're such a good mama.

I'm sorry that the first part of the party was ruined ... but I'm glad he had fun overall!

Everything looks wonderful! I'm glad that the cake came out so well - tire treads - genius! Sorry about the first part of the party, but it looks like lil PB is having a ball post cake and with his cool hot rod in hand.

Great party! It's ok about the singing, it usually freaks the kids out any way. Is that an early model Corvair in your driveway? My first car in high school was a '63 Corvair, gods, I loved that thing.

Congrats on surviving 2 years as a rockin' mommy, you are doing great!

Awwww my Nephews 2nd birthday was on this past saturday and he LOVES cars also!!! funny!!

nice fairlane! we used to have one also. the party looks fab, sorry 'bout the first part - looks like your boy enjoyed though

Awesome party and cake! Can't wait til May for my boy's first!

happy 2nd bday pumpkinbutt! you are just too cute, and you're lucky your mom is so damn awesome and creative! just think of all the cool theme parties you have in store for your next 14 years!

I LOVE the cake and the theme Brilliant!!
Cool fairlaine as well, we've got a 62 Holden EK (Australian). Love checking out your site :)

what a great bday party!! love the invites, the cake, the whole shabang!

now this is what I'm talkin about! what a party. on behalf of my boy ezra, I'm taking notes... (birthday #2 is just around the corner in june)...!

Pumpkinbutt is adorable!!! And I would have loved to have one of your little skeletons....:-)

God that kid is pinchably cute! I think the invites would have looked adorable with the 'pumpkinbutt', lol. Love the cake and everything.