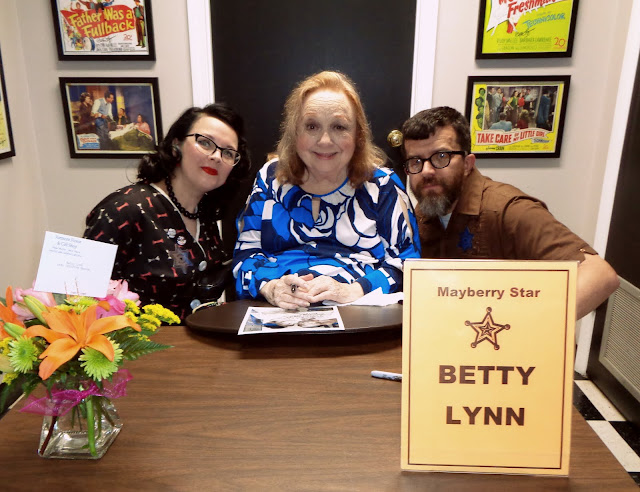 Exiting News!  Mr. Husband Sir and I got to meet Betty Lynn, "Thelma Lou" (or "Thelmer Lou" as Gomer called her) from The Andy Griffith Show!
Born August 29, 1926 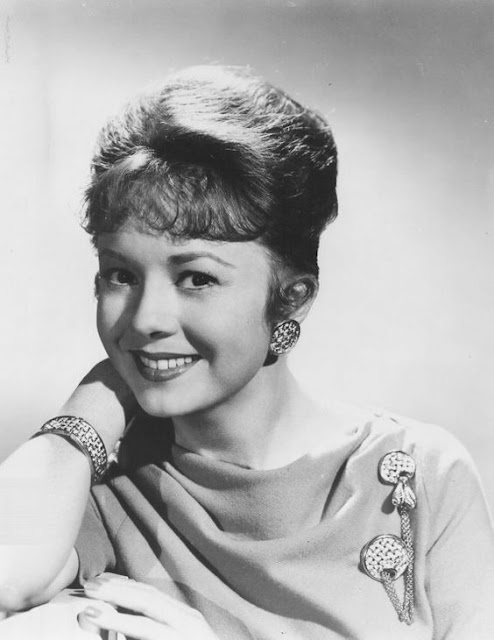 She makes an appearance every third Friday at The Andy Griffith Museum in Mount Airy, NC (now her home).
We have been trying to make it up there to meet her for years, but could never work it out with PB's school/summer obligations and Mr. Husband's work stuff.  Even going on June 15 meant only 2/3 of us could go.  PB would not be able to make it, however he gave Mr. Husband Sir and I his blessing to travel without him. 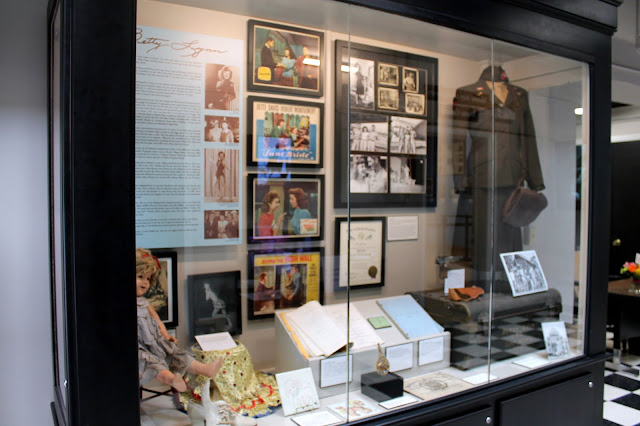 In the building Betty Lynn signs autographs there is an entire display case with memorabilia from her life sans TAGS (The Andy Griffith Show). 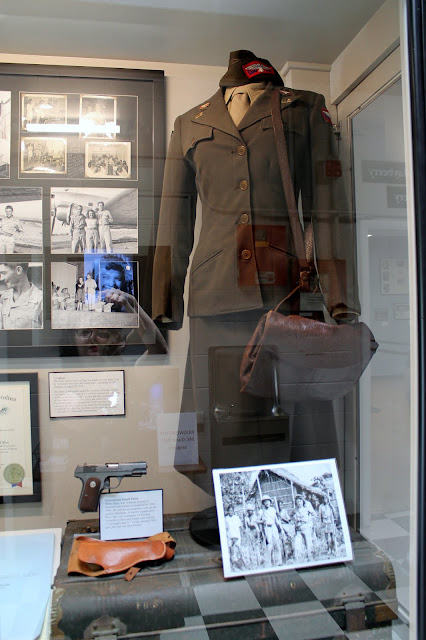 Although the display case is small it holds some amazing artifacts, corresponding photos. and information.
When she was 18 in 1944,  she joined the USO, singing and entertaining American soldiers in China, India, and Burma.  On display are her government issued uniform, trunk, and gun. 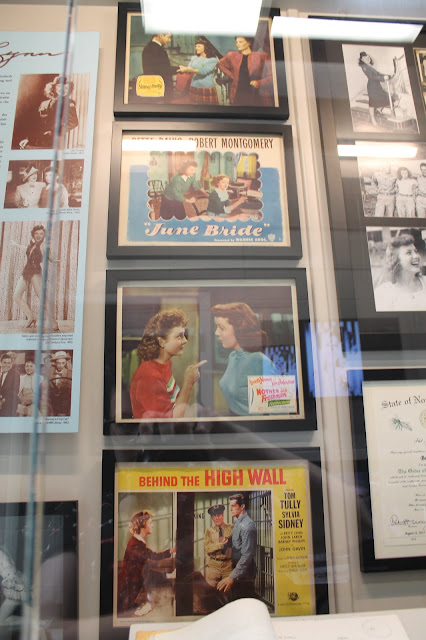 During the late 1940s through the 1950s, Betty Lynn costarred in various movies alongside others such as Bette Davis, Loretta Young, and Maureen O'Hara.  There are many original lobby cards from her movies in the display case and on the wall behind her autograph area. 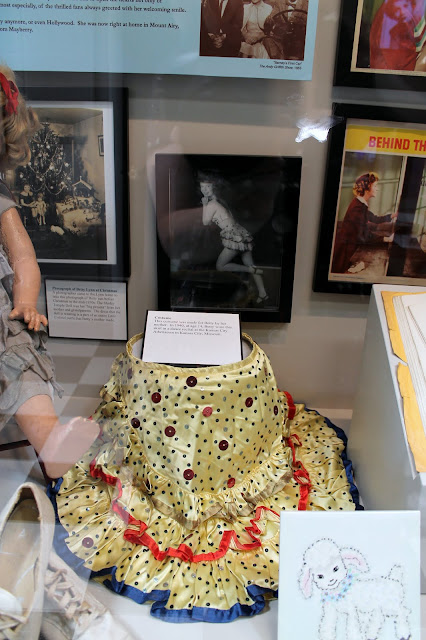 Off to the left is a Shirley Temple doll along with a photo of little Betty Lynn holding it from the mid 1930s.  The outfit the doll is wearing was sewn by her mother.  The yellow dance outfit was also made by Betty Lynn's mother for a recital when Betty was 14.  In the foreground are original designed and painted tiles for nursery rooms by Betty Lynn.  In 1952 she marketed and sold them to several major department stores in Los Angeles. 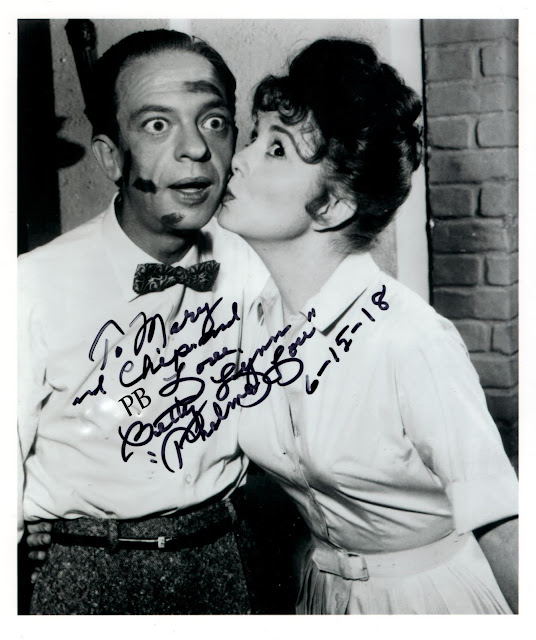 Our autograph from Betty Lynn.  (It has PB's real name, but I removed it for posting on here.) 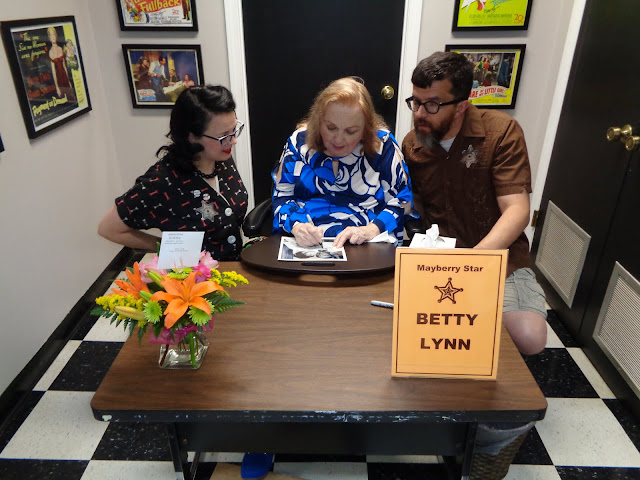 We got in line about a hour before she arrived, which was a good thing.  We were about 25th in line and by the time we saw and met her, the line of fans was out the door waiting, well over 100 people!

She was so sweet and took her time talking with us.  I super 1950s fixed up my hair and make up just to meet her.  She was so complimentary telling me how pretty I was and she loved my lipstick and on and on.  I was star struck and humbled by her kind words.  Mr. Husband asked her if she thought Thelma Lou knew about Barney and Juanita and she burst out laughing!   She then said she bet she did, it was such a small town.  We told her how much we love the show and watch it.  She said she does too and still laughs at it's comedy.
As many know, Mr. Husband Sir, PB, and I are massive TAGS fans.  This is our first time meeting a cast member and will remain such a highlight for us!

Here is a link with dates so you too can
Meet Betty Lynn!

Coming up in the next set of posts are highlights from our entire trip to Mount Airy, NC.
At this point in a post I would give a bunch of links to past related posts.  However
I have far too many that are about TAGS or Mount Airy (Mayberry) so I "tagged" most all of the posts with the label "Mayberry" as seen below to the left.
Posted by my house is cuter than yours at 7/23/2018

That's amazing, Mary! I know you will remember that meeting always!