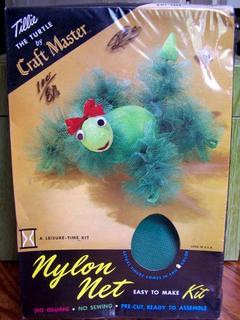 The little one and I were able to get out of the house and go to a thrift yesterday. I found Tillie the turtle in the craft area. I wouldn't have known she was suppose to be a turtle if the box hadn't told me, I would have guessed maybe a lizard though. I snagged it because it reminds me of scrap craft, only prepackaged (which really goes against the whole idea of scrap craft). It says on the box it is an "Easy to make kit with No gluing*No sewing*pre-cut, ready to assemble". I would guess it is from the late 60's. It was brand new and in the box still sealed (NOS to you ebayers) . Apparently the thrift store pricer briefly thought it could go for 2$, but that was then scratched out for the price of 1$.


"SIX FLUFFY FIGURES, YOU'LL WANT TO DO THEM ALL" 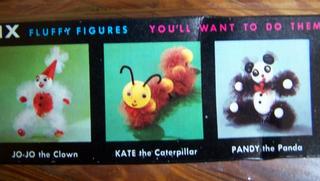 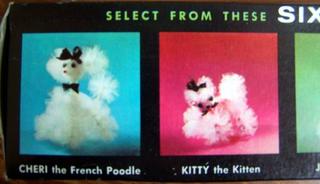 I really liked the photos of the other kits for ideas. However, who ever named the creatures didn't feel like getting too creative ...C'mon, "Kitty" the kitten?! 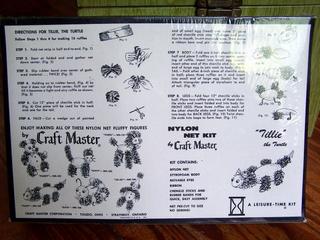 On the side of the package are recommendations as why you would want to waste your time on this craft and what uses it could have for you. "Adds charm to your home or car, swell for party decorations" So now we know who is to blame for the idea of putting up crap like stuffed animals in the back windows of cars!
Posted by my house is cuter than yours at 8/18/2005

Gosh you always get the goods... please tell me we get to make them at our next craft day because I have to put them up in the back of my Doom Buggy's window... to scare all of the kids when I'm driving down the street of suburbia

I love that turtle! I just found your blog from the apron gallery on flickr. Wow, we have so much in common. Yay, someone else who loves roadside architecture! And baking, and thrift shops, and...
Too bad you live across the country from me, or I'd love to be a "doll" too.