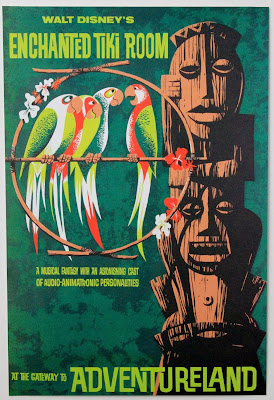 For Hub's birthday this year, PB and I surprised him with his very own private Disney's Enchanted Tiki Room! 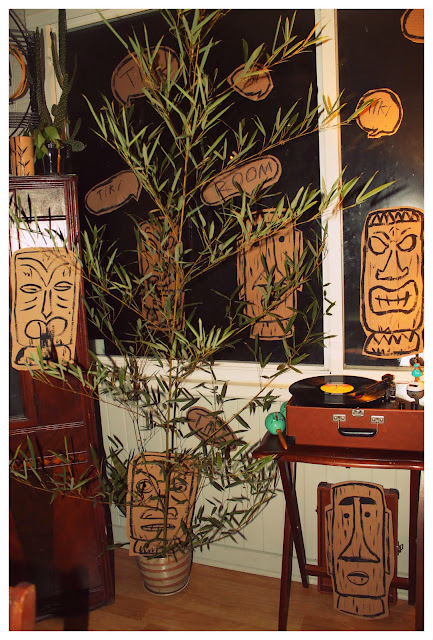 Spinning on the turntable is a Disney World/Land record with music from the park attractions.  We had "The Tiki Tiki Tiki Room" all cued up! 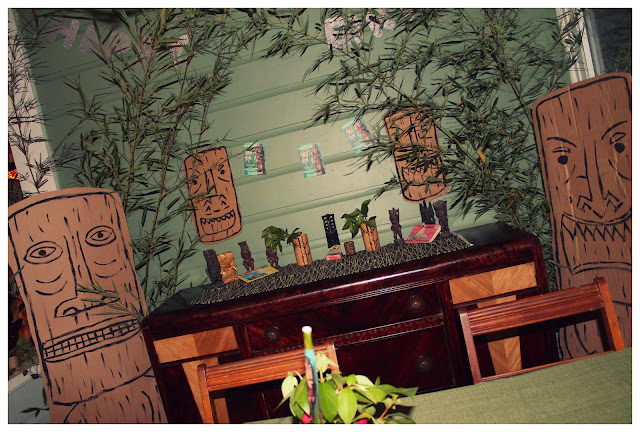 PB and I made and decorated everything in one day!  We chopped down large stalks of bamboo from our yard to bring inside and also dispersed tiki tchotchkes throughout the room. 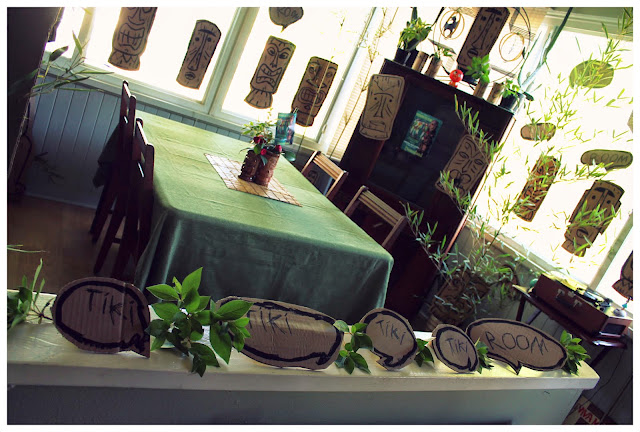 I got a bunch of large pieces of cardboard and used black tempera paint to render all the tiki heads and speech bubbles.  I then cut them out and tacked them up all over the dining room. 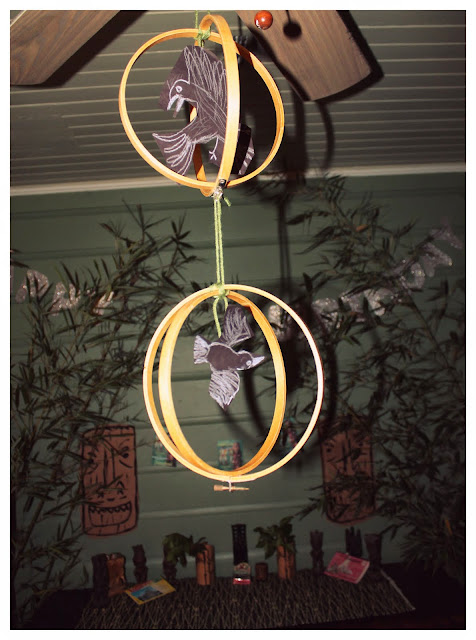 PB made these Tiki birds with hanging cages.  We decided to make crows instead of the typical tropical feathered creatures because that is Hubs preferred type of bird (well, that and fried chicken).  The cages are embroidery hoops held together with yarn.  We considered putting name plates under the birds (like in the original Tiki Room) but with depressing names like "Gloomy" and "Murky". 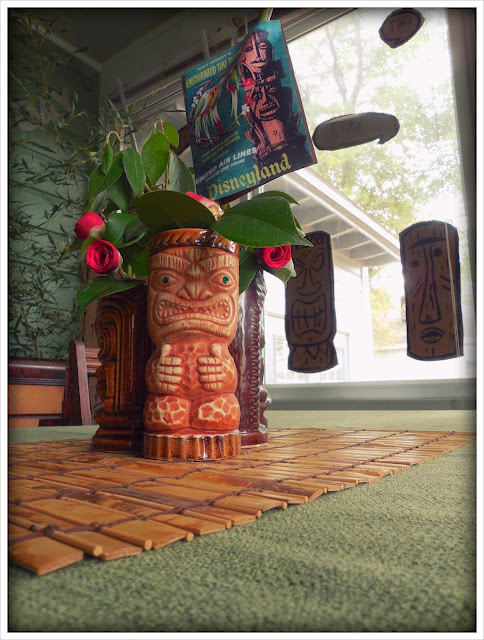 And now for the yummy part of the Tiki Room! 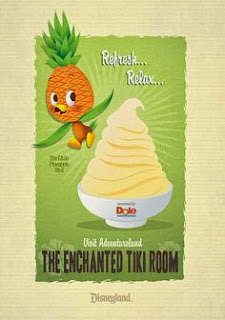 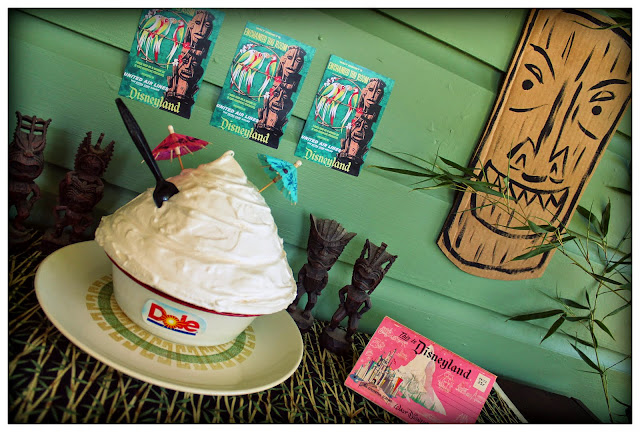 The best thing about the Enchanted Tiki Room is getting to have a Dole Whip!  I came up with a Dole Whip Cake for his birthday confectionery.  It is a pineapple cake with pieces of chopped up pineapple added to the batter.  I then iced it with cool whip that had pineapple juice added.  I baked the cake in one of those Wilton pans that is suppose to be the bottom section of a hoop dress, it's kinda dome shaped and you stick the torso section of a doll in the top. I placed the cake on a plate and put this on top of an enameled dish with the Dole logo on the front. 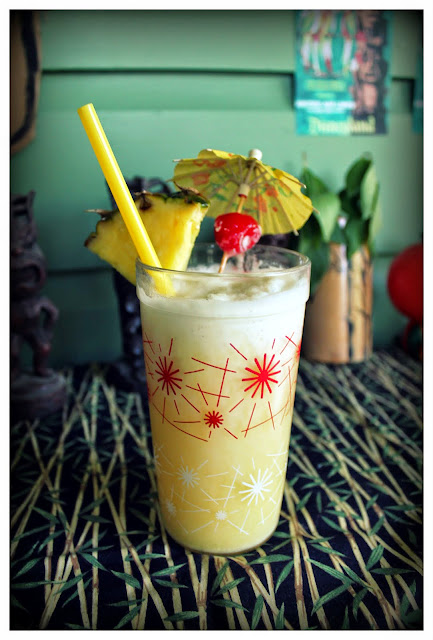 I also made homemade Dole Whip Floats!  I started by slightly defrosting a carton of vanilla ice cream.  I then mixed the ice cream with pineapple juice together in a ziplock bag and refroze it. The plan was to snip off the corner of the bag so I could squeeze it out looking like soft serve.  It didn't quite go down like that so just I served it in a glass with additional pineapple juice and garnishes.

A little bit of history on The Enchanted Tiki Room: 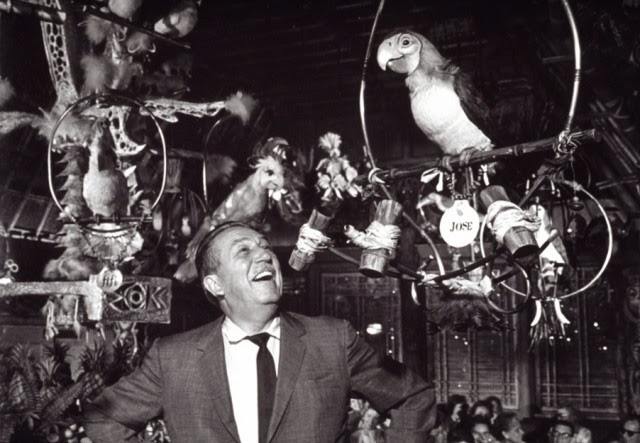 Walt in the Enchanted Tiki Room at Disneyland.

The Enchanted Tiki Room opened in 1963. It was first sponsored by United Airlines which at the time was a perfect fit.  Hawaii had just become our nation's 50th state in 1959 and all things Polynesian were on the forefront. Dole took over sponsorship in 1976. The Tiki Room was originally planned to be a restaurant with the show as the attraction (this is why Disneyland's Tiki Room has it's own bathrooms) .  This proved to not be practical with the time and guests demands however.  It then was decided to become a 17 minute musical revue (all of the music and lyrics are by the ever talented Sherman Brothers) featuring a cast of over 250 audio-animatronics.  The Enchanted Tiki Room was said to be Walt's favorite attraction. He would come by and enjoy the show, asking guests"...so what do you think of those birds?! The rain scene is something, huh?" 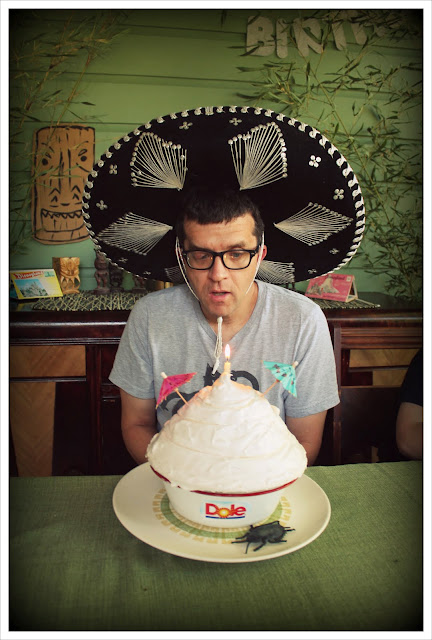 To see a couple of Hub's past birthday celebrations see below:
WWII Ration Birthday
D'oh! Simpsons Birthday
Posted by my house is cuter than yours at 5/15/2015