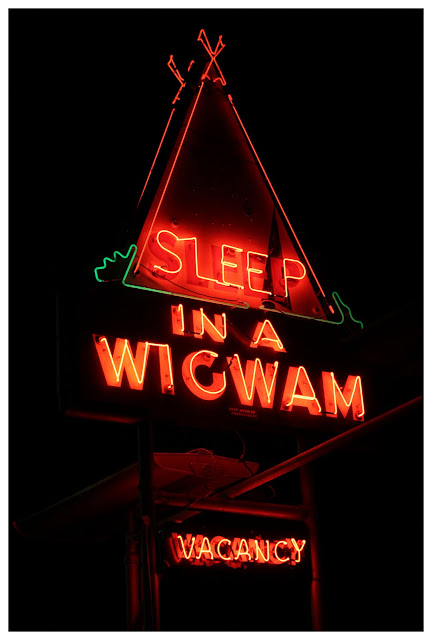 We were living it up like Indians for a night during (appropriately) the week of Thanksgiving! 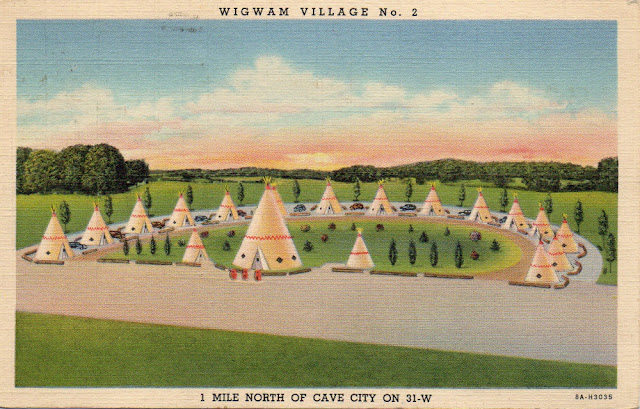 We "Slept in a Wigwam"! in Cave City, Kentucky. 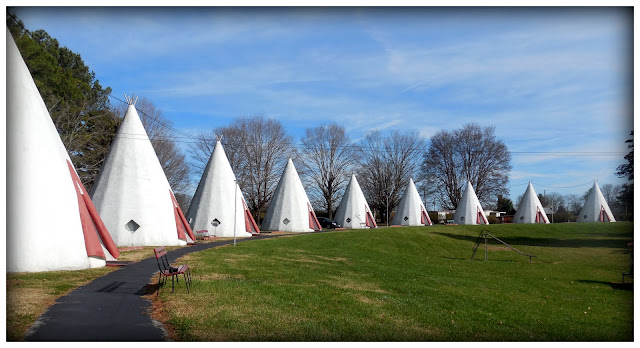 The Wigwam Village is from the mind of Frank Redford.  He built his first one in 1935 in his hometown of Horse Cave Kentucky.  Next came # 2 (where we stayed) in 1937.  Over the next decade or so he built/franchised a total of seven villages located in Alabama, Louisiana, Florida, Arizona, and California.  Three are still functioning being in Cave City, Kentucky and on Route 66 in Holbroke, Arizona and Rialto,California. 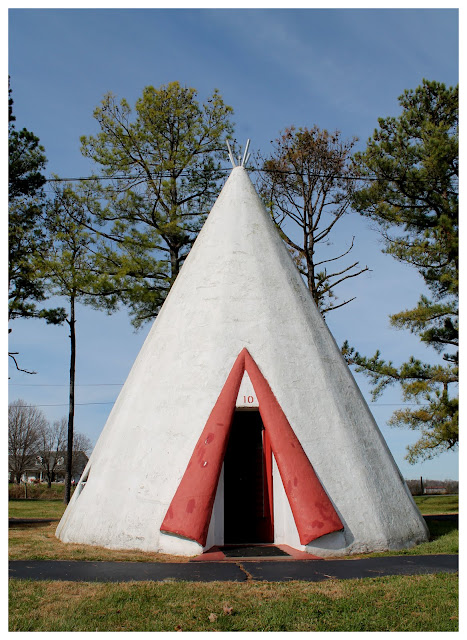 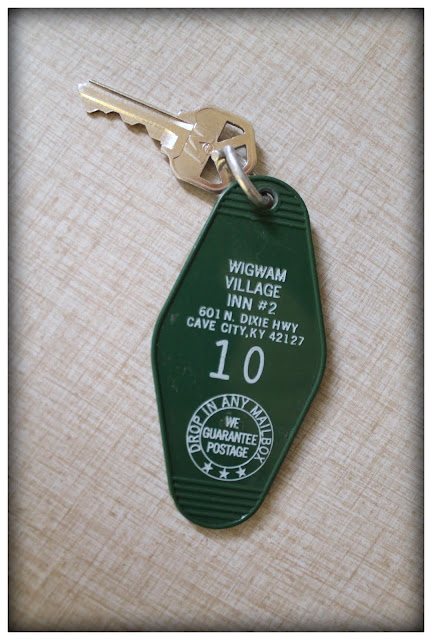 The owners are very nice and even gave us a keychain with # 10 on it for free! 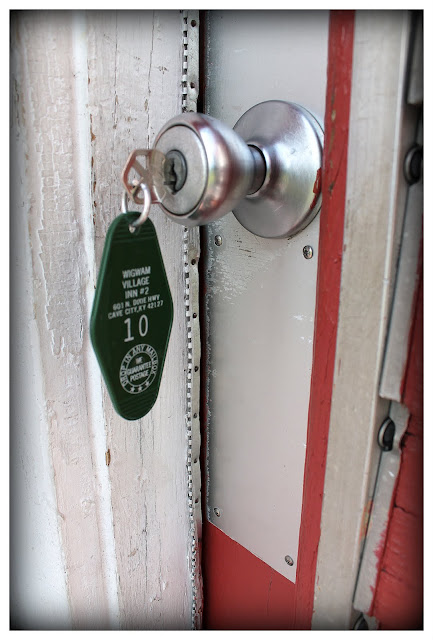 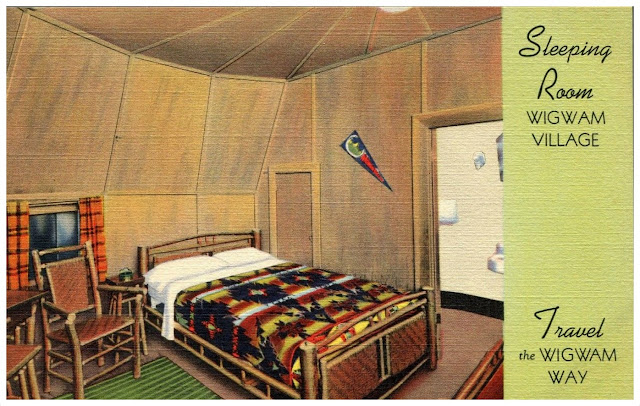 Yes... They still have the original 1930's hickory and cane furniture! 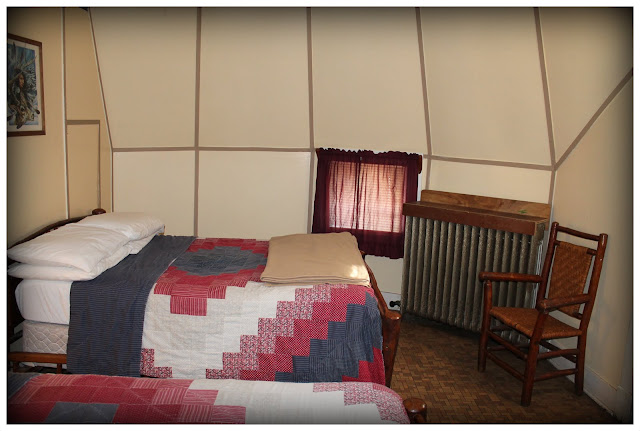 The base of each wigwam is 14 feet wide and the top reaches to 32 feet. 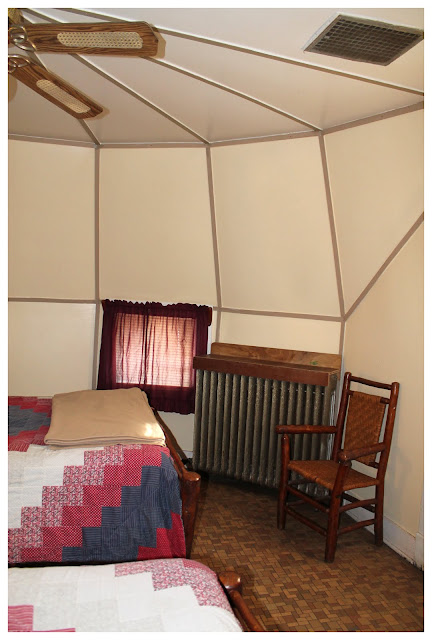 An image showing the wall arching in.  I personally think there is a lot of wasted space above the ceiling and thought that it would be fun if there was a small loft and a lookout window up there for kids...and me. 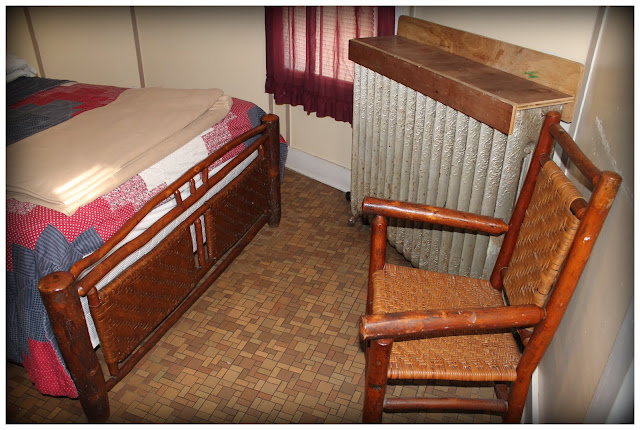 That radiator didn't work, unfortunately.  All we were supplied with was a little space heater which had it's work cut out fighting the 29 degree temperatures outside the flaps. 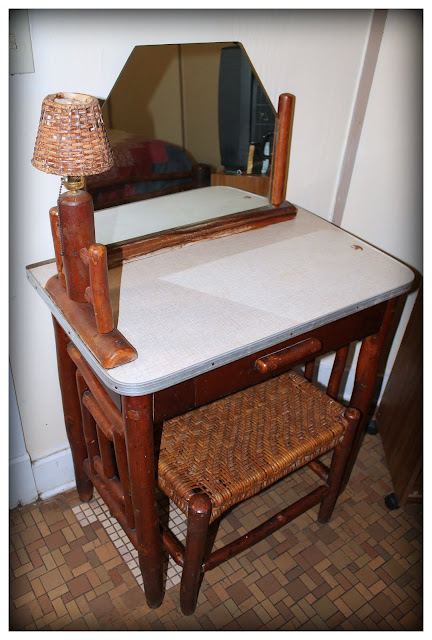 The vanity with it's lovely linen Formica top and aluminum edging!  I was going to set the lamp aglow but decided against it when I saw the exposed brittle old wiring showing inside the plug...that would have became a different way of setting everything aglow. 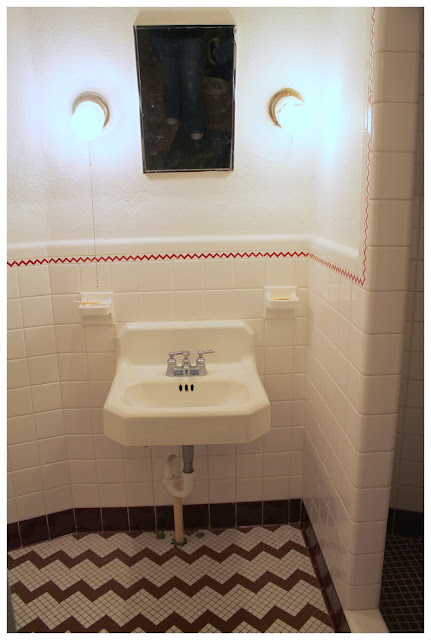 I love the bathroom! 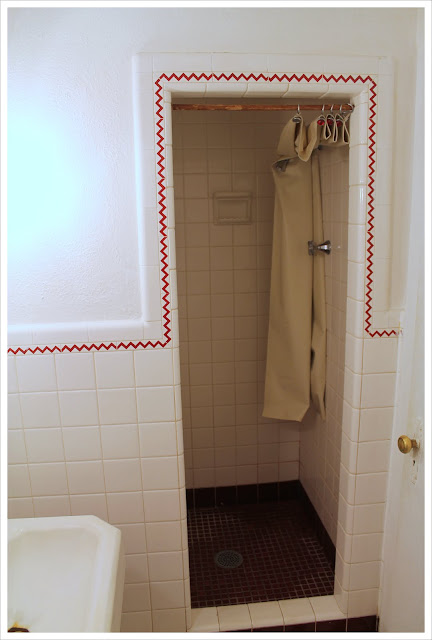 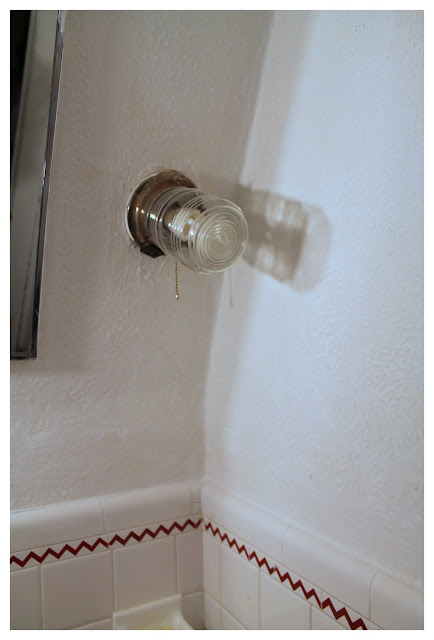 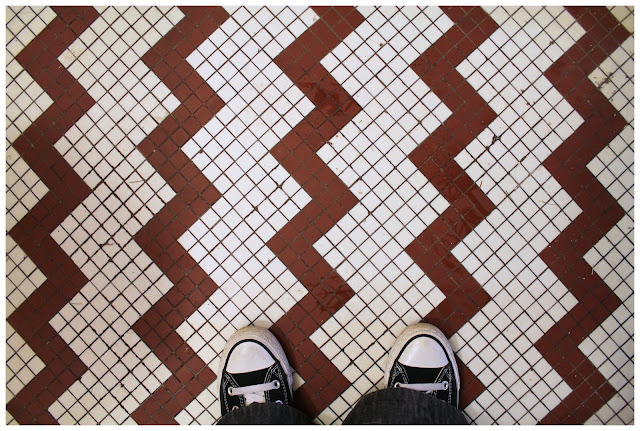 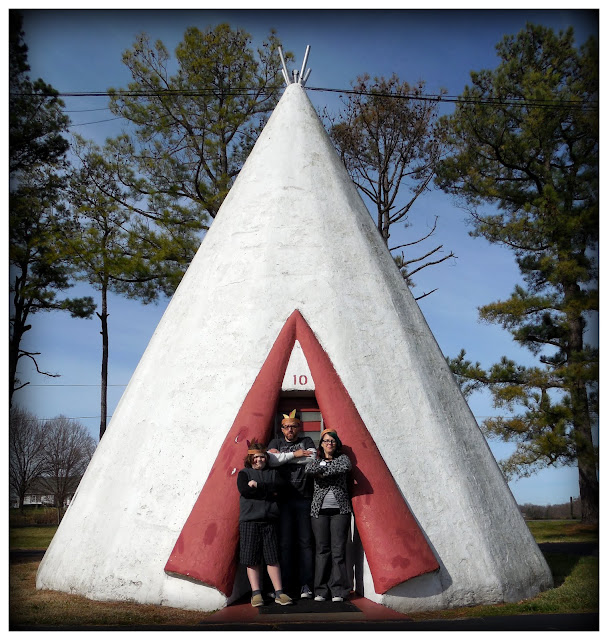 We made construction paper Indian headdresses with personalized names as part of the whole wigwam experience.  PB was 'Chief Screaming Chicken', hubs was 'Stumbling Badger', and I was 'Squaw Fussy Britches'. 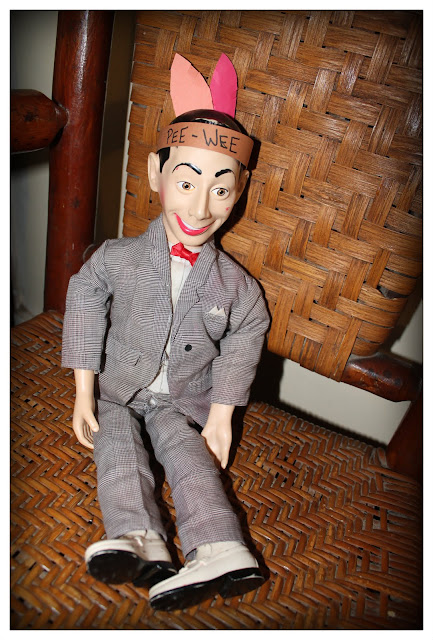 Pee Wee came along and had his own little headdress too. 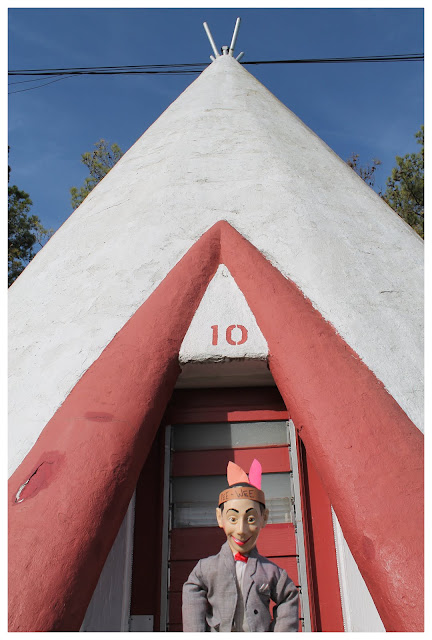 He got his pic done in front of the wigwam as well.  He is 'Chief I know you are but what am I?'. 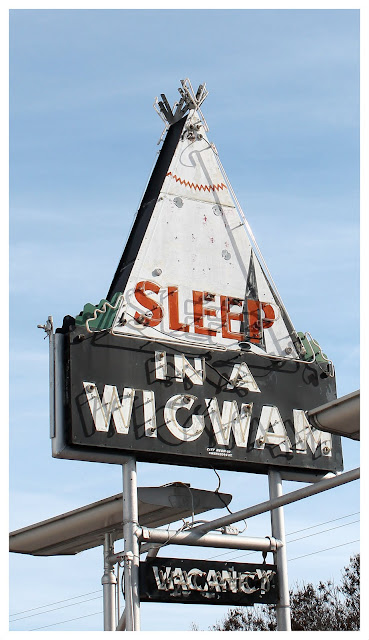 The unlit neon during the day. 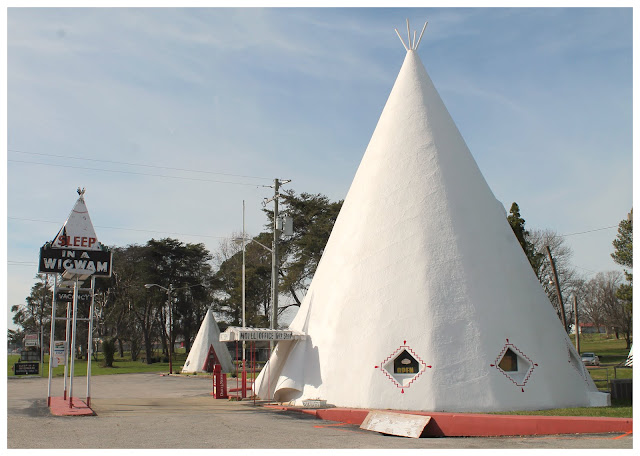 There is a massive sized wigwam in the front of the village (52 feet tall).  It used to serve as the office, a gift shop, and a small restaurant. The larger wigwam was built a little bit before the village and sold gas.  Off to either side of the large structure are smaller wigwams that were the bathrooms. 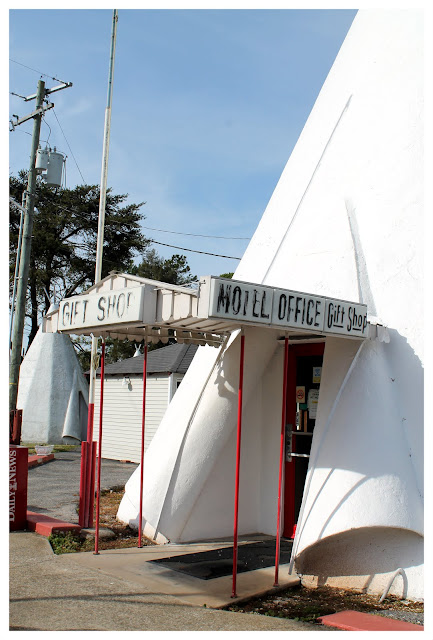 Looking inside there are gift shop kinda stuff visable but it wasn't open...I don't think it is ever open truthfully.  The owners live in a house off to the side and that is where we checked in/out. 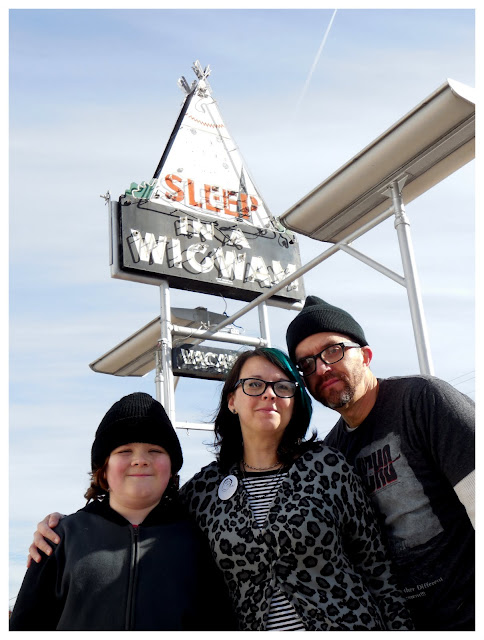 Here we all are.  I guess the boys had the thought of knocking over a few liquor stores while we were in town given those stocking hats on their heads.

Here's something extra fun.  I stayed at these wigwams 14 years ago and have a few scanned images of  'before' and 'after'. 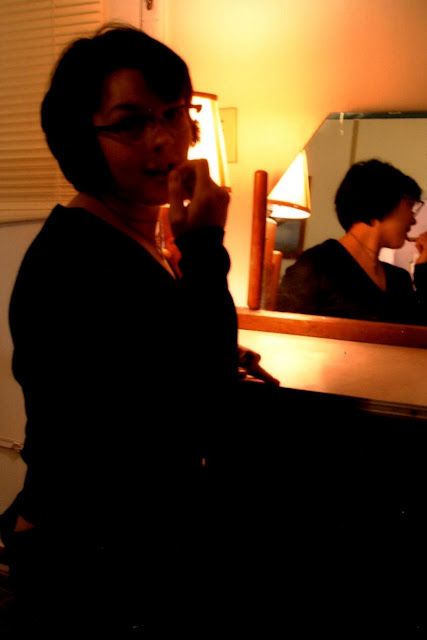 Circa 2001. Sitting at the vanity lipsticking. 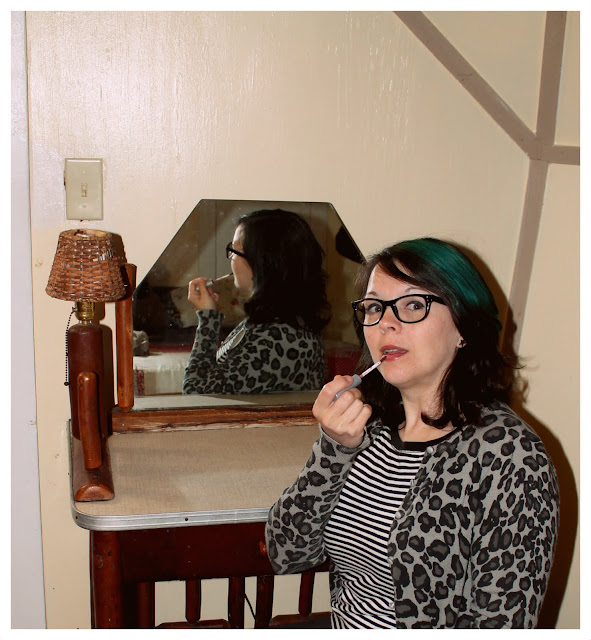 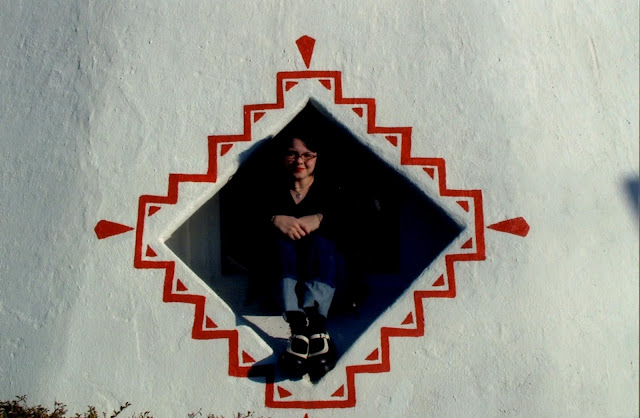 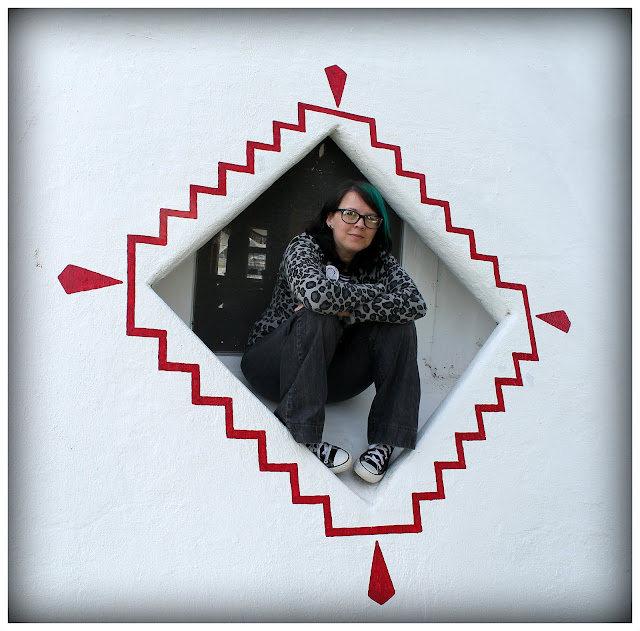 I highly recommend a night in a wigwam if you are into nostaglic roadside attractions and enjoy an adventure.  I do not recommend it to those who need working phones (there are no phones) or reliable wi-fi (that's the best part to me! No wi-fi! yes!) or, well, adequate climate control.  We just brought extra blankets and slept in a pile together, probably the way the Indians used to!
Posted by my house is cuter than yours at 1/03/2016