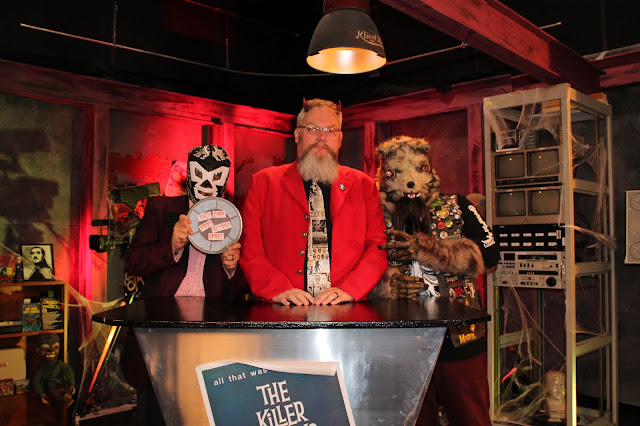 "Shoot what ever baloney you want, just make sure it's seven reels long!"

I have mentioned a few times in the past that Mr. Husband Sir is part of a horror host show called Nightmare Theatre (Mr. Husband Sir as El Sapo, along with The Baron and Mittens the Werewolf).  It started off 17 years ago with them propping up a camcorder in a stationary location (probably on a pile of girly magazines) and one of them pressing record before appearing on camera themselves.  No fancy camera angles, no multiple takes, no staff and no budget.  But for what they didn't have in materials was well made up for in talent and humor. They have had the show on the TV air waves of all the local and free access stations they could arrange.  They also have live shows at local and regional venues presenting great music/bands, costume contests, freebies, and a feature movie presentation every October.

The most recent and biggest thing to happen to Nightmare Theatre just wrapped up a couple of weeks ago....They are going to be on our local PBS station for an entire season!
A set on a sound stage was built for them with real lighting affects, not a corner of our house with a table lamp and a colored bulb in it as normally would happen.  They had a paid staff including a camera crew with directors and editors, normally they would recruit family and friends as free staff and actors...well, actually that did still happen....
Sounds expensive right?!  Luckily the money came from a generous donation by a local entrepreneur who happens to have an interest in movie memorabilia.  Side note: The actual Nightmare Theatre crew and 'staff' received no monetary reimbursements.  What a bunch of maroons!

So 13 NEW and amazing episodes are on their way premiering Oct 27, 2018 at 10 pm (showing on PBS Florida panhandle and possibly also Alabama as well)! 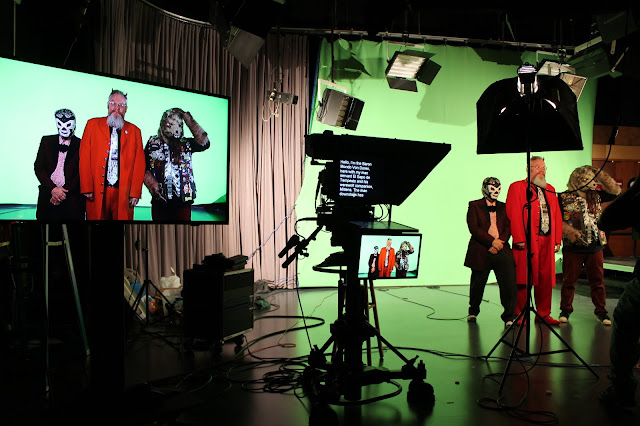 Here they are doing some green screen work for promos.  Even have a teleprompter, fancy pants!
I had several involvements and roles myself in/for the show.  I was prop master, creative contributor, stage hand, photographer, and an extra.  PB will also be on two episodes. 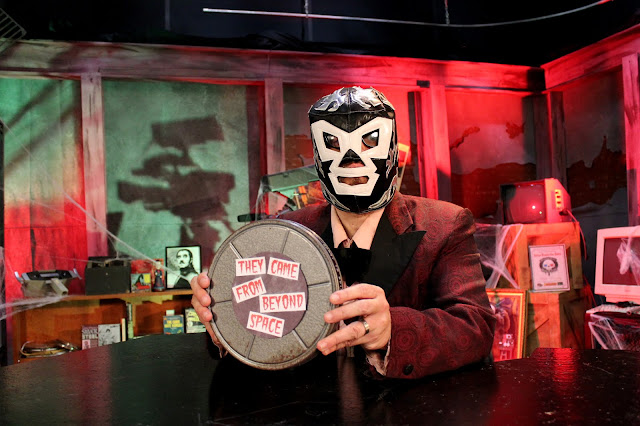 Almost (more on that in a moment) all of the filming is wrapped up and now the station is working on the editing.  At the beginning of November there is going to be a live event premiere at the station with a tour of the set, photo ops, and a screening of an extra bonus Nightmare Theatre episode....
Plan 9 From Outer Space!

I don't want to give any spoilers away, so for now I have to keep a lid on it about the props and segments...but I will be definitely posting about everything when it's a go.

Here is the Press Release from the station with an incorrect list of the movies.