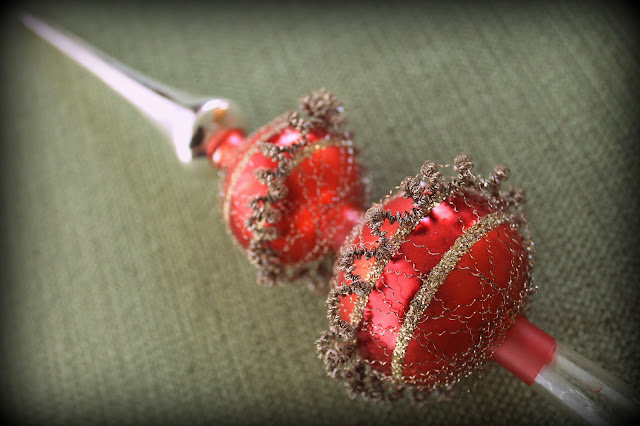 Most of my vintage Christmas stuff is really "junk".  It's stuff that was made cheap and was sold cheap at 5 and 10 stores decades ago.  By the time it comes to me it's been banged around Santa's sleigh a number of times.  This tree topper however is kinda fancy I think.  It is delicate glass with scraggly wire wrapped all over it.  The tip of it is broken though so it fits in at my house nicely.  It was part of the bag of stuff I bought from a thrift for 5 bucks total.

Update:  I discovered that the tip of the topper isn't broken!  It's suppose to have a tinsel streamer coming out of the open end!  See serving suggestion below:

That's a little bit too frou-frou for me though.  But it makes me wonder if the missing piece was in the bin at the thrift store...
Posted by my house is cuter than yours at 12/12/2018